Late last week it was announced that two nightclub comics whose work I had enjoyed were dead. Nostalgia buffs mourned Charlie Callas on Friday, but were then diverted by the announcement of the death of impressionist David Frye. The interesting thing I found in researching them is that both comics were represented by precious few clips on YouTube, given the amount of TV work they did (especially Callas); also that the YouTube reposters who put clips back up with their own commercial message in the “About This Video” comment box had decided to repost some of the Callas and Frye TV appearances (ah, the fleeting spotlight of fame…).

One of Callas’ best routines was a long shaggy-dog story about two “nervous” (read: shaky, twitching, moaning, noise-making) hunters. Charlie performed it on a Sixties variety show (which I think is Hollywood Palace) and he performed it on The Johnny Cash Show, but I believe the seminal telling of the tale was on the 1984 Jerry Lewis talk show on Metromedia:

Charlie had earlier had a supporting role in Jerry’s wildly uneven movie The Big Mouth (1967):

Here he does his Georgie Jessel bit on Dinah Shore’s daytime show (and yes, that is Roy Rogers sitting to Charlie’s right):

Here’s a lengthy Godfather routine, apparently performed on The Tonight Show, which, it was noted in every one of Callas’ obits, he was banned from, when he playfully shoved Carson on-air in 1982 (Johnny could be a vindictive son-of-a-bitch if he wanted to be):

Another Tonight Show fragment, with Charlie commenting on men’s magazines:

And lastly, to show that in show biz, you gotta do a little bit of everything. Charlie was not only a professional drummer before he became a comic, but he could also successfully carry off an act no one does anymore, spinning plates!

I regret not having bought Charlie Callas memorabilia on his official website, which featured his artwork, info about his drumming, many lovely pics of his wildly cartoonish mug, and is now gone forever. He had a wonderfully bizarre-looking drinking mug with his face on it. Oh, these folks who tell us that “that stuff will always be available on the Internet….” 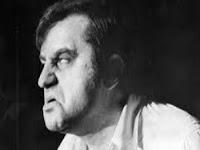 As for David Frye, what was most interesting about him to me is that I noticed he was one of the few standup comedians in the Seventies who made certain to credit his writers on his LPs. Now certainly there were comedians who wrote all their own material during that era, but there were a lot who didn’t (including some key, very famous ones) and never credited their writers, but Frye always did (one of them was a young Gabriel Kaplan).

Frye was a vigorous impressionist who, like Frank Gorshin, literally twisted his body and face to really *become* the person he was imitating. His three most famous impressions were Lyndon Johnson, Nixon, and William Buckley, Jr. — in each case, he literally did become a living cartoon of the person, showing their mean, pretentious, or conflicted sides as he impersonated them.

Here is Frye when he was first attracting notice, on The Smothers Brothers Comedy Hour in 1967:

In the Seventies, by the time Nixon was out of office, Frye was still doing mainstream TV variety show guest shots, but his material was more unsteady, as here, on the awful Dick Clark show Live Wednesday (I remember this show, and man, it was a loser). He does brilliant new impressions that fit the time (Jack Nicholson, Rodney Dangerfield, etc.), but he has no material to go with the accurate impressions:

And here is Frye’s most recent promotional video, an item where old clips are supplemented by him doing George W. Bush, Jesse Ventura, and Dick Cheney. I really don’t remember seeing Frye on TV after the Nixon era, but from his obits it was apparent that he kept on trucking and worked steadily in his adopted hometown of Vegas, updating his impressions every few years:

To end on an up note, here is some audio from the wonderful late 1980s Steve Allen AM radio show (which aired on WNEW with cohost Mark Simone), with Frye doing a number of impressions for Steve, who was always the consummate straight man: