Joe Sarno, who died earlier this week at 89, was one of the most unique figures in movie history, simply because he evidenced true talent in the pretty murky business of sexploitation, where having talent is something of a liability (and largely unnecessary). Sure, there was Radley Metzger, the king of artful Euro-chic soft- and hardcore, an incredibly talented (and yes, occasionally “incredibly strange”) filmmaker. There was Russ Meyer, who was one of the finest film editors there ever was, in any genre. Findlay was fascinating; Wishman unpredictable and mostly amusing; Friedman and H.G. Lewis thumbing their nose at the whole silly thing. 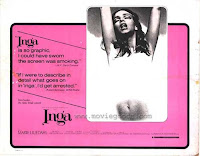 But Joseph W. Sarno, as he was often billed, was a guy who made dozens of softcore features in the Sixties and early Seventies, and he invested them with an identity. He had a very distinct look to these features (particularly the ones in b&w), and he wrote screenplays that included ample amounts of sex, but also contained an element that you just were not going to see in conventional adult cinema, which was guilt. Joe started making films in Sweden in the Sixties, and his films are very much in tune with Bergman and the Scandinavian cinema of the time (in fact there is very little chance you’d guess his biggest hit, Inga, was directed by an American).

I interviewed Joe three times, and sadly the one that aired on the Funhouse TV show was perhaps the weakest chat of the three, as his memory was very poor when it came to specific details about his films. Granted, the man made as many as a half-dozen films in certain years, and continued to toil in the sex industry on hardcore films/videos that had no personal content from the mid-Seventies to the late Eighties (a fact he concealed, and talked around, in our interview). When I later interviewed Joe, I knew to avoid trying to get specific details on specific films from him, and instead just discussed his memories of making films under severe budgetary constraints, and had him speak about his writing and crafting of images.

My last interview with him was in person at his apartment, when I was writing the DVD booklet notes for his “comeback” feature for the New Jersey mini-studio Seduction Cinema, Suburban Secrets. The film was quite a bizarre and welcome move from an old pro: a very low budget feature of the kind he was used to, but with an original script by Joe and “final cut” on a director’s version of the material. What the company wound up releasing was pretty much unprecedented: a two-disc set of the “hot cut” of the material (the cable 90-minute film that emphasized the sex sequences), and a two-and-a-half hour (you didn’t read that wrong, two-and-a-half hour!) “director’s cut.”

In any case, I don’t think I can further describe the tenets of Joe’s style better than I did in the booklet for Suburban Secrets, so I will excerpt here some of what I wrote there (noting that this was first published in 2006 in a Seduction Cinema release, and appears here with the written permission of the author and publication of first instance.) We start off at the point where I’m mentioning a major part of Joe’s appeal, as a filmmaker and as a person, his sincerity. Probably the key aspect here is that Joe was a genuinely nice person, who happened to have made some uniquely kinky movies. Which is never, ever a bad thing.

*******
Revelations drive the storyline of Suburban Secrets, but the key “secret” here is that this feverish sex picture is the product of a genuinely sincere moviemaker who is 84 years of age as of this writing. Erotica is considered a young man’s game, although anyone familiar with Antonioni’s later works (Identification of a Woman, Eros) knows that an artist over 70 can still produce blissfully carnal works of art.

Sarno’s earnestness may cause some folks to be amused by his highly stylized approach, but the fact of the matter is that Secrets contains several object lessons for the younger directors who create “steamy” fodder for the delectation of late-night cable viewers and DVD renters with an eye out for “couples” erotica (those wanting to “get her in the mood” or, conversely, “wake him up”). So take a lesson, young pornographers, as Professor Sarno imparts his secrets: 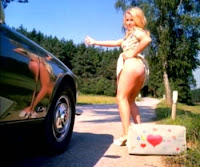 Ditch the “mood music” and flashy editing. “I’ve had a number of producers who were embarrassed by the films I made, because the sex looked so real to them,” declares Sarno. Although his 1970s softcore work is notable because the actors were often having real sex onscreen (as in the Girl Meets Girl Trilogy, distributed by Retro-Seduction), Sarno emphasizes that he has no problem working with the present-day limitations of the softcore genre, the so-called “three Ps”: no penetration, no penises and no “pink” onscreen.

“Even in a film like Abigail Leslie…, the sex was really what I call ‘assumed contact.’ I work with my actors to regulate their breathing as it would be under a sexual situation. If you do that, work on the sounds and the breathing, you get the feeling that it’s real… that’s what I’m looking for.” Thus, Joe has no use for the faux-jazz and rock music used in standard sex movies. He also favors “long takes” which keep the action moving at a steady pace, and contribute what he calls “a certain truth” to a sex scene. 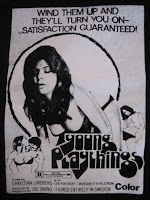 Vary the angles in sex scenes. The long-take sex scenes requires that the actors change position in the frame as they proceed to the nearest bedroom; at one point Laura and Aunt Cynthia move to the background of a shot as they grope each other towards a doorway. Unconventional framing like this brings home to the viewer the fact that the characters will literally stop at nothing to satisfy their lust.

When a character’s not having sex, they should be obsessing over it. Here the “expectation” factor that is a trademark of Sarno’s work kicks into high gear. His central characters often are so intent on getting into each other’s pants that they talk obsessively about their intended’s anatomy or just fixate on it while attending to daily tasks.

Ignore the prevailing attitudes about age and body types. Sarno has made a practice since his black-and-white “swingers” pics in the early 1960s of using older actresses, as well as thinner women and the occasional zoftig babe, as sex objects. Here Joe is ably aided by Seduction Cinema’s very appealing stable of “natural girls”: Suburban Secrets features curvy chicks, ultra-thin vixens, and an immaculately hot fiftysomething character whose passions rival those of her twentysomething niece.

Aspiring filmmakers can learn a lot from Sarno, but there are certain elements that are unique to his work. Chief among them is his stylized dialogue, which combines street sex talk, whimsical words (like the Yiddish shtup) and melodramatic declarations like Cythnia’s frank, “I’ve always worshipped at the altar of my own intense orgasms….” One sees echoes of great filmmakers like Bergman in Joe’s work, but his dialogue reminds us that his softcore was influenced more by the great playwrights — Ibsen, O’Neill, Williams – who created “hothouse” environments for their tormented, lusty characters. He explains that his dialogue is “intended to be a little above reality. What the audience hears is the tone of the words, and that’s what I want.”

The last, most important, element of Suburban Secrets is its controversial subject matter. Sarno has dealt with incestuous relationships in a few of his previous films — from his 1969 Swedish feature The Indelicate Balance (found on the Seduction of Inga release from Retro-Seduction) to Confessions of a Young American Housewife (1974) and Abigail Leslie… (1975). He included it in this film because “this situation happens more than you think. In high school, a friend of mine was involved in an incestuous relationship with his mother. I was with him so much it was obvious, I knew something was going on. I base the sexual situations in my films on things I’ve seen, things I’ve heard over the years….”

There is also the matter of the female characters’ frank discussion of their teenage, and even preteen, encounters with sex. Contemporary “indie” filmmakers like Todd Solondz (Palindromes) and Gregg Araki (Mysterious Skin) deal with this theme in honest, open ways in their works, but for a softcore director to introduce it in his dialogue is challenging and unusual.

“The hardest thing about that is to say to yourself, ‘am I willing to go into it, and should I?’ I always say to myself, yes I should. I’m not looking to titillate anybody as far as that’s concerned, but I think you can utilize this subject to make a good story….” Asked if he has considered the response this topic provokes in more conservative souls, Joe replies curtly, “I’m not afraid to terrify people. I utilize those little thoughts in the back of people’s minds, and bring them to the fore….”

From my interview with Joe:

From my interview with Joe, about one of his most intriguing creations, Young Playthings:

And a scene from the film (no good copy of the picture has of yet been found in the U.S.):

And from one of his favorite films, Abigail Leslie is Back in Town (aka Abigail Lesley...):

The Curse of the Black Sisters AKA Vampire Ecstasy AKA The Devil's Plaything AKA Veil of Blood is one of the best European lesbian vampire films made during the seventies!