Of drinking songs and the "Aintree Iron": I'm led to the Scaffold 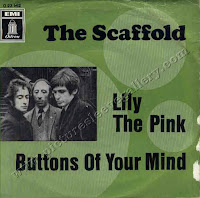 When I interviewed Neil Innes (more info above!), he brought up a British band that I had heard for what I think was the first time ever earlier that very day — the oddly organized site that is Pandora.com had supplied me with “music that is related to” the Bonzo Dog Band, and thus I was presented with the insane catchiness of the Scaffold. It turns out Innes wasn’t just personal friends with the members; his second post-Bonzo band was in fact GRIMMS, which was composed of the three members of the Scaffold, himself, a gent named Andy Roberts, and the one and only Viv Stanshall.

The Scaffold existed off and on for 11 years (1966-77), and was composed of a trio of Liverpudlian poet-songwriters who sang their own material but played no instruments. They were Mike McGear, Roger McGough, and John Gorman; McGear’s name was actually McCartney, and he was indeed the brother of that guy Paul. It is noted on the group’s Wikipedia entry that on their early records they were backed by, among many others, Graham Nash, Jack Bruce, Elton John (still named Reg Dwight at the time), and Jimi Hendrix.

All the above is merely trivia — what matters most is the insane catchiness of the band’s four best-remembered songs. Three of them function as drinking songs, and all of them have a chorus you can not forget. In the case of their first big hit, “Thank U Very Much” (spelled that way three decades before Prince and four before texting), I was familiar with the song, but as covered (and lyrically altered for American viewers) by the Smothers Brothers on their Sixties variety show.

The phrase “Aintree Iron” means nothing to Americans, and I found that most English folk can’t even agree on what it means: it is noted on various sites that the phrase could refer to a noted English footballer, an area in Liverpool, or Brian Epstein! In any case, the song’s chipper hookiness can’t be disputed. You do know you’re listening to something from the Sixties when the singer brings up both “the family circle” and the napalm bomb as things to be thankful for.

A Scaffold song that is both catchy as fuck and also has the simplicity of a kids tune is “Gin Gan Goolie.” And the band’s last chart hit was a sort of anthem for their hometown, “Liverpool Lou.”

The one that got me, though, was this totally bouncy ditty that pays tribute to Lydia Pinkham’s pills for women. It’s called “Lily the Pink” and a somewhat awkward live TV performance of it can be found here, but the recorded version is the one that will stick in yer head. Never has the phrase “medicinal compound” been used so musically (then again, this was the Sixties…).