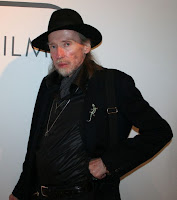 Most American film buffs know of the big troika of New German Cinema directors (Fassbinder, Herzog, and Wenders), and those who haunt the rep-theater circuit also know Schlondorff, Straub, and even Syberberg. Of that very loosely knit group of filmmakers, Werner Schroeter remains a mystery to American viewers.

Schroeter, who died of cancer this week at 65, was a busy “underground” filmmaker in the years 1967-1972, using the wonderfully named Magdalena Montezuma as one of his stars. He not only made films during this period, he also acted for Fassbinder, Wenders, and Rosa von Praunheim. During the period that the New German Cinema was getting much attention in America, we didn’t see Schroeter’s films so much as hear about them. His most noted film, The Rose King,was released in 1986, after the “new” German filmmakers had pretty much been absorbed into the mainstream of European film production. He only made five films after that one, and I thankfully was able to see at least two of these, because of the presence of Isabelle Huppert (who is one of the few European names that can still get films at least a cursory showing in the U.S.).

The only word that can encompass Schroeter’s filmmaking style is “operatic.” The narratives of the both of the Huppert films, Malina (1991) and Deux (2002), are multi-faceted and function as a Cubist painting or a novel from the nouveau roman school would. In other words, you are given the raw elements of a plotline, in fact several plotlines, and you can choose to assemble them yourself or just revel in the imagery and raw emotion. Unlike Straub, who strips storylines of all of their action, Schroeter only emphasizes the emotional and overpowering actions in these films.

Before I delve into the films too much, I should note that I am a devout fan of Huppert (seen right with Schroeter), for the mere fact that she is one of the most talented actresses on the planet these days, and is willing to not only submerge her ego in a character, but is also willing to be disliked as a lead character in a film (something very few American stars will do, even the ones who have loads of acting skill). She also happens to be the performer who melts down the most immaculately on film — she has played a number of characters who have emotional or psychological breakdowns in her films, and always sketches a beautiful downward spiral as she descends….

Malina finds Isabelle playing two sides of the same woman, or twins. One interpretation I read online noted that Schroeter had vamped off of the novel that supplied the source material for the film, and in fact both Isabelles and the two male lead characters were different sides of the same female character. Whatever the case may be, the film is overwhelming and, yes, extremely operatic. It ends in spectacular fashion with the apartment of “the Woman” (Isabelle’s character name in the credits) in flames. She and her lover continue to communicate rather calmly as their surroundings are becoming a very attractive — and oddly not all that menacing — funeral pyre. I offer two short clips from the finale: 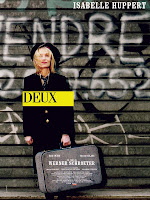 The later film Deux is even more of a phantasmagoria plot-wise (and I assure you, I pretty much never use that phrase to describe a non-psychedelic film). Huppert plays twins whose mother is Bulle Ogier, who may or may not have been killed by a serial killer called “The Flower Killer.” One Isabelle is impetuous, the other solemn, but Schroeter seems to have made the film to simply showcase the brilliance of Huppert (to whom he dedicated the picture — rare for a filmmaker to dedicate a picture to someone who is in it who is still alive!). 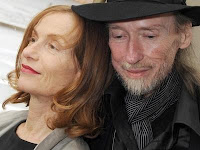 Schroeter seems to have let his imagination run wild and summons up images, situations, and characters for Huppert to inhabit. In the process, she plays her characters as two little girls, inhabits her mother’s identity, is lesbian, becomes a heroin addict and a drunk, sings opera, dances ballet, wears giant wings, dresses as a WWI-era soldier, is a murder victim, is a murderer, becomes a human puppet, and is seen both as a well-lit, made-up screen goddess and as a plain (but beautiful) middle-aged nobody.

It’s hard to encapsulate the film in a sentence, but if you can imagine a feature that would counterpoint Isabelle romantically dancing with her woman lover (who says in English, “fuck me, fuck me, darling…”) with her mother Bulle Ogier watching two young Frenchman doing a recreation of a Civil War battle, in the woods, at night (and then later watching one whip it out and pleasure himself), then you can sort of imagine the visually gorgeous madness that is Deux. Here is one of the film’s many operatically scored scenes:

Thanks to superior cineaste Paul Gallagher for unearthing these rare subbed copies of these strange and great films.
Posted by Media Funhouse at 3:32 PM