Woody Allen Boxes a Kangaroo on a TV variety show 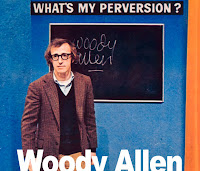 Yes, the title pretty much says it all. Woody hosted the TV show Hippodrome in 1966 (the show aired on CBS in the U.S. on July 19 and on ITV in the U.K. on October 13, 1966). His fancy footwork no doubt comes from a youth spent watching silent comedy. I thought some of the stunts he did on I’ve Got a Secret were goofy, but this one pretty much tops ’em all.

My thanks to friend Rich Brown, producer of AOL’s off-the-wall
“Asylum” video series for discovering this one. It’s not indexed under Woody’s name, so it ain’t exactly out there in the open (and the version that is indeed indexed under his name is a poor b&w copy).
Posted by Media Funhouse at 12:35 AM