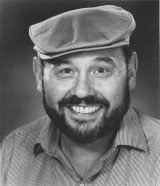 Ron Lundy was a NYC "metro area" institution, having worked for years at WABC-AM and later WCBS-FM; he died this week on Monday at the age of 75. I was an intermittent listener to the former as a kid, and a devout lister to the latter (before its playlist shrank, omitted the Fifties, and began to dote on the less-likeable cheez that is the Eighties). Thus, I pay tribute to this perennially cheery voice, heard to best extent in John Schlesinger's Midnight Cowboy. Joe Buck knows he's in New York when he hears Lundy's customary greeting, "Hello, love!" (or was that "luv" -- does it matter?). Here's a fan video saluting the film that starts off with this moment:

Lundy's voice comes in at the 3:42-minute mark to this wonderfully Seventies University of Iowa student film entitled "Statue of Liberation":

Posted by Media Funhouse at 6:05 PM