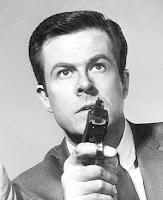 This week’s show-biz casualty, Robert Culp, was a great looking guy who, like Peter Graves, was a perfect TV personality. He had the good looks, the charisma, and did not melt into character parts all that well — he was always himself, and that is an advantage on a weekly TV series.

Of course, he’s best known for this work on I Spy and the far lesser but well-remembered The Greatest American Hero. From the beginning of his career to the end (he died this week at 79), he made more appearances on TV than in film, but he did make one really solid crime thriller as a film director, Hickey & Boggs (1972), costarring he and his old TV costar Bill Cosby. The film is not represented at all on YouTube, and I don’t have the time to digitize a piece of it (it used to run regularly on late night Ch. 7 here in NYC), but it is a surprisingly good crime pic.

So no Hickey and Boggs clips can be found on the Net, but you can view one of Culp’s more interesting TV movies in its entirety. Why? Because it was created by Gene Roddenberry, that’s why. And so, if you have the time I urge you to check out the pretty decent (and somewhat kinky — always knew the creator of the greenskinned dancing girl and the Girl with the Silver Bra was a little kinky) 1977 telefilm Spectre starring Culp, John Hurt, Gig Young, and Mrs. Roddenberry (Nurse Chapel to you), Majel Barrett:

And let us not forget the most notable theatrical film Culp starred in. He was the husband, and erstwhile “swapper” of the super-adorable Natalie Wood, in Paul Mazursky’s Bob & Carol & Ted & Alice (1969). Here is the extremely Sixties finale of the film, right after the couples figure out you can’t swing with someone you’re friends with (I don’t believe in “spoiler alerts” for films everybody should’ve seen already). It is the kind of conclusion that Hollywood producers would’ve only allowed at the turn of the Sixties:

Posted by Media Funhouse at 6:04 PM