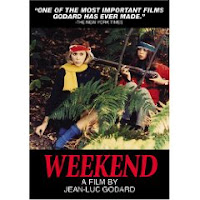 Arthouse film fans with long memories were depressed this week by the announcement of the closing of New Yorker Films, a firm that has been one of the key U.S. distributors of some of the greatest European filmmakers of the Sixties through the Eighties. I have very mixed feelings about this. Firstly, of course New Yorker owner Dan Talbot and company did an invaluable service to all of us in getting the work of these filmmakers (including Godard, Straub and Huillet, Fassbinder, Herzog) to the public when it counted. However, as VHS/DVD purveyors, New Yorker has not exactly been a fan-friendly label. It's not the lack of supplements on their discs — I can't fault a company for not having the dough (or the Criterion-like reputation) to acquire the rights to extras.

However, as a VHS label, New Yorker was the first company to introduce the dreaded MacroVision copyguard process that not only prevented copying of the tape, but also made the viewing experience pretty dreadful (the picture "breathed" if you had a lower-cost VCR). They also had a practice of putting out quite little of their back-catalogue on tape and DVD, concentrating primarily on their latest releases. I’d be surprised every time MOMA or another rep house would do festivals with extremely rare European films of a certain vintage, seeing a “New Yorker Films Presents” logo right before the “lost” picture began. The question “why the hell has this been kept on the shelf?” constantly came to mind — with individual titles, like Agnes Varda’s Les Creatures, as well as entire filmographies, like that of Jean-Marie Straub (two of his films have been released on disc by New Yorker, none on VHS, despite the fact the company had seemingly acquired almost all of his output).

As DVD became the medium of choice, I think that one of the central factors to New Yorker-distributed films “disappearing” was the issue of print condition. DVD is a format that has touted “perfection” since it first appeared, and as one looks back at some New Yorker VHS releases, it becomes apparent that, for a DVD release to have materialized, the company would have had to have acquired a pristine copy of the film from its country of origin, restored it if wasn’t already restored, and then re-subtitled it. Thus an essential title like Rivette’s Celine and Julie Go Boating (seen at right) just disappeared in the transition from medium to medium. The company would return to its back-catalogue sporadically (as with the latter-day releases of Herzog’s shorts, Godard’s Week-end and Straub’s Moses and Aaron), but mostly the label seemed to be staying away from the older titles, even as DVD was offering a new life for classic foreign films.

It also came to light when the Fassbinder films were eventually put out in pristine prints by other labels, that New Yorker’s video label had *re-framed* the films for their VHS releases to turn them from 1:33 "square" films to 1:66 "letterboxed" titles — presumably in an effort to make them look less than “television shows” and more like “art movies.”


But back to the efforts of Talbot and co. back in the Sixties, which are indeed worthy of gratitude from American cinema buffs (Talbot's purchases seemed like a "wish list" of items lauded by the great Susan Sontag in her essays and reviews). As for the theater that gave the company its name, I only went there when it was in its final years of existence (when this picture of it was presumably snapped), but it was a grand theater when it was around. The 88th and Broadway movie palace (below) is now best-remembered as the place where Woody introduces Marshall McLuhan to the know-it-all in Annie Hall. A list of some of the filmmakers whose works were distributed by New Yorker (besides those named above) would include Ozu, Bertolucci, Losey, Bresson, Rohmer, De Antonio, Pereira dos Santos, Tanner, Sembene, Rocha, Diegues, Oshima, Wenders, Schlondorff, Fellini, Wajda, Rossellini, Kieslowski, Pialat, Handke, Malle, Chabrol, Kurys, and Skolimowski. From the high-water marks set by these releases, we come to the point where stories circulated about the poor quality of New Yorker prints that were leased to local film festivals, and arguments over money required for the rentals of certain key films in a director’s oeuvre. They were not pretty stories, and not worthy of a company considered the “best friend” in America of these same filmmakers. 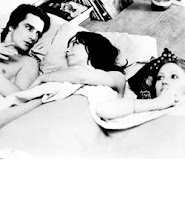 It will be interesting to see who acquires the company’s catalogue; it doesn’t say in this New York Times article about the company biting the dust. Perhaps we do stand a chance of finally seeing new prints of New Yorker’s key European films (like Jean Eustache's amazing The Mother and the Whore, right) on DVD — or whatever medium rules in the years to come.
Posted by Media Funhouse at 2:00 AM

For the first season of a film series I ran in the early 2000s, I booked CELINE AND JULIE. After giving it a rapturous introduction to the audience, I was embarrassed at the three hour pink nightmare that unspooled on the screen. It looked like the print had been struck in the 1970s when the movie first came out. Afterward I asked the booked to complain to New Yorker and ask for a refund. He laughed at me (gently, but still...) and explained to me the hard truths of the film rental business. No company that truly cared about cinema would have ever shipped out a print in that condition. I had one more experience with New Yorker, with a battered print of LANCELOT DU LOC, before vowing never to deal with them again.

Thanks, Ed, for putting out there some much-needed perspective on the demise of New Yorker.

I can tell you that at least one of the filmmakers by whom New Yorker came to be associated as "the filmmaker's friend" — and that would be Jean-Marie Straub — was absolutely and ever furious about the conditions of the prints of his and Danièle's films as possessed by NY'er. (Then again, I wonder about the condition of any of the prints circulating of the older S/H films even in Europe...)