A quick DA salute — I know, I know, I missed a bunch of 2012 departures, I hope to catch up soon — to the great Dave Brubeck, who died this week at 92. I was lucky enough to see Mr. Brubeck at Carnegie Hall back in 2003 (free tix from a friend, the only way for me to score great seats at that venue since Harry Chapin left us), and it was a terrific concert, with a master pianist plyin’ his trade at the tender age of 83.

The obits ran through the details of his landmark life — son of a cattle rancher, he ditched working with cows to play the piano; formed an integrated quartet that played college campuses throughout the Fifties (if the deans found out they had a black member and told them the main stage wasn’t open to them, they’d play the cafeteria instead); upon the quartet breaking up in ’67, he devoted himself to writing concertos, oratorios, ballets, and cantatas. 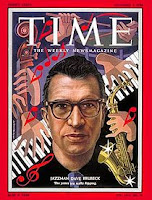 But what was this oh-so-calm-and-dedicated musician best known for? Creating two of the melodies that we have come to know as “signifying” the cooler side of the Fifties in films and TV episodes. They both were featured on the 1959 million-selling album (first jazz LP to do so; by now it’s sold two million) Time Out, and you KNOW them even if you can’t name ‘em.

The first one, the perfect “Take Five,” was a hit single that reached #25 on the pop chart. The notion of a jazz instrumental hit (that was not a movie theme) in the post-big band era was a rarity indeed, but “Take Five” is just so infectious that it actually made jukeboxes around the country. It now is THE go-to song for movies and TV eps that want to convey the hipper side of the Fifties (even though it was released just as the decade was ending).

Here is the Dave Brubeck Quartet performing the song on German TV in 1966. On the sax is Paul Desmond, who wrote the song and willed the royalties from it to the American Red Cross (who reportedly receive $100,000 a year in “Take Five” money).

The other, super-evocative piece that has been used in several films depicting the "beatnik era" is “Blue Rondo a la Turk,” the opening track from the same album. Here the Quartet perform the track on a TV show called The Lively Ones on July 25, 1962:


“Blue Rondo…” has been used in a LOT of film and TV shows trying to evoke the Fifties, my personal favorite being Paul Mazursky’s charming  Next Stop, Greenwich Village. Mazursky clearly felt the tune was emblematic of an era, so he shifted it chronologically — Next Stop takes place in 1953, but the Time Out LP didn’t materialize until ’59.

As a bonus, here’s a song that doesn’t show up on movie and TV soundtracks, but is equally ear-worm-ish and was “visualized” via dance on an unidentified Sixties variety show. Here, kats and kitties, is the “Unsquare Dance”:

Posted by Media Funhouse at 6:05 PM