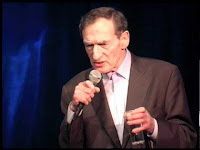 I've been proselytizing about British alternative comedy on this blog and the Funhouse TV show for about three years at this point, and one of my favorite things about following it is “connecting the dots” and discovering even more brilliant standups whom I'd never heard of, but whose material puts the alterna-souls over here in the shade. The only problem with following this stuff “from a distance” is that it's highly unlikely these gents and ladies will make it over here. This last factor is counteracted, though, by the fact that the work of these comics can be usually be seen in profusion on YouTube and obtained on DVDs from the UK.


Such is the case with Arnold Brown, a “godfather” of British alternative comedy. I first heard about him when he was cited as an influence by Richard Herring and Stewart Lee in interviews. It's quite obvious why the former Fist of Fun partners looks up to him: Brown is a quiet, soft-spoken standup who regularly turns his jokes on their side, sometimes deconstructing and toying with them as he's telling them. His sarcastic edge is wonderfully lethal, and is enriched by his Scottish burr.
A little bit of history: Brown began his standup career in the late Seventies at the Comedy Store in London while still working as an accountant. He became a regular performer at the legendary Comic Strip club after it opened in 1980. There he performed alongside the club's other mainstays, which included The Young Ones set and French and Saunders.
Brown appears in the 1981 short film by Julien Temple called “The Comic Strip.” He is seen onstage doing his act from 1:25-4:15 in this section of the film:
His laidback stage presence counterpoints the weirdness of some of his remarks (“I come from Glasgow... why not?”). He was the exact opposite of the spirited (and superb) Alexei Sayle and the broadly comic Mayall and Edmondson. Through the alternative “cred” he built up doing his act at the Comic Strip, he eventually wound up opening for bands across the UK, something he discusses in one of the extras on his new DVD – more on that below. 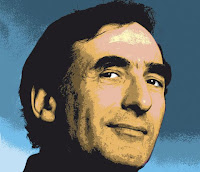 From the Eighties to the present day, Brown has kept busy as a standup, an actor in both film and television, and a commercial voiceover artist. He could be seen by American viewers playing a psychiatrist in Bill Forsyth's Comfort and Joy (1984), and he also played different small roles during the run of The Young Ones.
Funhouse TV viewers will have seen him guest-starring as Stew's veteran granddad in clips I showed from the “Crisps” episode of Stewart Lee's Comedy Vehicle. He also shows up in an episode of the caustic comedian/magician Jerry Sadowitz's The Pall Bearer's Revue (1992) – although you'll find no clips from that online, as the brilliant and very explosive Sadowitz (another colleague of Brown’s who’s his polar opposite) is adamant about not allowing any performance footage of himself online (he makes the reclusive Daniel Kitson seem like Russell Brand).
Here is another vintage clip of a younger (read: middle-aged) Brown performing his unique material on an unidentified variety show:
As the years have passed, Brown’s delivery has gotten even more refined and laidback. Like a confident magician (should we raise the name of Sadowitz again?), he often peels back the layers of his jokes, as he does here in one of my favorite bits of his:
A short clip with Arnold offering his wry take on quotidian comedy (“pretended empathy with audience…”):
Brown can finally be experienced in the U.S., thanks to the folks at Go Faster Stripe, the Welsh mail-order DVD company that has done a terrific job of preserving the acts of both younger and older UK alternative comics, and making them available at a low price in supplement-laden releases. Befitting his act, Brown’s disc Jokes I Have Known, peels back the layers of his act, as he is seen alternately onstage and in a living room home alone, seated, performing straight to the camera.

At first, I thought the effect of intercutting the two different spaces was jarring, as if a DVD extra has crept into the main program. As the disc goes on, however, you realize that Brown is proud of his material and wants to communicate directly with the home viewer. As Stewart Lee has done in his Comedy Vehicle, Brown is acknowledging the big difference between performing for a nightclub audience and trying to entertain the TV viewer.
But all the above is theoretical, and this is comedy (which, as Steve Allen noted, can never make a person laugh once they’ve analyzed it). Brown has worked as a writer for other comedians, and that comes through in Jokes I Have Known: he has his own distinctly mellow-yet-sarcastic delivery, but the jokes themselves do not depend on his persona, they’re just funny. 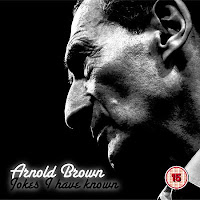 He also doesn’t shrink from making his age a subject for laughs — at one point he stops, walks to the rear of the stage, and consults a legal pad to see if he’s left out any routines he wanted to do. He then remarks that the home viewer will never see him do that, it will be cut (but of course it wasn’t, intentionally).
At one point, he casually slides in as a side-note to bolster a joke the fact that he is 76 years old — with most entertainers (nearly all?), that would be a sad attempt to garner applause, but Brown uses it instead to shore up his slow-moving-but-fast-thinking comic persona.
As is always the case with Go Faster Stripe releases, the disc includes interesting extras, the main one being a very funny mutual interview that Brown carried on with fellow “mellow older gent” comic Norman Lovett (their GFS DVDs were shot back to back).

In the interest of *full disclosure* (and with great pride), I will note that, yes, the other extra is a “Consumer Guide” episode of the Funhouse TV show in which I reviewed three terrific GFS releases (Simon Munnery’s Hello, Nine Lessons and Carols for a Godless Xmas, and Stewart Lee’s 90s Comedian).
Two samples of the Arnold Brown DVD are available on YT. The first one shows the counterpoint between Arnold doing jokes onstage and at home (btw, fellow Yanks: “Strepsils” is a British lozenge):
And possibly the SINGLE BEST example of Brown’s wonderful deadpan to be found online, his piece on the potential desirability of sheep:
Posted by Media Funhouse at 2:35 PM