In Pod We Trust: five podcasts to which I am addicted (entries 4 & 5)

4. As It Occurs to Me: Richard Herring remains one of Britain’s busiest standups and also one of its most prolific podcasters. In my profile post on Herring, I discussed his other endeavors, but in this “short list” of recommended podcasts I had to include his sketch comedy show As It Occurs to Me, since it is, by turns, the most ambitious, the silliest, and, yes, the most imaginatively vulgar program I’ve heard in the decades since one could actually hear “the seven dirty words” on listener-sponsored Pacifica radio in NYC.

The show grew out of Herring’s twisted-history BBC program That Was Then, This Is Now, but it is a vast improvement on that show, in that AIOTM (as its title indicates) has no hard-and-fast concept behind it and is subject to no censorship whatsoever. It’s an exploration of the ideas and events that have occurred to Herring (and his cast) in the week prior to the program. 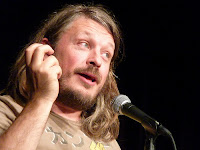 One warning: it might be quite puzzling to listen to the later episodes in any given series of the show before the earlier ones, so it might be best to start with the earliest shows. Herring is a master at crafting utterly absurd in-jokes and taglines that range from the sublime (I still salute him for referring to people’s children as their “sexcrement”) to the ridiculous (one season later, AIOTM still contains gag references to a skit that fell very flat a year ago, a goofy motorcycle-clothing store sketch).

Herring is ably abetted by his small cast of two actors (Emma Kennedy, Dan Tetsell) and a musician (Christian Reilly), but the show does seem to rise and fall on the twists and turns of his own fertile and warped imagination, and his ability to toss off lines and concepts that are better than some lesser standups’ entire acts. He also does this on the much more informal and quite often directionless podcast he does with TV/film critic Andrew Collins called Collings and Herrin.

As for the “dirty” side of the show: I have a pretty low tolerance for comedy that is obscene for the sheer sake of being obscene, but I do revere “dirty” humor that is surreal (as with Frank Zappa) or fucking brilliant (as with Cook and Moore’s inspired “Derek and Clive” LPs). Herring regularly plays with the notion of being puerile in his humor, but somehow keeps AIOTM and his standup from ever descending to the Howard Stern/Opie & Anthony level of unimaginative scatological humor.

Herring’s stage persona in his standup is often that of a chubby schlemiel, but in his podcasts and in certain of his themed standup shows, he is an agent provocateur who takes things just one step too far — and then muses about why he’s never on “the telly” anymore….

UPDATE: The only trouble with trying to chronicle any part of Richard Herring’s career is that the guy moves so damned fast. In the time that it took me to write and upload this blog entry, I found that he had recorded what he claims is definitely the very last AIOTM episode. He said that twice before, so perhaps we will see a return of the show, but he already has another short-term podcast he’s developing for this year’s Edinburgh Fringe, and he continues the sometimes hysterical, sometimes not-so-much, Collings and Herrin ’cast.

5.) Atoms, Motion and the Void: The preceding five podcasts in this survey are all rather easy to discuss, but the last one is such a special case that I’ll first refer you to a piece I wrote on it back in 2008, then I’ll describe it again briefly and talk about its latest “cycle” of programs.

AMV offers superlative storytelling in a literary vein — wait, stop, don’t mentally tune out! By “literary,” I mean entertaining and exceptionally well-constructed, not dry and over-intellectualized. The podcast is the creation of writer-performer Sean Hurley, who plays the lead character, one Sherwin Sleeves. Sleeves is an unflappable old gent living in the woods of New Hampshire who inhabits a universe that is by turns extremely realistic and magical. 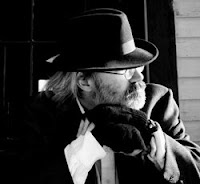 The show is in fact a unique fusion of disparate elements, the main one being modern lit and old-time radio. The clever plot twists and self-awareness of the former mingle with cliffhangers and subtle “reveals” of the latter in the best AMV episodes. The stories are so well-written that I frequently scratch my head and wonder why Hurley hasn’t had a short-story collection or novel published yet. Besides the fact that the publishing world is bleeding to death on a gurney in the corner of the emergency ward, I think it is because Sean has unwittingly staked out his own terrain, and his work needs to be performed more than it needs to be read.

Making AMV even more a “one-man band” effort is the fact that Sean scores the show himself. In the earliest episodes, he played songs by other artists that perfectly fit the mood of the piece — in this capacity he actually got me to enjoy Rammstein and perfectly accomplished a Funhouse-like leap of culture with an episode that featured songs by both the Velvet Underground and Eddie Cantor. In recent years the songs in the shows have all been Sean’s own, thus fully integrating Sleeves as the sole “voice” of the universe he inhabits. 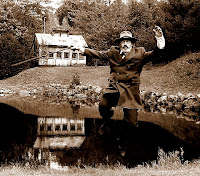 After a layoff of several months, Hurley has returned with a new series of episodes that he is offering by subscription — the original 35 shows are all still available for free. So far the new tale is engrossing and properly trippy, as Sherwin moves through a landscape of woods and water that is the mirror image of the one he normally lives in. Again, AMV functions with the homespun charm of A Prairie Home Companion, but as if written by a writing staff composed of Borges, Hesse, and Vonnegut (and perhaps, for good measure, my all-time fave Richard Brautigan).

No one is going to subscribe to something they’re not familiar with, so I hereby reproduce from my last blog post the list of episodes that supply the best introduction to the show.

The fact that there are well over two dozen episodes [now there are 35 – ED] may seem daunting to newcomers, but I suggest these shows: episode 2 as an amusing intro to the character and his ramblings, episodes 4 or 6 as door-openers to the larger tapestry that Sleeves winds up telling; 5 or 7 for uniquely touching tales (and I am not into the sloppy sentiment that ordinarily surrounds the telling of stories involving kids), and episode 18 if you just want to jump the gun, and experience Hurley’s mindwarpingly good writing.

AMV was the first podcast I got hooked on, and it remains a personal object of addiction.

Available: Here
Price: The older episodes are all free online. The new cycle of shows is available in the form of a subscription, with the episodes coming in the mail as limited-edition CDs, plus membership to the “Stalwarts” site, which celebrates all things AMV and features related downloads. Subscriptions are $12.96 a month, three months for $38.88, or six months for $77.76. I chose the download-only option (with Stalwarts membership), which is $45.00 for the series of six eps as MP3s.
Frequency of podcast: the show appears at intervals and has always been well worth the wait between eps.

I’m glad to share my recommendations for the preceding quintet; please feel free to add your own nominations in the comments field below. The five shows I included in this post are all very different, but they all share two things: they relate to audio genres that were formerly a staple of commercial radio (no more!), and it’s evident that their host-producers all put in a helluva lot of hard work to create them. I close out with two instructions: download and listen!
Posted by Media Funhouse at 6:11 PM

Labels: "As It Occurs to Me", Podcasts, Richard Herring, Sean Hurley, Sherwin Sleeves