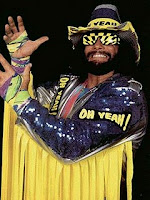 I haven’t talked much on this blog about my love for professional wrestling, which started when I was a kid and has been revived throughout the years whenever a master mic-worker has appeared. See, I’m not as interested in the matches as I am in the promos and in-between business when it’s amusing — which it only is when it’s in the hands of seasoned ranters or crazy people (and of course the best wrestling stars are both). “Macho Man” Randy Savage died a few weeks back, and I need to pay tribute to him because he was a mighty mic-worker, a guy whose promos at worst were vaguely coherent; at best they were, well… brilliantly, superbly insane.

There was a special on cable-access here in Manhattan years ago called “Professional Wrestling: The Spoken Word,” which simply intercut thirty minutes of the craziest interview segments from the more obscure federations (obscure to those of us up here in the North). Now that YouTube exists, you can readily find hours of this stuff, and when you watch it in sequence, you find that, yes, these guys are manic spoken-word artists, standup comedians, and even in some cases (the mute George “the Animal” Steeles and Bugsy McGraws), performance artists. 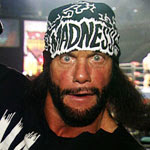 So we salute Randy Poffo, aka Randy Savage, who could wield a mic with the best of them (that’s why he became a cartoon voice-talent after his wrestling career was over). He came from a wrestling family (his father Angelo was in the business, as was his brother — "Leaping Lanny Poffo") and had a career as a minor-league baseball player before making his in-ring debut in 1973. Throughout the three decades he worked as a wrestler he was both a successful “heel” and a “face” — although he was FAR more interesting as a heel, it goes without saying.

Savage was diminished in WWE history since he left the franchise in 1994. Vince McMahon held a grudge over something — fans speculate on the Net over rumors that “Randy took Stephanie McMahon’s virginity” to “Randy gave Shane McMahon cocaine” to “he took Slim Jim's sponsorship with him when he went to WCW” to “there was a business deal that went sour between Randy and Vince.” Whatever the case was, McMahon has praised Savage since his death (including a few-paragraph statement in Time magazine), but was completely against him when he was around.

Sure, Savage had massive personal problems — he used drugs, was rumored to be extremely difficult, and sometimes the plot strands of his “storyline” (with women entering and exiting, and him punching out guys for lusting after them) mirrored what was going on in his real life. But I think the entertainment the guy afforded us playing a human cartoon (that he himself created, then lost control of, and then brought back to life as “the Madness” in WCW) compensates for whatever personal gripes people had against him. I offer in evidence the clips below.

The best way to start a very select survey of clips is to offer a solo Randy ramble, in which he notes that “history beckons the Macho Man!!!”:

Diehard fans have deep VHS collections. Here Randy is in 1980 in a fed called ICW that his father had a hand in founding. The joy of watching clips from the smaller feds is seeing how the mic-workers fill time (they sometimes had to fill large clumps of it in the clean-up between matches). The seeds of greatness lie in this insane rambling (the best bit: staring all night at a candle):

Randy’s brother Lanny was the poem-spouting wrestler “Leaping” Lanny Poffo. The two brothers made a music video set to an AC/DC song, but this beefcake-riddled, homoerotic item with the two set to “State of Shock” by the Jacksons and Mick Jagger is quite wonderfully nuts:

Looming large in Savage’s legend was his manager (and real-life wife) the “lovely Miss Elizabeth.” I never found her the least bit compelling in the ring or as a mic presence, but he had her in-ring with him for over a decade. Here he proposes to her, and here is her WWF debut, with the announcers trying to make her seem more glamorous than she was:

Randy informing us that he’s insane:

Sometimes you got double or triple the terrific mic-work. Here Savage is joined by the equally insane Ultimate Warrior, and here he is with Zeus (action movie perennial Tiny Lister) and “Sensational Sherri” Martel:

The King and Queen of Madness, Randy with his new manager Sensational Sherri, command the camera. Martel was everything Miss Elizabeth was not (a compelling presence on screen, an in-ring wrestler, a great villain):

And cross-promotion is important, so of course there had to be a cheeseball rap video for Randy (he did a later, mega-raspy-voiced rap album that is quite special). Here it is, with background singers praising what sounds like the "Matcho Man" (what do they care?):

Before I conclude with the best-ever period of Randy’s mic-work, let me flash forward to him doing a promo this year for Comic Con (and Macho Man action figures), looking much older (he died at 58), but still possessing a great raspy voice and capable of rambling ("that’s a secret, no it isn't…”) like nobody’s business:

I must close on Savage’s promos cut with the great “Mean” Gene Okerlund, a Howard Cosell-sounding announcer who was arguably the best straight man for wrestlers in the WWF. Take a look at Randy being interviewed by Jesse “the Body” Ventura, and then check out the condensed power of Savage cutting promos with Mean Gene:

My two favorite-ever Macho Man moments. First, he gives his hated opponent Ricky “the Dragon” Steamboat a small respite with “a cup of coffee in the big time” (awesome):

And what must be one of the most kinetic, crazy-ass interviews he ever gave to, of course, Mean Gene:

Posted by Media Funhouse at 9:08 AM