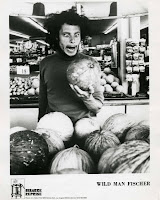 Larry “Wild Man” Fischer was a true original for whom the unwieldy and imprecise term “outsider music” is just too tiny in its implications. And let’s be honest: the “outsider” label is a term that cares less about the artist and more about the "expert" — thus the inclusion of insiders with major-label music careers in the “outsider” category.

Fischer was the real deal, though: a street singer who had an awful singing voice but who thought up and performed songs that were bizarre, oddly (sometimes scarily) honest, and, most important of all, catchy as hell. He was also was lucky enough to be “rediscovered” over the years by different groups of odd-music fans. 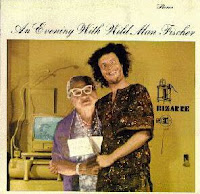 His obits sketched his tenure as (The New York Times) “a mentally ill street musician” and (The L.A. Times, being far more kind) “a disheveled troubadour.” His mental troubles were of course what made his music so compelling (or really irritating) to listen to. He was given the nickname “Wild Man” by Solomon Burke, but is best known for his short association with Frank Zappa, who produced the amazing two-record set An Evening with Wild Man Fischer. Fischer’s highs and lows were recounted in the documentary Derailroaded, where the reason for the break with Zappa is revealed — Larry throwing a bottle in anger, nearly hitting baby Moon Unit in the head.

After the Zappa connection had died out and everyone forgot his sole appearance on Laugh-In (presumably booked in order to find “another Tiny Tim”), Larry went back to roaming the streets of L.A. singing for dimes and quarters. His recording of a promotional song for the Rhino Records store provided him with a “second act,” as he became a favorite on The Dr. Demento Show with “My Name is Larry” and went on to release three LPs for the newly created Rhino label. Those albums didn’t sell very well, and he went back to being a street singer. He was reclaimed from obscurity by the “outsider” business, and then made a final appearance in public on The Jimmy Kimmel Show, thanks to a very smart producer on the show being a fan of his work.

Derailroaded is essential viewing for those who know Fischer’s songs and others who just like strange music. It is thorough and very moving, but sadly left out the Kimmel appearance and thus ends on a down note, with Larry entering an assisted-living facility, in which he lived until his death two weeks ago of heart failure at the age of 66. Unlike the Roky Erickson and Daniel Johnston documentaries, Derailroaded leaves us with the sad notion that the thing that made Larry special, the “pep” that he claimed was his impetus to write and sing songs on the street, was gone when he went back on medication for bipolar disorder and schizophrenia.

Let’s remember the Wild Man at his creative, utterly bizarre best, first with the song he was hoping would be a hit single, for which Zappa provided a full production:

His most anthemic song, which you WILL NOT be able to get out of your head, is the one he performed on Laugh-In, “Merry-Go-Round.” Here is the album version, with Larry lapsing into a British accent on one of the verses — again, he wrote this hoping for a hit single, but instead crafted a tune that is all hook and nothing more, which seems to be the product of both his obviously voracious AM-radio listening and his childlike ear for sound:

As an example of Fischer’s influence on later generations, I offer Alexei Sayle’s cover of “Merry-Go-Round,” which seems just a bit more menacing than Fischer’s version:

A true rarity: Wild Man performing with the Mothers of Invention in late ’68. Here he performs “I’m a Meany,” his song about Yellow Submarine:

Even stranger, one of the creepier and more revealing songs from the Zappa-produced double abum, “The Wild Man Fischer Story,” performed live with the Mothers at the same show:

The song that ushered in the second phase of “Wildmania,” his promotional 45 for the Rhino store, “Go to Rhino Records”:

An invaluable little intro to Larry on the street, courtesy of an early Eighties “news magazine” show:

A rare concert appearance by Wild Man, with one of my fave bizarro musical acts, Barnes and Barnes:

Fischer recorded a duet with Rosemary Clooney (yes, you read that right) called “It’s a Hard Business.” That isn’t on YT, but you can hear similar sentiments in the sad and cynical “Don’t Be A Singer”:

The trailer for Derailroaded offers a capsule view of his life:

And the film’s creepiest scene offers animation for what is surely Larry’s scariest tune, “The Bouillabaisse”:

Larry’s last public performance, to my knowledge, his stint on the “Future Talent Showcase” on the Kimmel show:

Why not end with a sigh? Wild Man, with the help of Mark Mothersbaugh, covers “The Way We Were”: