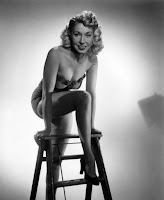 Back in the days before reality shows ensured that everyone had a chance to prolong their show-business careers indefinitely, there were few “second acts” in entertainment. One of the actresses who successfully escaped the B-movie “underground” and scored a second career was Dolores Fuller, who died a few weeks back at 88. She was best known for her work in front of the camera, as the female lead in her then-boyfriend Ed Wood’s astounding Glen or Glenda? (1953), but she refashioned herself in the Sixties as a songwriter, contributing a dozen songs to Elvis movies.

I interviewed Ms. Fuller back in the mid-Nineties, and she was quite a sweet lady who was more than willing to talk about the highs and lows in her life. By that point, she was again working in front of the camera — she appeared in micro-budgeted genre pics like The Ironbound Vampire and The Corpse Grinders 2, directed by the only surviving no-budget auteur, the redoubtable (and unstoppable) Ted V. Mikels.

She began her career with a bit as a child extra in It Happened One Night (1934), and then returned to Hollywod in the early Fifties, appearing in uncredited roles in a few films before meeting and becoming the girlfriend of the legendary Edward D. Wood Jr. — who, as we all know, is not the “world’s worst director” he was labeled as, because his films are compulsively watchable, no matter how incompetent they got (his scripts were astounding too, especially in the later years). 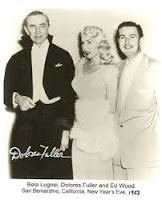 Ms. Fuller did the convention circuit in the mid-Nineties, thanks to the resurgence of interest in Wood, which culminated in the extremely upbeat and touching Tim Burton biopic. In that film she was played by Sarah Jessica Parker, who publicly said (I believe it was on The Tonight Show) that it was hard to play Dolores because she was such a bad actress (SJP is capable of so much more as a performer — insert joke *here*). Glen or Glenda? does remain one of the most stunningly bizarre movies ever; just on the off chance you haven’t seen it (or want to be reminded of its angora genius), here is the famous finale, in which Dolores gives her sweater to Ed to complete his transformation:

Ms. Fuller was unabashed about all aspects of her B-movie career — when I met her for the interview, I was surprised to find that she was selling color nude sunbathing pics of herself from the Fifties, which she said were shot by none other than “Eddie” himself. She noted publicly that her relationship with Wood ended when he became a heavy drinker, but one has to assume it was also a function of her embarrassment over his transvestism (see the interview clip below).

As to her “rebirth” as a songwriter, the story goes that she asked her friend Hal Wallis for a part in the Elvis picture Blue Hawaii (1961) and didn’t get one. Instead, she got to write the lyrics for a song Elvis sang in the pic, the extremely Presleyian (check out that classic finale) “Rock-a-hula, Baby”:

With her partner Ben Weisman (he wrote the melodies, she wrote the lyrics), Dolores went on to write a total of twelve songs for the Elvis movies. She also wrote tunes that were recorded by Nat King Cole, Shelley Fabares, and Peggy Lee. In addition, she started a record company named Dee Dee Records that launched the career of Johnny Rivers, and she is credited with getting Tanya Tucker her first break in the music industry.

Since I think she was prouder of her musical accomplishments than for having been Ed Wood’s angora-object-of-desire, I’ll include a few of her Elvis tunes here. First, a jumpin’ little tune, “I Got Lucky”:

Then “Steppin’ Out of Line.” At first I thought this fan-created bit of video (using a lot of anime images) was silly, but then I realized it’s sort of a welcome break from Elvis’ cookie-cutter movie musical numbers (which, aside from Viva Las Vegas, were rarely staged creatively):

Perhaps the silliest song Ms. Fuller co-wrote for the King, “Do the Clam” from Girl Happy (1965). The “Bo Diddley beat” is used to support this dance tune. And yes, Elvis does do the dance at the clip’s end. It is entertaining and ridiculous:

Ms. Fuller had a song in Elvis’ very last film as an actor, the stunningly campy A Change of Habit (1969), which I heartily recommend to everyone reading these words (it is up on YouTube in its entirety at this moment, and certainly can be discovered on DVD). Mary Tyler Moore is a nun, Elvis is a ghetto doctor, and they both try to cheer up an unhappy little girl in this scene. The film’s sub-theme is whether MTM will leave the nunnery for Elvis — at this point her gleeful single-shots are a little too weirdly orgasmic (especially in front of a kid on a merry-go-round). The song is pretty wacky too:

Since I’ve linked to the silliest, let me link to the best tune Fuller co-wrote for Elvis, this rewrite of the old North Carolina folk tune discovered by John Lomax called “Cindy.” The original is sung by Ricky Nelson in Rio Bravo. The revamped version by Fuller, Weisman, and Fred Wise is reputed by Wikipedia to be the one covered by numerous artists (including Warren Zevon) in the last four decades. Then again, a nimble YT editor has matched up the Ricky Nelson version with the great duet by Johnny Cash and Nick Cave, and it appears they were singing the traditional version. In any case, Elvis' version does indeed rock, and belongs to the "comeback" period where he seemed to actually give a damn about his music again:

I have the feeling that while she was steadily working as a lyricist, she rarely thought about her ex-boyfriend Ed Wood (who was then writing, and occasionally appearing in, softcore pictures) and never dreamt that his movies would enter the mainstream decades later (does anyone remember that Warren Beatty’s name was somehow linked with the arthouse canonization of Glen or Glenda? back in the early Eighties?). 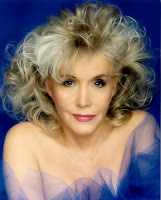 Whatever the case was, she was charming and gracious when I interviewed her at the Chiller Theatre convention in the mid-Nineties. I’ve always particularly liked her looking away in a dramatic fashion as I ask the question here. Like many of the older ladies I’ve interviewed, she was a class act.

Posted by Media Funhouse at 5:04 PM