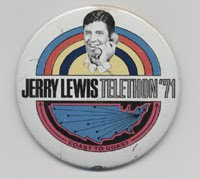 I don’t know if younger viewers are drawn in by any part of the Jerry Lewis telethon, but I do know that older viewers flip it on, if only to say, “Wow, she looks like that now?" "He’s gotten old!" "Oh jeez, I forgot about him….” These days, the producers of the program include little nuggets of the show’s past glories — best-loved moments with the likes of Jack Benny, Totie Fields, and Sammy Davis Jr.; the zaniest bits of Jerry freaking out; and some spontaneous moments that do qualify as pop-culture landmarks (as when Sinatra brought out Dean Martin, or John and Yoko came on to ask folks to contribute to MDA — more on this below).

In any case, the show is back on the air this Sunday, and I for one am very glad that we in NYC have Tony Orlando as a host. Tony is a high-energy MC who keeps the show moving right along. He gets the pitches done, and also provides some great musical fun with folk from his favorite era, the “Brill Building” period of the pre-Beatles Sixties. But Tony always points to Jerry as the guiding light behind the whole enterprise, and there’s no disputing that. Thus I offer a little survey of the most unusual telethon-related clips on YouTube.

Jerry does a generic pitch for the show, including a list of made-up guest-star names:

Ad campaigns promoting the MDA’s fund drive. The “let me keep the change” jingle is something I hadn’t heard since these spots aired, but the second it began, I knew all the freakin’ words (ah, the machinations of a TV-besotted mind):

I don’t know where the poster found this clip, but it’s old-time movie star and Mommie Dearest herself Joan Crawford on the telethon in the late Sixties:

Two short clips of Lennon on the telethon, appearing live in the NYC studio. First, a bit of “Imagine”:

And then “Give Peace a Chance”:

The Jackson 5 in their adolescent incarnation, doing “Dancin’ Machine”:

Jeezis kee-rist, what the hell was Manakin? Well, whatever it was, it was on the telethon:

A late Eighties appearance by Sammy, in which he presents Jerry with solid gold golf clubs. This might have been considered bizarre excess since it occurred on a fund-raising event for a charity. But, hey, Sammy did everything big:

The memorial tribute for Sammy that appeared the year he died:

Everything goes wrong in this bizarrely disorganized bit from the 1984 telethon:

Jerry bashes the guests who send taped pleas for MDA and don’t guest live on the show:

Jerry mocks the Spanish language (he used to do this for most languages, but this is the only clip of that sort I could find online):

Perhaps the weirdest clip in this entire survey. Jerry announces that he will take donations to the MDA from anyone, including drug dealers. In fact, he solicits drug dealers to send in dough:

To close off, a trio of extremely rare, non-telethon-related clips. First, Jerry live in Paris in 1971:

On Mike Douglas yet again, this time joining a trio of young men who hum. Aural mayhem ensues.

And finally, there’s no better way to end than the Saturday morning cartoon Will the Real Jerry Lewis Please Sit Down?, which seems to have been a clip job on The Family Jewels. I can definitely discern Howard Morris’s voice as the German professor, but am not sure who did the other characters:

Posted by Media Funhouse at 1:29 AM

The voice of Jerry Lewis in the Scheimer-Prescott cartoon was supplied by "Squiggy" David L. Lander.