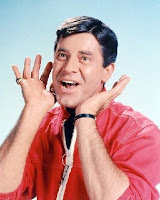 Every year around this time I celebrate in the Funhouse the advent of the Jerry Lewis telethon, which is an institution that belongs to television’s past — the world of the variety show, the “all-star spectacular” specials, and the personality TV series that would allow a performer like Jackie Gleason (Jerry’s TV variety fave) to do whatever he wanted with his timeslot.

The telethon remains an acquired taste that is either must-monitor TV (a scant few can actually move through the whole thing) or is to be avoided completely. The phenomenon of Jerry getting more and more caustic as time moves on has diminished somewhat, but there are still golden moments to be reveled in (more of that in a later post). Jerry of course still has fans in many European countries, and one of his German fans has decided to share some of his rarities on YT, and so I must share them too. First, a German variety show appearance where Jerry performs a chess skit that reminded me heavily of Ernie Kovacs’ “Eugene” special.

Jerry was never able to have a successful variety series, unlike his ex-partner. One of the most notorious attempts to cram his overwhelming personality into the variety show format was a live Saturday night prime-time series that was retooled after a few episodes into a talk show, and then was cancelled by the network. Here is a full episode of that show, which is full-tilt Jerry that will alienate anyone but his most ardent followers:

Jerry cohosted a week of Mike Douglas’ daytime talk show in 1978. Ziefer has put up four segments from this week. The first one has Jerry telling a story about a nun, and showing a recreation of the Errand Boy “Chairman of the Board” bit:

On the second day, Jerry discusses what he claims was his initial idea for the Martin and Lewis comedy team (a notion called “sex and slapstick” involving Red Buttons and Jack Carter that I’ve never heard him discuss anywhere else). Also, a pretty wonderful paranoid bit about why rumors were then circulating about him skimming off money from the MDA — it only started happening “after Watergate.” Make of this what ya will:

One of the great artifacts of Jerry’s Eighties work is a VHS called Jerry Lewis Live in Las Vegas. He sings, dances, tells one-liners does his baton “trick,” makes the audience sing “Shine on Harvest Moon,” and threatens to piss on a woman at ringside:

In the early Eighties, Jerry made two movies in France that were never, ever shown over here. Ziefer has posted both, the first one dubbed in German. It is called The Defective Detective (yes, an English title on screen) in this version:

The second one thankfully has English subs. It is called Par Ou T’es Rentres, On T’a Pas Vu Sortir? (How Did You Get In? We Didn’t See You Leave), and is très, très wacky:

On the rarities front, Ziefer’s greatest contribution are all the segments from German TV. Here Jerry is interviewed to celebrate his birthday. This is the somber Jer:

The dialogue-less silent comedian Jer is seen here in a skit about a cruise ship:

And finally, Jerry speaking German (sorta) with the help of cue cards. Here he plays a number of characters with the support of the German variety show’s very dapper host: