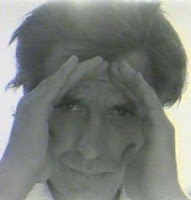 … and he never even saw “reality TV”! I was completely blown away in March of 2008 by the discovery of a Dick Cavett Show episode featuring John Cassavetes, Ben Gazzara, and Peter Falk promoting Husbands (now sadly removed from YT), so I was very happy this week to catch the extremely rare bit of a Cassavetes interview seen below. Presumably intended to air on TV (on a local news or entertainment show?), John is in rare form as he sits with Gena Rowlands and Ben Gazzara in a restaurant to promote his film Opening Night (1978).

It’s great to see him here, confident that he has made a great film and clamoring to trash mainstream moviemaking and TV. What’s interesting to consider, though, is that he has total faith in Opening Night at this point, and then he proceeded to hide it from public view for years. Of the eight masterful “personal” films he made he owned five outright (all of which have now been made available). Those five were effectively out of circulation in America for several years before Cassavetes’ death, since the only way to get ahold of them was to contact his neighbor (this is documented in one of the many books on JC by Ray Carney) or to borrow/view the library copies owned by MOMA (which Cassavetes had donated).

It’s never been fully explained why the films remained out of distribution and were so hard to obtain in the U.S., but were readily accessible (at least to rep theaters and museums) in Europe. One can only assume that the passionate, perfectionist Cassavetes had some misgivings about the pictures; he had in fact retooled each of them, and variant versions with different running times existed for four of the five titles.

The issue of whether Cassavetes would’ve wanted people to see the variant versions has been answered by Rowlands and other representatives of the family — they say that only the “finished” versions should be seen (but in fact, there were actually two finished versions of Killing of a Chinese Bookie both edited by the man, and thus those are out on Criterion together). Strangely, though, he donated a print of the original version of Shadows to a college library, and, although he edited Faces down to 130 minutes, he made sure to allow a transcript of the full three-and-a-half version to be released as a mass-market paperback when the film was released. (I have the book, and it counterpoints the longer version with the released version by having the script of one on the right hand pages, and the other on the left.)

I actually have my own misgivings about Opening Night, which is the only one of the eight JC “personal films” that I don’t think is a perfect work in its own way (it centers around a play that appears to never have been fully conceptualized by Cassavetes, and thus we're never sure what the characters are fretting over). Its strongest suit (besides the obviously brilliant lead performance by Rowlands and strong supporting work by Joan Blondell, Gazzara, and JC himself) is its “fantasy” plot element, in which Rowlands is haunted by a dead fan. This kind of “magical realism” touch was done to a finer turn by Cassavetes in Love Streams (which I think is messy but wildly underrated).

In any case, this piece of interview footage is raw and brilliant and terrific, as was the man himself.

And here is another snippet from the same chat. I love his assertion that “the world is comprised of people who have opinions and lack emotion.” I wish the whole tape was available somewhere for public consumption.

Thanks to the wonderfully talented indie filmmaker Amos Poe for pointing out this clip.
Posted by Media Funhouse at 5:21 PM