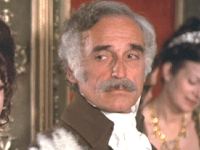 I love to say farewell to character people who depart "this mortal coil," and Harold Gould was certainly a prime example. An urbane and sophisticated performer, he was burned into the public’s retinas playing dads, lawyers, and friendly (but often austere) authority figures.

His best-remembered role is probably Rhoda’s dad on The Mary Tyler Moore Show and Rhoda, but the guy was on everything, once he quit his drama teacher job in the Sixties and became a full-time performer. His movie credits include a number of memorable Seventies comedies, including The Sting and Silent Movie, and he kept going until the 2000s, appearing as the grandfather in the Jamie Lee Curtis-Lindsay Lohan remake of Freaky Friday. His TV credits included The Twilight Zone, Mr. Ed, The Untouchables, Get Smart, Green Hornet, Wild Wild West, and the always delightful Columbo. (Not forgetting flops like Needles and Pins with Louis Nye and Norman Fell, and The Feather and Father Gang with Stefanie Powers.)

But what did I think of when I heard he had died? His part as an uptight nobleman who challenges Woody to a duel in the just-perfect Love and Death. The entire film is on YouTube (as are a few other key Woody pics), and here is the segment that includes the duel with Gould. The challenge occurs at the 8:00 mark with this Marx Brothers-like exchange:

God, I love Woody. And Gould was a perfect straight-man foil. The duel itself follows in Part 5: