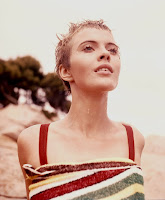 I first became entranced by Jean Seberg seeing the image of her in a striped shirt on an up escalator in Breathless, excerpted on a news magazine show back in 1979 or so. The program detailed how she was badgered and ultimately destroyed by COINTELPRO, a series of U.S. government projects to “neutralize political dissidents.” After I saw Breathless, I became a lifelong devotee of Godard (chronicled elsewhere on this blog), and was fascinated by Ms. Seberg, whose life is beautifully written about in the very sad and thorough biography Played Out by David Richards. The book, which is unfortunately out of print, has cried out to be a film now for several decades. Besides a failed West End musical, the only talk about doing a Seberg biopic was when Jodie Foster was supposedly interested in adapting the Richards book, and nothing came of it. 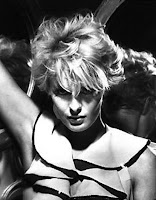 The episode below originally aired in 1998, upon the eve of what would have been her 60th birthday. The materials were supplied to me by the great NYC filmmaker (who’s now a Parisian critic) Mark Rappaport, whose essay film From the Journals of Jean Seberg had come out the year before (and whose fiction films are sadly unrepresented on U.S. DVD). He had heartily recommended the film Kill! for its sheer camp appeal, and he was undeniably right.

Part one contains my intro concerning Seberg’s life and work, with clips from her rare films playing over my capsule bio:


Part three is all wrapped up in Kill! because it will blow your mind:

Thanks for the photo shout! Great jobs on the tribute ... one of the clips in Pt. 1 is labeled as coming from La ligne demarcation, but is in fact from Who's Got the Black Box?/La route de Corinthe ... It's the poolside scene where she slaps Michel Bouquet.