I’ve talked on past Funhouse episodes about the phenomenon of American stars wanting to be “loved” and forsaking the art of acting as a result. There are exceptions — Johnny Depp is pretty adventurous in his choices; Sean Penn, Forest Whitaker, and Jennifer Jason Leigh in her prime have all shown they are willing to play unlikable characters or work in lower-budgeted films that are just, well… good films. I see this adventurous spirit in a lot more European (and, to an extent, Asian) stars, though. Today’s cases in point are Jane Birkin and her daughter Charlotte Gainsbourg. 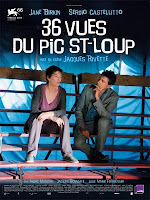 I’ve just seen the latest films starring both women, and both are remarkably off-mainstream pics in approach. Granted, Charlotte’s film has a fairly major U.S. arthouse distributor (IFC Films) and is a cause célèbre already, which will guarantee some attendance and possible pissed-off word-of-mouth from people who take a chance on it and just don't get it, 'cause they were looking for a braindead multiplex horror pic. At the other end of the spectrum, Jane’s movie, the latest film by Jacques Rivette, the underrated genius of the New Wave, is a quiet and slow, quite pacific character piece called 36 vues du Pic Saint Loup, which is being called Around a Small Mountain in English. The film works as a kind of short epilogue to Rivette’s work to date, touching on themes he explored in depth in the past: the thin line between theater and life, the tentativeness of male-female relationships, the stranger who learns more about a “clan” and tries to join in their activities. The clan in this case is a traveling circus troupe, and the stranger is Vittorio (Sergio Castellito), an Italian traveling from Milan to Barcelona. He falls for Jane B., as “Kate,” a woman who was banned from the circus by her father (yes, a touch of melodrama here…) after a “whip act” she was doing with her partner/boyfriend resulted in his death.

I have only met Ms. Birkin for the length of an interview I did with her (a half-hour at most), but she is a very lively, opinionated, no-nonsense kinda lady. She also is allowing herself to age very naturally, and this has become a very positive factor in her becoming a finer and finer actress. As most folks know, she began as a perfect “dollybird” in the Sixties, a model who was incredibly attractive and sexy, and who eventually solidified her place in French popular culture in her union with Funhouse god Serge Gainsbourg. Her life has therefore been lived pretty much in public (as has been Charlotte’s), but what has been heartening for her fans is that she has gone from a beautiful screen presence who simply looked nice, to a character performer who can actually act. In 36 vues, she is a “woman with a past” that is revealed as the film moves on. Rivette deftly revolves the film around Castellito’s intended flirtation with her — a charming instance of a late middle-aged near-romance, a la the last few films of Alain Resnais and Wong Kar-Wai’s In the Mood for Love. Rivette intercuts scenes from the circus's acts, including, yes, a pair of clowns who are as dependent on dialogue as they are on physical shtick (the Theater of the Absurd finally hits the Big Top). In the process, he uses theatrical devices in a cinematic way (as he has been doing since his masterwork L’Amour Fou, which I spoke about in a different context a few weeks back).

Birkin wears her age well. She has not had plastic surgery, and so major kudos to her. This makes her the polar opposite of Hollywood stars who transform their faces in a garish way as they get older, and even when they’re at a fairly young age (what motivated Nicole Kidman, a beauty who had “cred” as a legit actress, to fuck up her forehead with whatever procedure she had done?). Jane B. plays a troubled soul here and, along with Castellito, gets some of the film’s most wistful dialogue: at one point reflecting on why she needs to travel from the city to the countryside to properly dye fabric for a designer house, she reflects “The light just isn’t the same in the city.” Birkin is the biggest “star” in the film, but she doesn’t behave as such — she is part of the ensemble and can still appear glamorous, but doesn’t seemingly need or want to at this point. As a lady “of a certain age,” she has become a different kind of “dream girl.”

Charlotte, the daughter of the genius Serge, is the best actor in the whole Gainsbourg/Birkin clan, and shows her mother’s spirit for taking on adventurous roles — although I am usually struck by her impeccably refined upper-crust British accent. Her latest role in Lars von Trier’s Antichrist earned her the Best Actress award at Cannes, and an incredible amount of interviewers asking her what it was like to play a “misogynist” vision. Since I took the time to defend Roman Polanski last week, (whom, by the way, cranky Lars once referred to as “the Polish midget,” so I do revere auteurs who make fun of each other), I feel it is contingent on me to point out that I don’t feel that Von Trier is a misogynist. I feel he is a died in the wool utopian who has turned cynical, a misanthrope rather than a man who hates women. Women make good sufferers in cinema; I can’t enumerate the number of filmmakers who have centered on women in peril and/or crisis, but I’ll just haul two names out: John Cassavetes and Rainer Werner Fassbinder.

Of course… von Trier has something very different in mind with his latest outrage. Antichrist is a cerebral horror pic, a variation on both Strindberg (one of his favorite writers) and The Shining (hey, he should nick from Stephen King — since the latter completely wasted everyone’s time with his POINTLESS U.S. redo of The Kingdom). Much has been written about the film, and in fact *given away* by the press (suffice it to say it’s best if you don’t read too much about the freaking thing before you see it), but I think I’m on very safe ground to call it a tough, tense emotional psychodrama in the style of Strindberg, Bergman, and Cassavetes (him again!) that morphs into a full-out horror thriller as the film moves on. It is an ultimate “battle of the sexes” narrative acted out only by Charlotte and Willem Dafoe (there are no other performers in the film, literally, until an epilogue I will not go into here). Their relationship, as a couple who have lost their young child, is an Old Testament-like connection which superimposes Cain and Abel onto Adam and Eve (that one’s mine, haven’t seen that in any of the overly informational reviews and articles). I can only add that any fiction film that has a credit for “research on anxiety” has to be a little deeper (and a lot weirder) than it appears on first glance.

The film’s horrific third act, in which numerous physical acts of violence occur, transforms Antichrist from being a standard arthouse feature to a feature that might (that’s *might*) appeal to some mainstream viewers — most will no doubt hate it, as they wander in when the Halloween-weekend screenings of Saw 6 are sold out (it is installment six of that torture-porn franchise, ain’t it?). Gainsbourg’s triumph here is that she does indeed render Lars’ abstract vision of a woman in grief in a realistic fashion for the first two acts of the film. Her character is highly sympathetic, and is the emotional anchor of the film; Dafoe’s husband character is a therapist who wants to help his wife with grief therapy, but as von Trier noted in an interview included in the press kit, “my male protagonists are basically idiots, who don’t understand shit.” (Again, cynical and perhaps misanthropic, but not misogynist….)

von Trier has remained an enfant terrible as he has hit late middle age. He is a provocateur who has constantly sought new ways to rouse his audiences, from the literally hypnotic stylization of his first three films to the overriding theatricality of his “Dogville” trilogy (no one knows if he’ll ever make the third; in fact, this film sort of stands as the third leg of the “women in crisis” trilogy with Breaking the Waves and Dancer in the Dark, although Antichrist is much more extreme than those two wonderfully intense experiments were). In any case, Charlotte (I tend to use her first name since I so identify her last name with her legendary dad) and Dafoe carry the film without question — they convince us they are a functioning couple living somewhere in Seattle (the film was shot in Germany) who are very sexually active and did at one time love each other, but now are beyond the bend after their child has died.

The film stands with what I consider the best of modern horror, efforts by filmmakers like Lynch and Polanski (yes, him again) that upset the viewer in ways that don’t involve leaping out of your chair because a crazed killer in a scary mask has appeared onscreen. The most truly disturbing works of horror and suspense are those that put us on edge, and involve emotion and the mind rather than sheer adrenaline and a butcher knife. It’s also impossible to give a nuanced performance in a slasher or torture-porn pic, and Antichrist contains two terrific performances. It's no wonder where Charlotte G. got her adventurous spirit from — it’s no doubt a legacy of her immaculately talented father, and her mother, a fine actress who’s unafraid of the "horror" that is age.
Posted by Media Funhouse at 12:33 AM