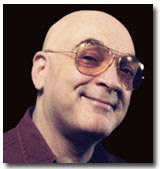 In my intermittent effort to post entire episodes on the Net, so that folks who don’t live in Manhattan can get an idea of what a full Funhouse show is like, this week I offer up the last episode, which was an in-depth interview with a “comedian’s comedian,” the wonderful, razor-sharp stand-up Chris Rush.

Chris is currently in the midst of developing a one-man show called Bliss at the theater at 45 Bleecker St. (called, wait for it, 45 Bleecker), which ties together all the threads of his comedy to date. His work is a fusion of quantum physics, Eastern mysticism, pop-culture insights and, well… pussy jokes (he uses the far-more-proper “T&A” during our interview). He also has a terrific ability to riff on pretty much any given topic, and did so in our chat. He’s a force of nature, and a comedian whose time has come. Thus, I give you… Chris Rush.

Part one, in which we discuss Chris’s leaving the Catholic church, his friendship with George Carlin, his opinions on the legalization of pot and drugs in society:


Part two includes Chris’s reflections on Lenny Bruce, the early days of National Lampoon (which he wrote for), and his singular and unique fascination with quantum physics:


Part three continues with Chris’s bit on Madison Avenue and the “accident” that Christ had….

Posted by Media Funhouse at 3:26 PM