A Funhouse clip becomes homework (!) as the show hits its 16th anniversary 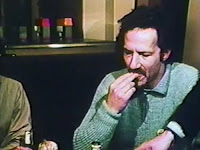 I have had some extremely nice and unusual things occur as a result of doing the Funhouse cable-access show since October 1993 (we turn 16 this month, babies!) and have been very gratified to see the number of visitors to this blog increase slowly but surely with each week.

Having worked on access for a while now, and never (ever) being aware of how many people are watching at any time, I do find the “counters” on Internet sites to be a pleasant development. Thus, I’ve been very happy to find that the most popular original clip I’ve put up on YouTube has been a segment from my interview with Jane Birkin, which has so far gotten 74,000 hits. I’m usually pleased to get a few dozen hits on the more obscure items, a few hundred on the “cult” material, and a few thousand on some of my favorite interviews, but there are wide smiles derived from getting 13,000 viewers on the Gena Rowland phone interview clip, 28,000 for Tura Satana (the first interview I ever “found” in a place I didn’t put it on the Net; I do like citation/plugs for the Funhouse site or blog to go with postings of the material, folks!), and 50,000 for Stella Stevens (when you’re talking about why Jerry Lewis snubbed you, everyone listens). Another * very* gratifying YouTube moment was receiving a positive comment on a segment from my Leos Carax interview from a film fan in Moscow, Russia.

And now, I have to extend my thanks to the very cool teacher “Ms. Loughlin” for having assigned her class to watch the video I had posted of scenes from Les Blank’s terrific short documentary “Werner Herzog Eats His Shoe." I had no idea this was going on until earlier today, when I saw comments that had been posted last month. It seems that Ms. Loughlin, who seems like a dream of a prof, told her students about Werner Herzog, and in particular the time he lost a very odd “bet” he had made with Errol Morris (who, when you think about it, had nothing to lose with the bet: all he had to do was make a feature film, which became the absolutely perfect Gates of Heaven, or not — no consumption of any footwear was required of him).

The clip had already received a boost in views when Conan O’Brien had mentioned the shoe-eating incident while interviewing Herzog one night (which, of course, I found out about way after it happened). Now Ms. Loughlin’s class has not only watched the clip, they took time to comment publicly on how crazy he is, and how he has a “cool accent.” They did use the word “respect” too, which is completely awesome — as a diehard fan of Herzog, I would have to admit that the notion of “insane” behavior has been part of Herzog’s public persona at various times (usually when he was working with his “best fiend,” of course), he does indeed possess the very coolest of accents, and deserves busloads of respect from those of us who love the cinema, and even those who don’t care about it at all, but simply admire a dedicated artist.

So, I salute you, Ms. Loughlin, whoever and wherever you are, for teaching young folk about Herzog and his strange experiments to “play the clown,” but also convey the message that television can rot the mind (bad television, that is). I had a few teachers who inspired me like you are doing with your students, and I’ve never forgotten them. You are providing, to quote the mighty Herzog, “a good example.”

In case you’ve never seen the short, here is my abridgement of it — and full credit goes, of course, to filmmaker and copyright owner Les Blank!