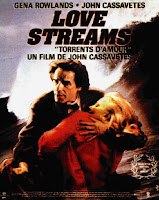 Following up on the character actor entry below, I felt I should definitely recommend a YouTube poster’s posting of the three “missing” films directed by John Cassavetes. Cassavetes made eight “personal” films that are the ones upon which his reputation as an indie godfather rests. I do love Too Late Blues and Gloria, but they are not in the same league as films like Shadows, Faces, and A Woman Under the Influence. The three films which his family does not hold the rights to aren’t seen as frequently, so it’s a very nice discovery to have them present on YT. Go visit, and watch, and download the clips (www.keepvid.com and www.javimoya.com make it possible).


I believe that Minnie and Moskowitz (1972) is the perfect entry point for those who are too timid to take on the masterful family-discord pics that Cassavetes excelled in. It’s an excellent comedy, with a superb cast:


And the final personal film has been completely “unfindable” in the U.S. for years, except on old VHS tapes, Love Streams (1984):