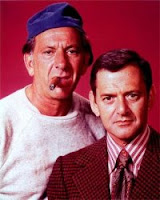 So I still haven’t forgiven Game Show Network for killing off their classic b&w shows, in favor of an all-color, all-underwhelming schedule. Down in the standard line-up of channels, it’s nearly impossible to find b&w programming or films of any kind (unless PBS dusts off its evergreen, or public domain, titles). WPIX-TV, Ch. 11, is the only local commercial channel here in NYC that airs anything made before 1980. The shows, up until recently, numbered four: the weekly hour of Honeymooners (in which case the PIX programmer is dead asleep and chooses the same two or three dozen episodes — out of a syndicated pool of over a hundred — again and again and again); The Jeffersons (which was unfunny back in the Seventies when I was a kid, and it’s still unfunny); the once and future classic 79-ep Star Trek, and a New York City favorite, The Odd Couple with Tony Randall and Jack Klugman.

The Odd Couple is a show that should be perennially running in NYC, just as Naked City and several other Manhattan-set shows should be on the air (I know, I know, Seinfeld was set here, but MAN were those street sets phony as hell!). I rediscovered The Odd Couple last year when I had a period where I had no access to cable in the late evening hours. The show’s first season was dreadful, as it was shot with a single camera on the play’s set without a studio audience. Once Randall and Klugman flexed some muscle and the show was done with an audience on the set that is familiar to most viewers, it became one of the Seventies’ best sitcoms, with a starring duo who were born to play the roles (and, in both cases, seemed to live their parts off-screen). The show’s odd continuity changes (where the guys lived, how they met, how their friends came together, when they married) were totally excusable (Garry Marshall did far worse on his later Happy Days by just deleting a central character completely!), since the series was well-written and splendidly cast, from the guest stars to the boys’ love interests to the walk-on character actors (which included much of Sgt. Bilko’s platoon, as well as the sacred Victor Buono and the unforgettable Leonard Barr; Funhouse fave Wally Cox also appeared, but has been scissored out of the syndicated versions of the shows). 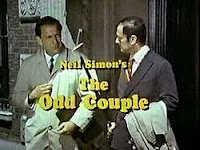 Anyway, much as GSN decided to utterly drop any hint of b&w and replace the best quality programs they had on with Family Feuds and the daytime color Password — never as good as the nighttime weekly version — WPIX recently dumped its airing of The Odd Couple for… an infomercial! This isn’t surprising at all, but what was interesting is that after the one half-hour infomercial that took the place of the “original OC,” they return to the schedule as it formerly was: the grievously unfunny Jeffersons, and the newer reruns (edited Comedy Central titles), and then… more informercials! And yet WPIX has left in place the most inane present-day stuff available: edited Sex and the City, Three and a Half Men, The George Lopez Show (I’m so glad other ethnicities can have bad sitcoms now too), and, worst by far, According to Jim (there is a special area in Hell carved out for the works of James Belushi). So, we lose a N.Y. tradition, but we get another infomercial stuck right in the middle of the late-night program schedule, and those who do want to see decent older television have to resort to DVDs or nothing at all. Perhaps the best part was that, in the last few go-rounds of the “OC” cycle, WPIX kept leaving out the same shows over and over again (including a personal fave — in which Felix and Oscar are trapped in a stalled subway car). Now the show is gone completely in NYC. Thank ya, PIX. Keep the legacy alive!

Plus, I really need a nightly dose of this guy:

UPDATE: The show was put back on after I wrote this and was then eventually pulled, as was the weekly airing of The Honeymooners.
Posted by Media Funhouse at 11:28 PM

I think it still airs up here, sucker!

Our correspondent refers to the Great White North where, yes, one of the great NYC sitcoms does indeed air on cable. In NYC... not so much.