Goodbye, analog TV: it was never pretty, but it always worked... 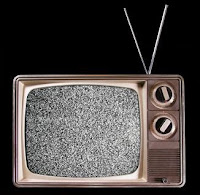 I remember a mere ten years ago, walking by some guy, presumably homeless, on a street corner in my neighborhood. He was sitting in a beach chair on the sidewalk, watching WWE Smackdown of a Thursday evening, with his teenytiny b&w TV set hooked into a lamppost base, where he had looped the sucker in and was getting a pretty damned clear signal….

But now the conversion of all U.S. television is completed. Analog TV is over, and so is the notion of free television broadcasting. With analog signals, anyone who had a TV of any kind and any decent antenna could watch something — it might have not looked very good, but you got a signal, the damned thing worked, and it was now up to the networks and local affiliates to actually give you something worth watching (they, of course, have pretty much given up the ghost — oops, an analog pun!). With digital, you’ve got a gorgeously beautiful, detailed, richly colored picture. But you’re gonna pay for it, sucker.

Most of us already are paying for cable or satellite service, of course, but I do reflect on my parents who, for whatever reason (financial, habit, technophobia) had continued to use rabbit ears on their TV sets. When I installed the wondrous digital converter box for my dad, I discovered that the piece of crap draws in the digital signal using the rabbit-ears antenna, and is actually more whimsical and subject to errant transmission than the antenna itself. With the antenna connected to the box — and oh, you have to get a SPECIFIC antenna that draws in the UHF channels (including PBS stations that were on the VHF lineup, but were broadcasting using UHF frequencies) — you could get two or three stations with the antenna this way and you go another two or three angled that way across the room. In other words, it’s a far worse set-up than rabbit-ears. Thus both of my parents decided that the basic level of cable was the only option to actually get the channels in … except for those occasions once every two-three months where the signal just goes and you’re left with a box receiving nothing from the coax cable (I had one of these last week).

Thus, it must be honestly said that the TV makers of the world and the cable companies are thrilled with this federally-mandated digital conversion, which Obama did thankfully delay — but, again, what is it exactly making better? (We aren't going to be converting over to the super-beautiful, more-lines-per-image European system.) It makes no one’s life easier or better (those who wanted a better picture and could afford it… already have it!), and just troubles low-income folks who can use their coupons to get a digital converter box that must be programmed, channel for channel. And there is nothing, believe me, nothing more fun than trying to explain to a senior who is used to the “ghosts” and snow of yesteryear why the television transmission just suddenly froze, and a still picture is on their set. “Well, you see… you’d now have to take this antenna and move it around the room until you find the signal again. Then leave the antenna in that place — use a chair or something to prop it… what about this TV table over here, you don’t use this…”

The conversion was a fraud and a sham, and it simply benefits those who make TVs and the cable and satellite megacorps. It also permanently erases the “snow” that indicated that “our programming day has now ended…” (cue National Anthem) I already discussed how I believe that while digital is the “prettiest” medium around, its innate “planned obsolescence” is the neatest money-burning trick to come along in quite a while. Now that the entirety of the U.S. has been forced by government mandate to make this conversion (hey, the vacated bandwidth will be used, we’re assured, “for public emergencies” — and how would we tune the damned things in, if we shed our analog equipment?). Some technological upgrades are awesome in their potential for bettering our modes of disseminating culture and ideas. Some are just holidays for the greedy.


For more sobering footage, a Missouri resident captured the moment it happened for his town, right at midnight last night:


A Philly viewer caught an even more emblematic image: commercials (of course!!!) going to the station logo, and then… it’s over:

For some funereal music to play, I suggest the Cramp’s “TV Set” and, of course, the song mentioned a few weeks back as the finest paean to tube-addiction, the Normal’s “TVOD.”
Posted by Media Funhouse at 6:17 PM