Still "unabideable": the slippery streets of the city 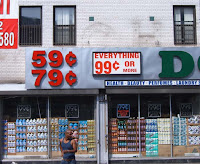 I wrote a blog entry when I had health insurance from my job, and now I have none, so it’s even more relevant. It involves the increasingly slippery sidewalks of NYC, and it can be found here

Since my last rant-post mentioned Queens, I will now evoke Brooklyn and say that I’m freelancing (ah, the life of instability, how it molds the modern man…) a block away from the shopping area laughingly called the “Fulton Mall.” It’s a commercial area filled with crappy clothing stores blasting awful music (although it does have cheesy low-rent emporia that fascinate me like the one in the pic), but it also has one of my chief banes, one that can only get worse when it rains (rhyme unintentional, but inevitable): the new-model pavement that appears in so many commercial and upscale areas of the Five Boroughs. It's not quite the marbleized nightmare that rules Park Avenue and other upscale districts in Manhattan, but it also isn't the old traditional gray, drab, reliable kind (read: it's wretched to navigate during a downpour). In other words, if you’re uninsured, or old, or unsteady on your pins, you just know you’re going to take a tumble. The only solution, besides wearing rubbers or rubber-soled shoes everywhere, alla time, is to take baby-steps and proceed with ever so much care when the torrents are upon the city. No, we don’t need no national healthcare, not at all, ever….
Posted by Media Funhouse at 12:31 AM