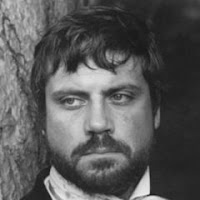 This week I’m presenting the first part of my Ken Russell interview on the show. We discuss Oliver Reed, who starred in six of Mr. Russell’s films, and, interestingly, Ken says he doesn’t think Oliver was much of an actor, didn’t have much range. I would agree that he walked through a number of films, but he is exceptionally good in Russell’s work (perhaps because of the “system” they worked out — see the show to find out about it). You can currently view the entirety of Russell’s masterpiece, The Devils online. I’m not really sure how it has stayed up there, since YouTube is run by Americans, and thus is petrified by the very notion of nudity. Anyway, the film is a must-see (although it really needs to be viewed on at least a TV screen):

I would recommend heavily that you see Reed’s other works with Russell: The Debussy Film, Dante’s Inferno (where his readings of Rossetti's poems are sublime), and naturally enough, Tommy (Ollie’s scream-singing is quite something). Reed also starred in Russell’s Women in Love, where he participated in a scene that will NEVER be on YouTube — I’m talking, of course, about the insane naked wrestling scene with Alan Bates that pops into the film almost out of nowhere.

Over in the U.S., we did see Mr. Reed quite a lot on the big screen, but he also made an indelible impression on TV. He was one of several stars (I remember Robert Blake being one of the others) who invariably came on talk shows roaring drunk (his problem with booze ended his life prematurely at 62). I have assembled a little “round-up” of Ollie drunk on talk shows here and in England and, let me assure you, these are quite entertaining clips.

There is a full documentary about Reed that is available here. But I will start off the survey with this fascinating example of Reed stone-cold sober. He’s on The Tonight Show in 1975 with Shelley Winters, who is a major-league pain in the ass. In the third part of the interview, Ollie talks back to the never-quiet Shelley Winters, and makes a sexist remark that causes her to throw a drink in his face. It gets good about 2:30 in:

Here he is doing an insane American accent on the NBC Letterman. I think it should be entered into the record that everybody’s fave friendly host Dave was always an absolutely SHITTY straight man as a talk-show host, and seemed openly aggravated by many of his guests during the NBC years. He never, ever could play along with them, especially with comedians doing a character, like Pee-Wee, Andy Kaufman, or Bobcat. He in fact loved to show them up. Let me put this plainly: He sucked! Oliver, on the other hand, rocked:

Here he looks very worse for the wear, on a British show called After Dark, where he seems to be puzzling the other guests. Amazing television. This is actually a pretty interesting debate on violence, with Ollie in the middle.

On the British show The Word. He sings “Wild Thing” with the band Ned’s Atomic Dustbin!

Context for the preceding outburst can be found here. Now, would you rather watch Leno, or Letterman, or Kimmel, or Conan, or Craig letting someone pitch their latest bad movie, or bad sitcom, or bad CD, or would you rather have seen Ollie?
Posted by Media Funhouse at 1:07 AM

Amazing clips of Oliver Reed! I am now motivated to see "The Devils." Who knew he appeared in more than one film featuring reenactments of the birth of Venus?

And you are dead on about Letterman's discomfort with extreme performances. I think it has more to do with his unease with the unpredictable. When "Pulp Fiction" came out, Tarantino was on his show describing how he wanted Uma Thurman to dance, and he acted it out, to the delight of the audience. Dave became visible upset and cut to commercial.

That should be "visibly."