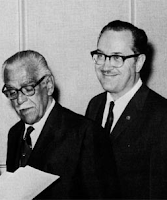 ...or Uncle Forry, as he was known to a few generations of fanboys and fangirls over the past five decades. Forry's influence on fandom was, well, monstrously important (that one's for you, Sir): from his pioneering photo-gathering and pun-smithing chores on Famous Monsters of Filmland; to his appearances at fancons from the VERY first ones in the 1930s to the modern-day gatherings that take up entire cities; to his appearances in movies by Dante, Landis, Olen Ray, et al; to his utter childlike worship of Boris, Bela, Price, and of course, Lon Sr. — not forgetting the one monster that reduced three wonderful senior citizens (Forry, Ray Bradbury, and Ray Harryhausen) into little boys again on several occasions, King Kong (I hope I can be that young at their age, truly). He had a good bit of fun in his life from all directions (the Bill Landis bio of Kenneth Anger gets into the "sex-magick rituals" that used to be held at the Ackermansion, yowzah), and he will be missed by us all. He and the two Rays were the first generation of fanboys, and as such they deserve our admiration, respect, and love.

First I will direct you to Richard Corliss's wonderful obit for the man.

Then I will send you flying into "Music for Robots" an album credited to Forry, posted at the 36 15 blogspot.

Then, I must pass on this trove of the COVERS of FM, which should stir the soul of any proud fan-person. The first issue I had is on the right, but all the original covers can be found here. Go now!

Then I note that I am indeed extremely proud I got to interview the gent, and got the full tour of the Ackermansion. Here are the two clips I posted from our talk on YouTube. On Bela:


He tossed off at some point that he would like to have a good home for his awesomely beautiful collection of memorabilia (a lot of which was liquidated when his medical bills became too high a few years back, a tragedy), when he had gone "to that big sci-fi convention in the sky." He surely isn't standing in line, and is the first boy racing to the tables right now....
Posted by Media Funhouse at 3:42 PM