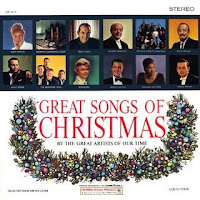 I think even those who do delight in the seasonal insanity that is Christmas would admit that Xmas music is played to fucking death. Since I do a program that more often than not takes a “nostalgic” look at pop culture, I’m of course more interested in the way that old music shows up around the holidays. I was walking on the main street in Astoria Queens (Steinway) today, and heard some lesser-known Christmas tune by the Supremes being piped in all along the length of the street. This started several years ago, major streets and thoroughfares having Xmas music piped in to encourage folks to buy things. Of course, I think that kind of attempted brainwash backfires, as those who are going to buy will buy anyway, and those who don’t have the dough, or have other modes of buying things, or simply have no one to buy anything for, are just going to run for cover every time another one of those fucking tunes starts up over the loudspeaker.

I love vintage American music, “popular standards,” old singles, novelty tunes, and any old kinda crap that has a killer hook to it. What I find so overwhelming and obnoxious about the Xmas-music overload is that it’s the one time of the year that radio (yes, I still listen to commercial radio, for better or worse — mostly talk) plays old music. When else would you hear Gene Autry or Burl Ives but during the Christmas season? Burl and Gene might’ve gotten a spin on good old Joe Franklin’s now-defunct show here in NYC (I remember Joe playing an extremely maudlin Autry tune about children visiting their mother’s grave as a Mom’s Day song one year), but the best older music, the things written by the big guys (Gershwin, Porter, Kern, all those dead men) will never see the light of day on NY radio again — but during the holidays, we hear “Rudolph” and “Frosty” and “Silver Bells” and five to six dozen tunes that form the “canon” of Xmas music (that extends to “Run, Run, Rudolph” and, gak, “Last Christmas” by George Michael). So, old music is indeed out there, you might enjoy it, but no, that’s a horribly narrow demographic, that stuff can’t be played on the radio — unless, of course, if it can foster pretend dreams of a Norman Rockwell world that never existed, even when these songs were gracing the top 40 for the first time. Some of the songs are actually wonderful, some of the cornball renditions by such unrepentantly uncool performers like the Mitch Miller singers or Johnny Mathis or Der Bingle, ad infinitum, ad nauseam, do have their charms. But as they assault the senses in stores and on sidewalks, they are as horrible to encounter as the oldies I love so dearly being trussed up and thrown out on oldies stations, or the “classic rock” that actually does still have the power to stir it up — but not on classic-rock radio.

All self-evident to most of the people who would choose to read these words, but as I stand in the drug store listening to some hoary old number for the umpteenth time, I wonder if the folks who run the Duane Reade chain (or Rite Aid or CVS) actually think that assaulting the senses with the feeblest of nostalgic tunes (or the most touching, like “Have Yourself a Merry Little Christmas,” run into the ground until it no longer has any resonance) inspires added commerce. Or if it’s as most of us suspect: that the multitude of holiday shoppers (say, the ones who killed that guy at Walmart on Long Island on Black Friday by trampling on him to get to the big-screen TVs) will spend themselves into poverty no matter what is playing on the loudspeaker, and the overload of holiday music is just another game engaged in by our beloved capitalist society. One more reason that I completely resist the arrival of the holiday season… but then, due to not ever having that idyllic never-was, never-will-be Yuletide, completely miss it once it’s actually over….
Posted by Media Funhouse at 12:34 AM