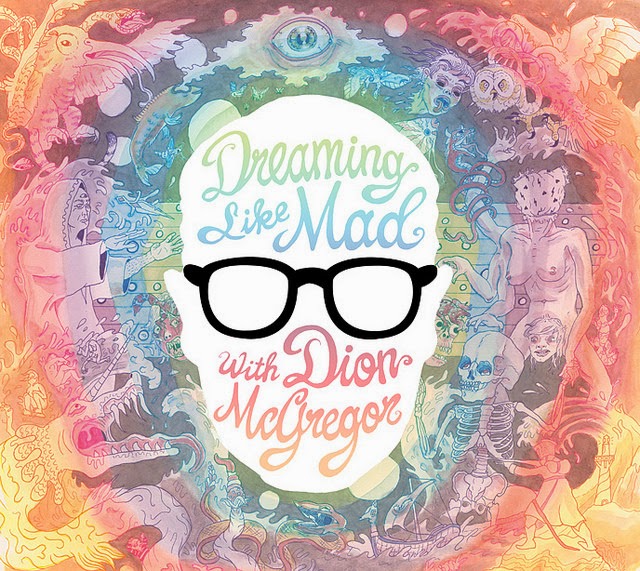 It’s no surprise when a music label comes up with a live recording of a major deceased comedian. The fact that we can now hear more from renowned “sleeptalker” (read: monologist) Dion McGregor is indeed a surprise, though, and a very pleasant one at that. If you’ve never heard of McGregor (who died in 1994), I wrote a sort of “101” intro to him here. The short version of the story is that he was a songwriter and playwright whose music never made him famous, but his penchant for talking in his sleep did.

Legend has it that McGregor’s roommate Michael Barr was so amazed by the crazed, imaginative monologues that Dion was dispensing while asleep that he began to record them. He taped hours of these monologues, known as “somniloquies,” and the result was an uncategorizable 1964 Decca LP called The Dream World of Dion McGregor (He Talks in His Sleep) and a book of “transcripts” of the dreams (also 1964), with memorable illustrations by Edward Gorey.

As I noted in my last post about McGregor, I was very surprised to find that additional CDs of previously unheard dreams had been released in 1999 (Dion McGregor Dreams Again) and 2004 (The Further Somniloquies of Dion McGregor). The new release is called Dreaming Like Mad and has been released by Torpor Vigil Records. 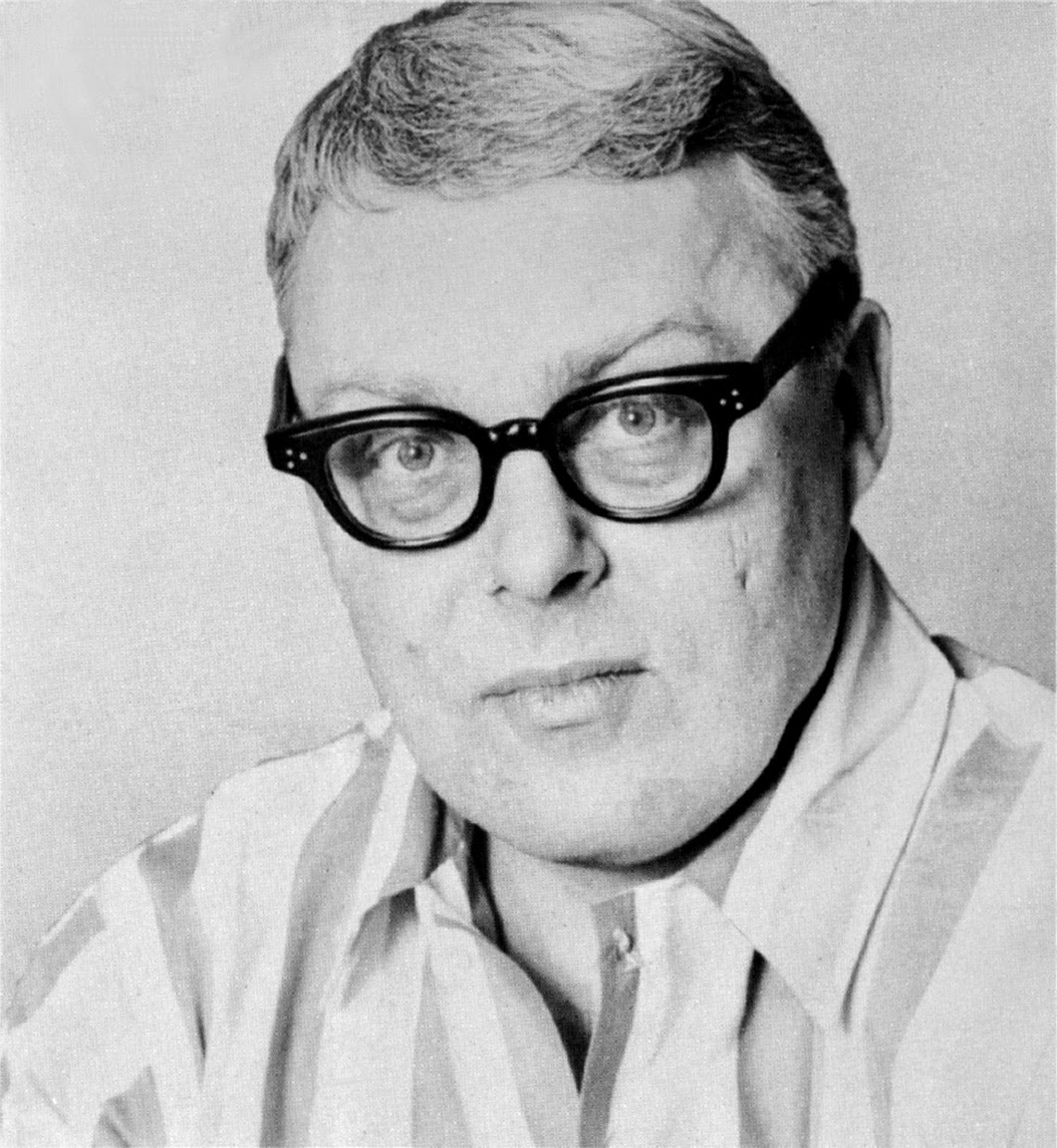 McGregor’s monologues range from playful and silly to delightfully grim and even “sick” (in the manner of what was called in the Fifties “sick humor” — foremost practitioner: Lenny Bruce, namechecked in one dream here by Dion). McGregor is the monologist equivalent of Charles Addams, sketching outlandish first-person scenarios in which something unusual is happening and our narrator is either accepting it as commonplace or growing steadily more uneasy, until his voice begins to rise and he starts signaling the end of the piece (in keeping with the “sleeptalk” mythology, this would be the point where Dion would awaken, or fall out of bed).

There are 15 tracks on Dreaming Like Mad. All are great, but a third of the entries are exemplary slice of weirdness. The opening track sets the mood with Dion explaining how he and his friends have disappeared into the Sunday New York Times. As is common with McGregor’s dreams, this surreal transformation is recorded in a deadpan fashion. Take a listen to this strange odyssey for free, courtesy of Torpor Vigil Records. 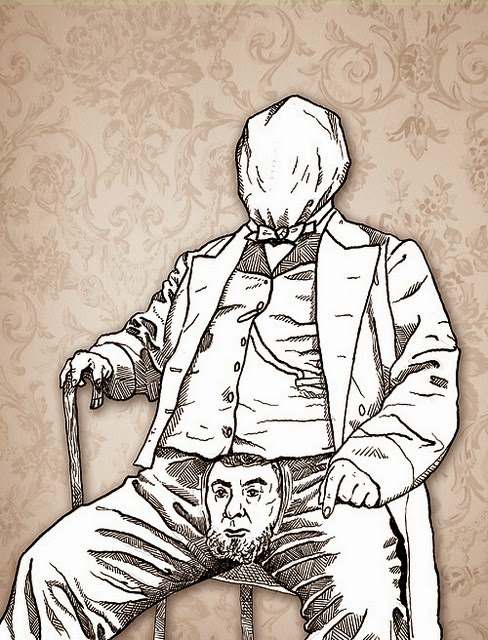 A more “adult” dream finds Dion talking about a woman whose face is located near her “snatch” — her obvious dream man being a guy whose face is located in his crotch as well. Perhaps the most fitting entry has a quartet tossing a disembodied head from person to person. McGregor’s funniest monologues are always delivered with both an urgency and a sense of childlike innocence, making the dark aspects even more ghoulish.

The piece that has the most urgency to it is Dion’s invitation to join the “TYN” club. He implores a friend to come to a demonstration at the New York Herald Tribune where everyone will thumb their noses (thus the “TYN”) at dour film critic Judith Crist.

“There are big lists all made up, controversial people. Everybody knows about TYN! You get your pin, you get a placard…. [The police] threatened to put us in jail — we said ‘Come right ahead.’ We thumbed our noses. ‘TYN to you too, police!’ That’s right… Oh well, I don’t know — it doesn’t accomplish any good…” Dion then reveals that the club had a dilemma: one of the members wanted to thumb his nose at Lenny Bruce. But since Lenny founded the club, they just can’t do that (although they’re not racist — Eartha Kitt is also on their list for a thumbing).

One of the finest nightmare scenarios on the album is a refined gathering of couples. McGregor often “dreamed” deranged versions of very straight suburban scenarios (Dion, for the record, was gay). Cocktails or a meal are not the reason for this get-together, though — this is an “execution party,” in which guests are drilled with a machine gun and their bodies placed in piles. Always thinking of orderliness (even while asleep?), Dion cautions a woman guest to calm down or “we’ll throw your body on the female pile!” 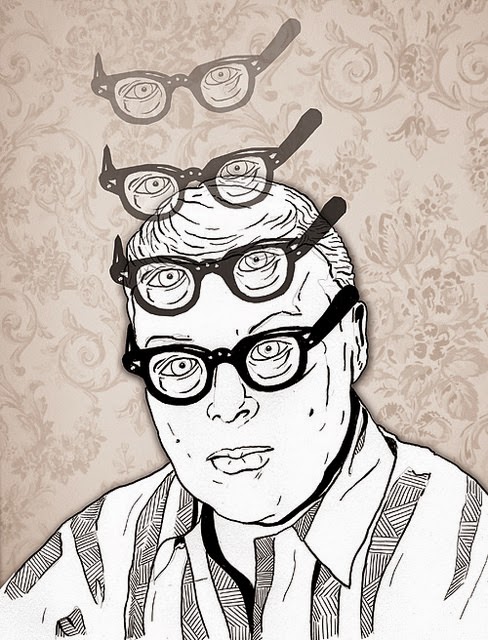 Three things distinguish McGregor’s oddball humor. The first is the fact that his monologues are delivered in a NYC apartment late at night — there’s no audience, no laugh track, no “professional” aspect to his performances. The second thing that makes McGregor unique is his conversational tone, which makes it seems like the pieces are organically growing as they continue. The last striking thing about his “somniloquies” is the fact that these recordings serve as a peculiar portal to the past. Whether he’s awake or asleep (more on that below), we’re hearing a man in his apartment in the Sixties (his roommate recorded him from 1961-‘67) spinning these tales as street sounds intrude on a regular basis.

As I mentioned in my last entry on McGregor, the people who knew him firmly maintained that Dion was doing these monologues while he was sound asleep. I find this extremely hard to believe, since his dreams are not only uncannily linear (albeit wild, bizarre, surreal, and grim) but they also explore the situation at hand from every possible angle (as an author or comedian would, for maximum results).

Some of his dreams simply trail off and some end with his trademark strangled scream — which his neighbors must’ve loved in the late-evening hours — but some actually do have punchlines. A few of his monologues also have the gradual revelation of some pivotal piece of information, as with the revelation that “TYN” stands for “thumb your nose.” I will admit that there is one thing that supports the notion that he really was sleeping — the fact that he seemed unable to write this kind of material in his “waking life.” My contention that McGregor’s dreams seem pre-scripted (or at least pre-structured) is perhaps a reflection of my own inability to have a linear, “conceptual” dream that comes anywhere near the twisted poetry that Dion came up with. (His name, btw, was short for “Dionysus” — it wasn’t pronounced like Mr. DiMucci.)

As I wrote this piece, I received a note from Steve Venright of Torpor Vigil, which I will quote from here to offer the other side of the story. After noting that McGregor’s previous roommate Carleton Carpenter (yes, this guy) was bothered by Dion talking in his sleep, Steve notes “I have no reason… to disbelieve the lovable Michael Barr when he told me, and many others before, that the first recording he made of Dion was without his friend's awareness, and that Dion was truly surprised the next morning when he heard the extent to which he somniloquized. The dream tapes became a lifelong obsession for Barr. “Some of the unreleased recordings in the archive are absolutely not the sounds of someone attempting to convey convincingly a narrative. They're mumbled, moaned, delirious-sounding. They're not the ones that make it onto track lists. Despite my own certainty that Dion was not in a waking state or even merely in a ‘trance oratory’ state, I welcome discussion on the matter of just where these emanations came from. It does seem impossible that so many literary devices would be at play when someone's not consciously producing the plot — but that, to me, is part of the absolute wonder of these recordings and of the McGregor phenomenon.”

Whether McGregor’s dream-monologues represented an unconscious form of “automatic writing,” or his friends and he created a fanciful “package” for his ideas, doesn’t really matter in the long run. What matters is that McGregor was a very creative humorist whose visions of urban life and casual morbidity are unforgettable. Steve V. has noted to me in correspondence that there are stil many more unheard “somniloquies.” If they’re all as good as the items on Dreaming Like Mad, that’s nothing to thumb your nose at.
*****

The fine folks at Torpor Vigil (order the album from their website) have made three of the tracks from Dreaming Like Mad available here for free.

A trippy remix of snippets of McGregor audio has been posted to promote the new album:

And the whole first album — which is now priced at 500 dollars on Amazon (the Gorey-illustrated book is only a mere 100 bucks-plus) — can heard here, thanks to a helpful fan.

Posted by Media Funhouse at 5:40 PM