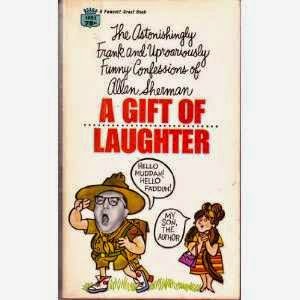 Like every maniacal book collector, I have several shelves of tomes I’m dying to dig into. As I accumulate more and more books, the older “items I must read” get buried further and further back in the collection until they are obscured from sight. When I am reminded of a title and finally do read it, I’m usually delighted and wonder “Why *did* it take so long for me to get around to reading that?”

Anything can spur on these dives into “the stacks” — in the case of Allan Sherman’s out-of-print 1965 autobiography A Gift of Laughter, it was attending Hal Willner’s recent “songbook” show devoted to “My Son, the Nut.”

Sherman’s autobio is a curious item — an obvious by-product of his enormous popularity during the Kennedy era, the book could’ve been a quick “cash-in” that simply celebrated Sherman’s rise to fame and his discovery that the silly songs he performed at his friend’s parties could be enjoyed by millions of people.

The book is more than that, though. It’s a funny, sincere self-portrait that finds Sherman talking about his depression, self-pity, binge-shopping, binge-eating, and drinking (all of which cumulatively caused his early death at 49). The book contains two “voices” — one in roman type that tells the stories of Allan’s life in a straightforward manner, and another in italics finds Sherman offering his thoughts and reflections on the topic at hand.

This “schizo” approach is fascinating, in that it offers us the sad underside of the happiest moments in Sherman’s life – even at the height of his fame he remembered being unemployable in show business. It is also quite curious, given that the book was cowritten by ghostwriter Maurice Zolotow.

The participation of Zolotow is mentioned in the new Sherman biography Overweight Sensation. The author of that book, Marc Cohen, introduces the notion that Zolotow wrote the book for Allan, but he also quotes it quite liberally — each time he needs Allan's own words, he turns to Gift, introducing each quote with the phrase "Allan wrote..."


He also notes the inclusion in Gift of a story about how Sherman suffered a sad fate as a teen (an atrophied testicle) when he chose to ogle a sexy family cleaning girl while having the mumps. Interestingly, Cohen quotes the story and then says, “Sherman wrote,” indicating that some items in the book are indisputably Allan's (read: the all-too-honest and sad items). This and a few other teen-sex stories cost Sherman a contract with General Mills. (Cohen quotes Allan's wife at the time: “The sex scene cost us $50,000. I told him not to, but he said it's the truth and I've got to tell it.”)

As I write this, I’m nearly through Sherman’s second “adult” book (he also created a short humor tome and two kiddie books), the sharply funny 1973 study of the sexual revolution with the unwieldy title The Rape of the A*P*E* (American Puritan Ethic). This book is entirely Sherman’s work, according to Cohen, and so it’s a good guide by which to judge the authorship of Gift. [Note: Cohen learned about Zolotow's close friendship with Allan and his ghostwriting of Gift from Zolotow’s daughter, the poetically named “Crescent Dragonwagon.”]

Comparing the two books, it’s evident that, Sherman’s “voice” is definitely present in the italicized segments of Gift, and even in some of the sections in roman type. If anything, Zolotow most definitely “cleaned up” Sherman’s prose, as A*P*E* indicates that Allan was prone to cursing a lot (or was that just a function of subject of that book, namely sex?).

In any case, being a big fan of Sherman’s albums, I found Gift fascinating, especially because of its many passages in which Sherman “preaches” about social hypocrisy (which is the raison d’etre of A*P*E*). He also dwells on the decision that changed his life — when he was asked by his mother to choose which parent he wanted to live with:

Cohen refrains from quoting Gift, presumably because the book was ghostwritten. This happens to be one of the strangest cases of ghostwriting then, though, because if Zolotow was speaking for his good friend Allan (their friendship is mentioned in the book), he saw fit to assume the voice of Sherman discussing his “increasing withdrawal from reality” during difficult times in his life: 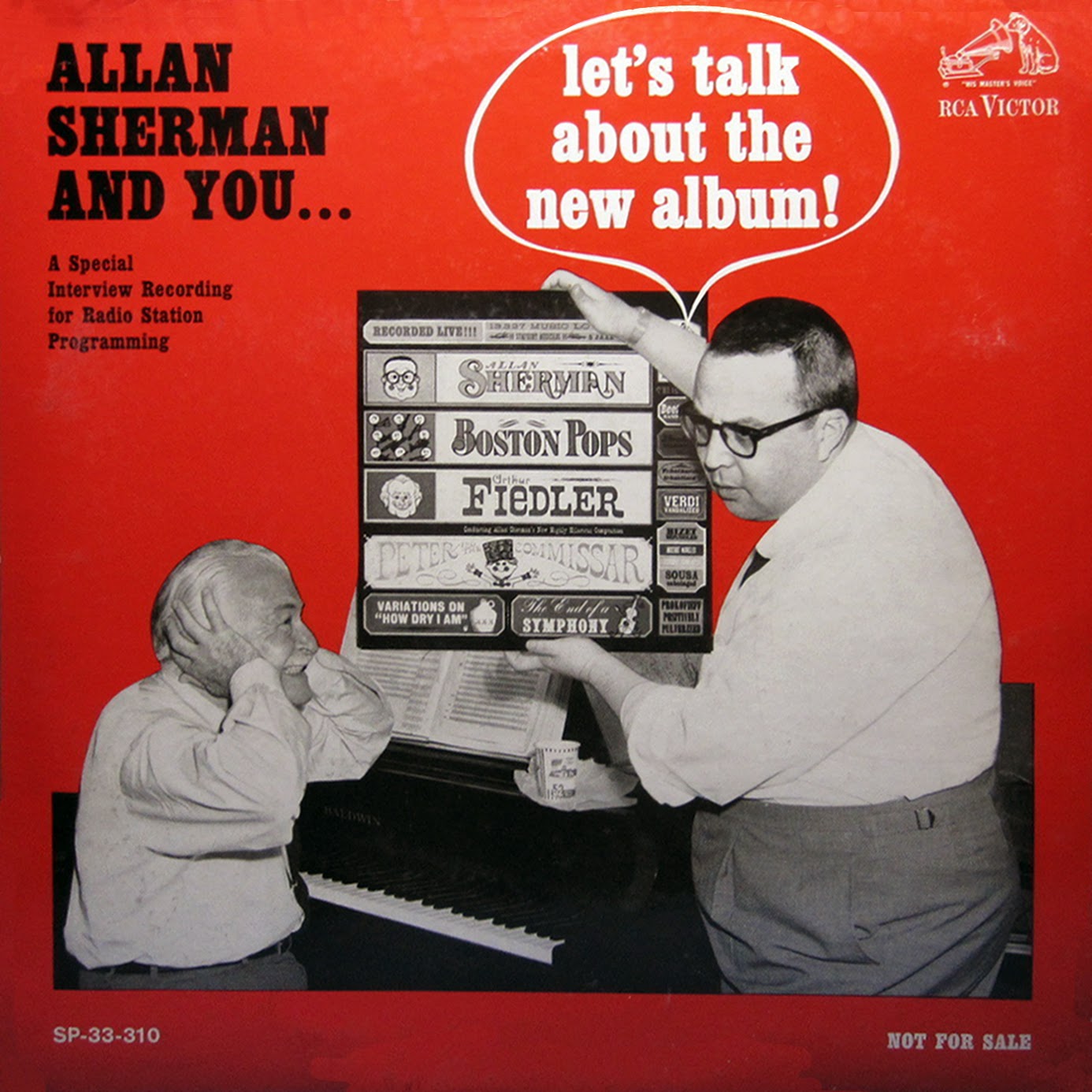 Since one assumes a ghostwriter would, by necessity, “brighten” his/her subject’s autobiography, it’s both fascinating and sobering to read passages in which Sherman’s moods are discussed. Considering that the book was written in 1964, when his records were still selling, it’s very revealing:

Allan was a humorist first and foremost, though, and so the book does contain numerous instances in which the tangents are delightfully funny instead of achingly sad. When speaking of the Yiddish plays his grandfather used to bring him to, Sherman reflects that the actors didn’t just act out a death scene, their characters would proclaim, “I am dying! I am dying! Oh, God, I am dying!” The character would then give a speech that includes “all of the philosophical Talmudic learnings of his life, and it is chock full of advice to his sons and daughters and farewells to his daughters and his wife, and this speech alone lasts five minutes.”

Once the speech is over, the character tries to stand up and… “he lets out this horrible, croaking groan and stumbles over the entire stage again, knocking over what’s left of the furniture and family, and finally he dies…. If the play is a musical, it is exactly the same, except with singing and dancing and very melancholy music underscoring the whole thing.” The audience, “who have troubles of their own,” enjoy the scene, “and they moan and groan and weep, and when he is finally dead, they sigh with relief and they feel this wonderful sense of total satisfaction.” 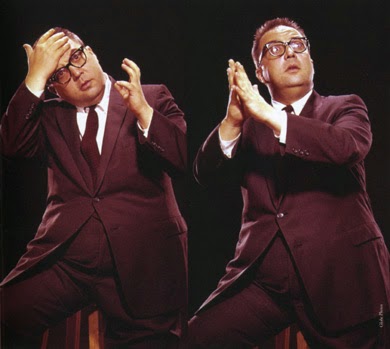 Gift thus offers some great bits that are perfectly in line with the humor on Sherman’s LPs. Although a good deal of it is timeless, thanks to his deft wordplay and downright strange and fun outlook on life, a chunk of Sherman’s music is tied up with the Fifties “exodus” of city-dwellers to the suburbs, as well as the industry that seemed to define the era (and the “Camelot” period that followed), the advertising business.

Sherman had no use for the latter, referring to the “gray flannel snake pit” that ruled TV in the Fifties. Gift contains many complaints about the rigidness Sherman encountered while working for Goodson Todman as the producer and co-creator of I’ve Got a Secret.

The opinions about advertising expressed in Gift are a product of the same mindset that produced the Sherman songs that serve as “snapshots of an era,” like his Gilbert and Sullivan rewrite “When I Was a Lad” (found here at 23:35):

And his superb laundry list of bogus terms and chemicals utilized by ad agencies to convince the public to keep buying familiar products (seen here with snappy animation accompaniment):

Allan also had many pungent (and, as ever, catchy and tuneful) things to say about the “urban flight” to the suburbs. In Gift he discusses how owning a home in the burbs meant constantly being in a state of renovation. He also showcases his favorite pithy summation of the situation by his friend, the great Carl Reiner (who gave us one of the most idyllic portraits of suburbia in The Dick Van Dyke Show). Said Reiner:

Allan’s most sublime commentaries on suburban living were of course expressed in his songs. Here is his excellent update of the English folk tune “Country Gardens” called “Here’s to the Crabgrass” (at 15:28):

After tackling the ad game and suburbia, Allan examines Los Angeles in Gift. He discusses how you’re only as good as your last hit in L.A., and comes up with a beautiful snapshot-phrase to describe the place: 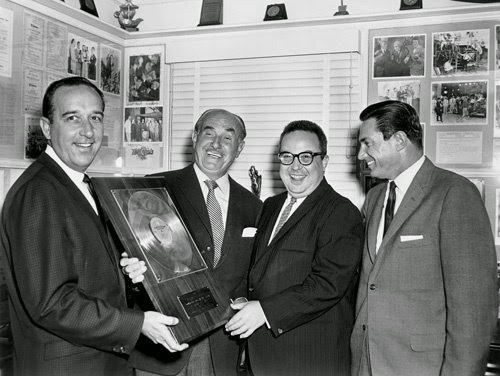 Sherman was thought of as a singer of “Jewish parodies” but, as his albums indicate, his skill at wordplay transcended his ability to hone ethnic spoofs of popular songs. He definitely felt hemmed in by this definition and was in fact not fond at all of the main stomping ground for Jewish entertainment, namely the Borsch Belt:

I don't know why those same people go ever summer to the Catskill Mountains. I don't know why they want to be in a ghetto, even one that's full of mink and thick carpets and championship golf courses and costs as much as a trip to Europe or California or Hong Kong or Israel, for that matter. What are they afraid of?

As Gift moves on, Allan namechecks colleagues and close friends in show business. The former are folks like he who started out writing gags for TV variety shows and moved on to bigger and better things (like author Max Wilk and the superb screenwriter-playwright George Axelrod). At one point he notes that an average dinner party guest list of his closest friends in the biz would include Everett Sloane, screenwriter Ernest Lehman (North by Northwest), Steve Allen, and Jim Backus. He also does crow at times — we learn that various superstars told him they liked his albums; among these were George Burns and Jack Benny (early supporters of his songs), as well Frank Sinatra, Sammy Davis Jr., and Jack Kennedy.

The sweetest salute to a celebrity who was both a fan and a friend of Allan’s comes at the book’s finale when he pays tribute to his next-door neighbor Harpo Marx (who, like Burns and Benny, had urged him to record his “party songs” and then promoted My Son the Folk Singer to everyone he knew). Sherman devotes the last chapter in the book to an account of two concerts that he did with Harpo (who apparently, from the text, opened for Allan).

He notes with chagrin (and a touch of anger) that Harpo’s name was left off the marquee, and so he had to threaten to walk off to ensure that Harpo received equal billing with him. He then goes on to talk about how Harpo decided that the second of the two shows would be his last-ever live performance.

Allan found it hard to tell the audience that they’d just seen Harpo’s farewell to performing, so the world-famous mime comedian came out and took over the microphone — and proceeded to give a long farewell speech, in which he reviewed most of his career (his opening line, according to the book, was “Now as I was about to say in 1907...”).

Thus, while Gift was reportedly ghosted by Maurice Zolotow, I found that it contains quite a large dose of emotion (and, sadly, depression) that clearly came from Allan himself. It’s currently well out of print, but worth reading if you’ve enjoyed Sherman’s albums and are curious about his life. (Note: I will indeed review Overweight Sensation at a future date.)
*****


I’ll close out with just a sample of the many Sherman songs that are floating around on YouTube. First, a wistful little love tune he wrote for his wife, performed here to a little girl (who seems perplexed by the lyrics — and quite rightly so).

Allan hosted a bunch of variety-show episodes (here he is with Herman’s Hermits). In honor of the fact that Halloween is coming up, thought, I present his one and only horror novelty 45, a little ditty called “My Son, the Vampire”:

As the title indicates, the show was meant to be funny (and is), but at the end Allan slips in one of his few serious tunes, the touching “His Own Little Island” (at 7:30 here) from the Broadway flop Let It Ride, as a sort of goodbye theme. The public was not much interested in Sherman as a serious singer-songwriter, but he was an incredibly talented man who, again, did have his sad side — from which, no doubt, his desire to make people laugh sprang.

At various points in Gift Allan supplies his personal philosophy: “Nothing is impossible!” Not a bad way to end any tribute to him.
Posted by Media Funhouse at 12:21 AM