"Not a just image, but just an image...": Deceased Artiste Raoul Coutard

Although his obits emphasized the fact that Raoul Coutard, who died in early November at age 92, pretty much stumbled into being a cinematographer — he thought he was being asked to take on-set stills for the film in question by his old friend Pierre Schoendoerffer — he wound up crafting some of the most beautiful images and kinetic camerawork in the films of the French New Wave and related filmmakers. He is best identified with Funhouse deity Jean-Luc Godard (aka Uncle Jean), who turned 86 last week. The pair collaborated on sixteen absolutely perfect films, all of which feature gorgeous and vibrant imagery.

Coutard was indeed a photo-journalist who had specialized in war photography (he lived for over a decade in Vietnam) before he entered the film world. His greatest claim to fame — and it is indeed a credit to be reckoned with — is that he innovated ways to shoot “on the fly” with JLG on A bout de souffle. His work with Godard is unassailable, as it is a building block of modern cinema.

He worked with other filmmakers as well on what were some of their best and most beautiful-looking films. He ran the gamut from pure verite to stylized fantasy, doing camerawork for both Jean Rouch and Edgar Morin’s landmark documentary Chronicle of a Summer (1961) and Jacques Demy’s lighter-than-air romance Lola (also ‘61).

Besides Godard, the filmmaker he most frequently collaborated with was Francois Truffaut (Godard’s best friend, and later nemesis). The quartet of films Coutard shot for Truffaut are among his very best. Shoot the Piano Player (1960) and Jules and Jim (1962) were trendsetting tragic romances. The Soft Skin (1964) features some of the most beautiful images in all of Truffaut’s filmography, and The Bride Wore Black (1968) is one of the finest-ever adaptations of noir-master Cornell Woolrich’s work.

Coutard had arguments with Truffaut over the last-mentioned film that ensured they never worked together again. Coutard claimed responsibility, saying he was trying to stop smoking during the shooting and that made him impossible to deal with.

Costa-Gavras has been making sharply political films for the last half-century. Two of his finest, and most successful, films were shot by Coutard, Z (1969) and The Confession (1970). The latter was quite controversial, as it showed the authoritarian excesses of the Soviet Union; it was therefore perceived incorrectly by reviewers as a right-wing film by an iconic left-wing filmmaker. The film is a haunting and memorable tale of unjust imprisonment.

Z is one of the all-time greatest political thrillers, an unforgettable mixture of plot, message, and characterization — made even better by Coutard’s camerawork and the music of Mikis Theodorakis.

Coutard kept working up until 2001. Unsurprisingly, the filmmaker who used his talents best in his later years was a “younger brother” of the French New Wave, namely Philippe Garrel. His The Birth of Love (1993) stars Sixties icons Jean-Pierre Leaud and Lou Castel, and perfectly captures the look and tone of the French New Wave.

Coutard’s first film as a director, Hoa Binh (1970), received good reviews, won the Best First Film prize at Cannes, and was up for the Best Foreign Film Oscar. The film offers a Vietnamese boy’s perspective on the Vietnam War. His third and last film as a director, S.A.S. Malko (1983), was unfortunately a tacky-looking action flick that went straight to video in most countries:

The only proper place to end this tribute is, of course, to discuss his sublime collaboration with Godard. Coutard was selected to shoot A bout de souffle (1960) because of his documentary background, and what he devised for Uncle Jean were several clever, innovative ways to “steal” shots on the streets of Paris. 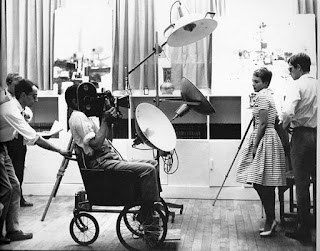 Aside from secreting the camera in a mail cart and shooting in (and from) moving cars, Coutard was, of course, the cameraman in the wheelchair (above) whom Godard pushed along the street to simulate a tracking shot.

From those gritty beginnings Godard and Coutard moved on to make some of the most perfect and sophisticated films of the decade, including Vivre Sa Vie (1962), Contempt (1963), Alphaville (1965), Two of Three Things I Know About Her… (1967), and Weekend (also ’67). In each case the film was excellent to begin with (as was the case with Masculin-Feminin, the only non-Coutard Godard feature of that era). But Coutard’s visuals, lighting, and work with colors (or stark b&w, as in Alphaville) made the films even more perfect.

My choice for the finest of all would be Pierrot Le Fou (1965), the “lovers on the run” drama-comedy-musical that covers so much territory in its 110 minutes that it seems like a summation and/or primer for those who are curious about Godard’s way of assembling a film, crafting characters, framing his actors, and exploring the themes that he’s still obsessed with today.

Godard’s films with other cinematographers are still marvelous, but there’s something very special about the rapport he had with Coutard. This is proven by the fact that the two best films Godard made in his Eighties “comeback” period were both shot by Coutard.

Passion (1982) is an exquisitely beautiful film that counterpoints activity in a factory with that in a nearby movie studio. Stars Hanna Schygulla, Michel Piccoli, and Isabelle Huppert all have some great moments, but the most gorgeous sequences are the ones in which we watch the film-within-a-film being shot.


As is usually the case in Godard’s films about artistic creation, the “interior” work is an unlikely prospect in which famous paintings are recreated as live-action tableaux vivants. What results are some stunningly beautiful images.

Godard's last film with Coutard is another masterpiece that serves as a good “portal” to Uncle Jean's work. First Name: Carmen (1983) is Godard's funny and bittersweet take on the Carmen story. In the Eighties Godard crystallized a visual style that found him frequently cutting to landscapes and the sky as punctuation to the actions of his characters. (He had started doing this in the Sixties but it has been used a lot more in his work in the last 35 years).

Coutard's contribution here is incalculable, as these shots are gorgeously composed and lit, adding a sense of inevitability to the doomed love affair that is at the core of the film. There are many moving sequences in the film (and many great comic ones), none more so than this beautiful image of impotence and lost love, set to Tom Waits' “Ruby's Arms.” 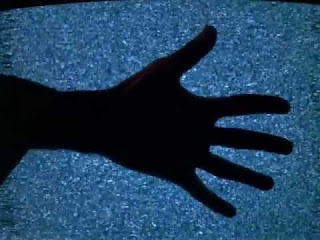 That sequence is only present in a small shard on YT (I'm not sure if that is because of copyright troubles involving the music, or "obscenity" troubles with the glorious nudity of Maruschka Detmers — America can’t deal with the human body…). One of the only clips found is this fragment from early in the film:

M. Coutard's beautiful images will most certainly live on well into the future. Here is his most famous sequence, from Contempt. He is, of course, the man behind the camera:

Posted by Media Funhouse at 1:11 AM