Before the year closes, I wanted to mention two particularly enjoyable moviegoing experiences I had. The first is chronicled in this piece. In the time since this event occurred in Cambridge, there was a celebration of the same film in L.A. with not only the director/star present, but also nearly all the living cast members (including one who is now a big movie star on his own, although his movies are dreadful). Since I live on the East Coast of the U.S., I’m happy that there was a Shakes celebration closer to home….

The majority of cult movies were, on their initial release, complete flops at the box office and trashed by critics. Such was the fate of Shakes the Clown (1991), Bobcat Goldthwait’s uncommonly dark, and at times downright nasty, first film as a director/writer/star. The film’s best review, by Betsy Sherman in The Boston Globe, took the right tongue-in-cheek approach and contained the priceless line dubbing it “the Citizen Kane of alcoholic clown movies.”

This year marks the 25th anniversary of the film, which, thanks to cable showings and the blessed medium of VHS (later DVD) now has a diehard cult of fans who appreciate its imaginative nastiness and terrific cast of then-fledgling comedians. Shakes received its due at a 25th anniversary celebration on Sept. 22 at the Brattle Theater in Cambridge, Mass. Bobcat was in attendance and the event reminded yrs truly of how grimly funny the film is, and how it definitely led the way to Goldthwait’s subsequent indie features.


Shakes was a very odd move for Bobcat, who was the better “screaming comedian of the Eighties.” (Bobcat’s was a comic persona, whereas Sam Kinison’s rage and jokes about minorities seemed way too real.) Bobcat’s onstage character was a nervous wreck who would shout out Tourette’s-like outbursts of non-sequitur humor. With Shakes he abandoned his strangulated standup voice and chose to play his character as a sarcastic, hopeless drunk in a surreal clowns-only version of show biz (with the much-loathed mime populace living on the fringe).

Bobcat spoke before and after the screening at the Brattle, and was quite open about the film’s box-office failure — it put him, he says, “in comedy jail” for several years afterwards, as his management (and audience) had hoped he’d make a vehicle picture for his onstage persona (he had played essentially the same character in three Police Academy movies).

The film remains rewatchable because of several random elements that stay in the memory, among them some wonderfully mean lines of dialogue and the sheer absurdity of a serious “drunk at the end of his rope” plot thread being situated in a world of colorful yet embittered clowns. The 35mm print shown at the Brattle had added “nostalgia value” since it was slightly scratchy (much better in this reviewer’s opinion than the spotless 4K restorations, which resemble high-def videos more than film).

The most interesting revelation that Bobcat was more than happy to share was that some of the funniest moments in the film were ad-libbed by the cast members. The performers in Shakes range from then-unknowns (Adam Sandler, Kathy Griffin, Tom Kenny) to Eighties comedy stars (Bobcat, Julie Brown, a pseudonymous Robin Williams) to old pros (LaWanda Page, Paul Dooley, Sydney Lassick, and a seemingly game-for-anything Florence Henderson). Bobcat maintained that he had a lot of surprises as he directed the film, since the lines the cast were coming up with were better than the ones in his script.

For example, perhaps my favorite line in the picture appears in this scene with LaWanda Page who, according to Bobcat, made up her own dialogue.

Indeed many fan favorite moments in Shakes were created on-set by the performers. Julie Brown gave her character a speech impediment. The two comics playing plainclothes detectives came up with the random weirdness their characters talk about (they’re my least-fave part of Shakes, but they do have some great lines, including a consideration of what the hell a “Shondell” might be — as in “Tommy James and the…”). Tom Kenny — best known these days known as the voice of Spongebob Squarepants — steals the film outright, though, as Binky, the cocaine-dealing party clown who is the film’s villain. Wearing makeup that Bobcat said was based on John Wayne Gacy’s clown facepaint, Kenny is creepy and funny as a character who seems like a hyper cousin of the Joker who happened to wander into the cranky world of Shakes.

Bobcat did the intro to the film by himself but invited a guest up for the Q&A after the film — his friend Tony V., a Boston standup who appears in Shakes as one of the nasty rodeo clowns (the film is indeed set in a world populated by different sorts of clowns). Tony agreed that Bobcat’s original script was very unlike what finally reached the screen. Which might explain the two strange sequences in which Shakes can suddenly fly (which must’ve been leftovers from the original script).


A question from an audience member about a scene in which Shakes juggles led to one of two great stories about the time that Bobcat and Tony spent on the road together, touring as standups. Tony was teaching Bobcat how to juggle, and an airport security guard detained them because of the juggling pins found in their luggage. The guard wanted to be reassured that the two weren’t terrorists, so he ordered them to juggle for him — which they did, entertaining the other passengers waiting to get through security.

The other story they told about airport security was an even more convoluted (and funnier) tale of a cop ingesting something that had been in Tony’s nether regions (he tasted it to see if it was cocaine). One got the impression that the two have been close friends for quite a while — Tony also has a role in Goldthwait’s World’s Greatest Dad (2009) — and their life on the road was filled with very weird events.

Here are the two pals appearing on the local TV show “Charlestown Live”:

But back to the film: Its cult status has been underscored by the fact that some of its lines of dialogue have shown up in other contexts. REM’s song “Binky the Doormat” (from the 1996 album “New Adventures in Hi-Fi”) was titled after one of Tom Kenny’s lines, and it was noted that an odd “code” phrase used in the film — “The dolphin is in the Jacuzzi.” — was used by certain dealers selling black-market Cuban cigars (!).

The most interesting story about unexpected publicity given to the film concerns the time Bobcat was invited onto The Today Show to promote the picture and was informed that he was going to have to debate a clown — his answer to that, he informed us, was “I know the deal… I’ve seen your show…”

But it was a real clown he had to debate, an angry representative of the clown community who felt that Shakes was adversely affecting the image of clowns around America. This entire event being red meat to a polished standup comic, Bobcat then had to remark that the clown seemed to lack a sense of humor. We were informed by the very proud Goldthwait, that derider of clowns, that Katie Couric enshrined this ridiculous segment as her worst-ever interview in her memoir.

Clearly Bobcat is still very proud of his debut as a filmmaker, but he did note — having watched it again, sitting amongst the cultists — that the film is poorly edited at points and he wished he could re-edit certain sequences, including a car chase in which he had noticed that the car being chased was behind the pursuers.

Although Shakes is indeed the broadest comedy Bobcat has yet made a screenwriter-director, it definitely paved the way for his later indie features, each of which could easily be described as “dark” (or grim, depending on the sequence and the picture). Unlike Paul Feig or (god forbid) Dennis Dugan, Goldthwait is a “comedy filmmaker” who has made a different sort of film each time out of the box and has avoided the “kooky” formulas that rule American movie comedies.

His next two features after Shakes, Sleeping Dogs Lie (2006) and the Robin Williams-starrer World’s Greatest Dad, were comedies that blended dark humor with surprisingly moving messages about honesty. The first film indicates that too much honesty can wreck intimate relationships; the second conveys the message that too many lies, even ones that “mean well,” can wreck your whole life.

Both films are very funny and very smart — this last aspect shouldn’t be a surprise, but in a landscape filled with incredibly bad, cookie-cutter American comedies (most of them vehicle pictures for ex-SNL cast members), it is indeed rare.

The most encouraging thing for those of us who’ve been following Goldthwait from the time he was the “screaming comedian” on late night talk shows, was that he left behind comedy in his last two indie features. The first, Willow Creek (2013), is a found footage thriller (along the lines of The Blair Witch Project) that had satiric aspects in a few scenes — about odd “Bigfoot” merchandising — but is primarily a low-key horror flick. Call Me Lucky (2015) was entirely different, as it’s a documentary portrait of comedian Barry Crimmins, which explores his hard-edged left-wing comedy, his mentoring of younger comedians (including Goldthwait), and the sexual abuse he suffered as a child that has haunted his adult life.

So while Louis C.K. has been getting much attention (and rightly so) for making tragicomedies that are unlike mainstream comedies, Goldthwait has also continued to carve out a very unique niche for himself, without casting himself in the lead (or even supporting) roles of his films. The sharpest and nastiest satire he’s made, God Bless America (2011), is an incredible time capsule that is both very funny in its mean (but entirely accurate) depiction of America’s love of lowest-common-denominator culture and sympathetic in its depiction of two “normal” souls (a middle-aged man, played by Joel Murray, and a teen, played by Tara Lynne Barr) who get fed up with the mediocrity that surrounds us.

If the film consisted of this one scene alone, it would already be a significant work:


As for the fact that he chooses not to act in the films he’s made since Shakes, Goldthwait explained this in the Brattle Q&A when he noted that both Robin Williams and Joel Murray said to him at one point in their respective shoots, “I get it… I’m playing you…”

After the Q&A was finished Bobcat hung around the Brattle to talk with audience members and take pictures. When I asked what his next film would be, he spoke with enthusiasm (and a characteristic note of self-deprecation) about a new series he is making for the TruTV network, to be called Bobcat Goldthwait’s Messed Up Stories. If the series is anything like his films, it will be delightfully unpredictable (the key virtue in the Funhouse philosophy). All he would say is that it will be his very own Twilight Zone and will be (no surprise) “dark.”

And while I rarely would ever bug a celeb to take a picture with him/her, Bobcat was hanging out with the fans afterward. Thus this image of myself and the man, shot by my friend Paul G. 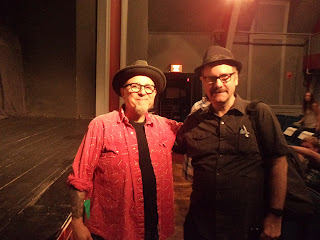 I look forward to seeing what he comes up with — any man who starts his filmmaking career with an antisocial act of provocation like Shakes deserves our attention.
Posted by Media Funhouse at 5:06 PM