The recent death of Harold Ramis brought back memories of his great work as both a performer and head writer on the first season of SCTV. His output as a movie director was wildly uneven (I’m being kind here). I'm of the right age demographic to be hailing Ramis for, as the writer of one insanely hyperbolic piece on Gawker contended, being the man who “wrote and/or directed the greatest American movies of my generation.”

That isn't the case, though – Ramis's comedies are pleasant on first viewing (especially if you're a teenager or younger), but there is little to no reason to revisit them (Groundhog Day excepted), unless you're looking for a trip down Memory Lane. It's true that Ramis crafted the Bill Murray movie persona that everyone knows and loves, but the films just don't stand up to repeated viewings.

Yes, there's a line or two here, a situation there, but Meatballs, Caddyshack, Stripes, and the Ghostbusters duo (why is anyone at all, ever, even considering a third installment?) ain't The Producers (the original, not the appalling musical revamp). Ramis' later films were pure formula, from Analyze This and Analyze That to the godawful remake of Bedazzled (written by former Caesar writer Larry Gelbart!) to that goddamned Jack Black caveman comedy (his last feature film).

A piece on time.com says that Ramis is responsible for the fact that modern vehicle comedies include space for the performers to improvise – is that so? The writer apparently neglected to remember that he scripted most of the “influential” comedies and didn't direct them. Of the ones he did direct, perhaps only Caddyshack adheres to the Time writer's Platonic ideal of Ramis as the Paul Sills of cinema. 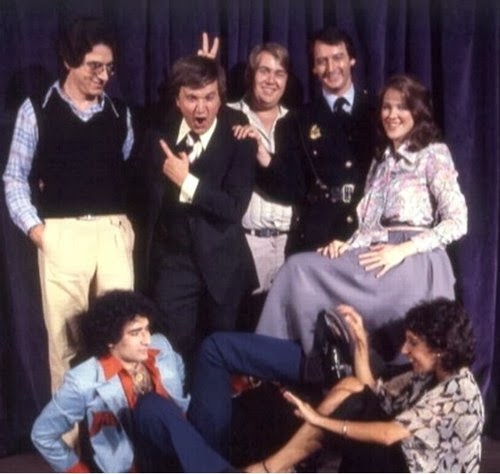 So let's return to the good stuff bearing Ramis's name, why don't we? As a young upstart, fresh from the superbly nasty National Lampoon Radio Hour, he was truly terrific on the first year of SCTV. He wasn’t able to do perfect celebrity impressions like his castmates — in fact he looked pretty much the same in every sketch he was in. He did, however share their ability to write and craft sublimely cartoonlike characters – as with the perpetually sweating station manager Moe Green, guru “Swami Banananda” aka Dennis Peterson, and “Officer Friendly.”

Sadly, the Shout! Factory SCTV DVD releases never included the first year of the show. At that point the series had a truly miniscule budget, but the writing was wonderful, and the performer-writers were discovering their strengths as satirists of TV.

The Shout! collections unfortunately ended with the season many SCTV fans would say was its absolute worst — the season that introduced Tony Rosato, Robin Duke, and Rick Moranis. I assume that Shout! issued this season (as SCTV — Best of the Early Years) because of the inclusion of Moranis. In the meantime the early years with and without Ramis are “MIA,” as is the odd final season that aired on Cinemax.

Segments from the show’s first season are available online, and I have chosen four great bits featuring Ramis. The first reflects his National Lampoon background — a grim little mock-PSA that features the seven “warning signs” of death. The show’s odd, intentionally weird laugh track was in full effect in the early days:


The second is an equally grim bit starring Ramis as “Officer Friendly,” an abusive cop who doubles as a kiddie show host.

Ramis' most notable SCTV character was the always-nervous station manager Moe Green. Here is the episode in which a wonderfully ridiculous parody of Ben-Hur is bracketed by Moe Green hosting “Dialing for Dollars”:


And the piece de resistance, a truly bizarre bit of business called “Muley’s Roundhouse.” This is a spinoff from a Grapes of Wrath parody (“The Grapes of Mud”) that aired on the same episode.

Here a supporting character from Wrath, a “tetched” neighbor of the Joad family (played by John Qualen in John Ford’s 1940 film) is the host of a children's show. Qualen's character is quirky, as seen here, but Ramis' interpretation paints him as a blissfully cranky loon who dotes on words with the letter “b” in 'em. This is Ramis at his best, and weirdest, as a performer. [The character comes back after the "Three Dummies" short with Flaherty, Levy, and Candy; ignore the "host" of this vid, he's gone pretty quickly.]

Posted by Media Funhouse at 1:06 AM