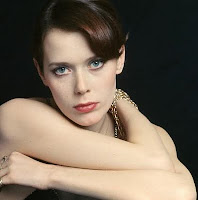 Sylvia Kristel’s death last week at the relatively young age of 60 as a result of complications from a long battle with lung cancer brought back memories to many of us of her mid-Seventies heyday as the softcore sex queen. An extremely attractive, but refreshingly not “bodacious,” presence, she was genuinely sexy, and although she lamented in later years that her acting career had never gone quite where she wanted it to, her triumph was always in exuding sensuality without seeming either phony or forced.

Dutch by nationality but always mistaken for French because of her best-known film work, Kristel had been a secretary and a beauty contest winner before she took the plunge and starred in Just Jaeckin’s landmark softcore feature Emmanuelle in 1974. 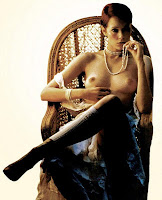 Shortly after her “Emmanuelle” fame, Kristel was cast by two auteurs (Chabrol and Robbe-Grillet, more on this below), but the majority of the films she worked in in both French and English were either “Euro chic” (read: safe for couples) softcore — Lady Chatterly’s Lover 1981), Mata Hari (1985) — or lame, leering American sex comedies, the biggest hit being Private Lessons (1981). One of her weirder assignments was a supporting role in the really horrible Get Smart feature The Nude Bomb (1980).

She later discussed in her autobiography Undressing Emmanuelle the highs and lows that movie stardom conferred upon her in the late Seventies and early Eighties. She dated gents like Vadim, Depardieu, and Beatty as she made the move from France to L.A. She also cultivated a cocaine habit, had trouble with alcohol, and entered various relationships looking for a “father figure.” The most salient quote she provided for this period comes from her autobio: “sooner or later the debt must be paid... women are charged a great deal for having been beautiful, unfairly different, attractive, for provoking unsatisfied desire.” 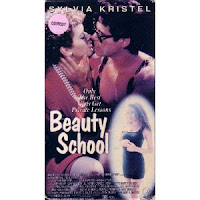 She remained a very good-looking woman up until her death, but those of us who continued to watch her movies throught the Eighties and Nineites were well aware that she was that was making horrible choices in both her life and her career — especially when you see her in absolute L.A.-made straight-to-video crap like Beauty School (1993). The film was clearly made to be funny but, as the trailer indicates, it’s just fuckin’ awful.

Her rather wild lifestyle did begin to make her look slightly older onscreen — especially when she suddenly appeared with curly hair, dyed red, in no-budget potboilers. I did actually pay to see the first few Emmanuelle sequels in theaters and, as is true of every series, they got worse as they went along.

Emmanuelle: The Joys of a Woman (a much better title than the original “Emmanuelle 2”) led to Goodbye, Emmanuelle, which was just absolutely awful. The only thing I remembered about the film was its very catchy theme song. Years later I discovered that the song had been written by Serge Gainsbourg and performed by Serge and Jane Birkin. This is definitely the best thing about the third installment:


Kristel still looked very good in 1984, but the time had come, apparently, to find a newer Emmanuelle. Instead of simply replacing her outright, it seemed that the producers wanted to publicly humiliate her by having her appear in the dreadful Emmanuelle 4 as a woman named Sylvia who flees her boyfriend by going to Brazil and getting “extensive plastic surgery” (so sez the Wiki for the film; I seem to remember her entering some kind of chamber or something). 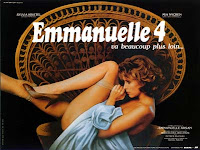 When she emerges with her new (younger, natch) face, she is “Emmanuelle,” played by the actress Mia Nyrgren. I was embarrassed for Kristel when I saw the picture (which was shot to be shown in 3D and had “explicit” scenes included in its European and VHS versions).

Little did I know that she reprised her most famous role again, several times, in a made-for-cable series of films made in 1993-94, in which she was actually billed as “Old Emmanuelle” — the sex scenes were undertaken by an actress playing the younger Emmanuelle (and one of the costars was the one-time-only Bond, George Lazenby). I should note that when she did Emmanuelle 4 she was 32, and when she was “Old Emmanuelle” she was exactly 41.

Therefore, it makes perfect sense that Sylvia went back to the Netherlands and continued to work as an actress in less racy material. She was an avid painter and directed a short cartoon in 2004 about the ways in which her mentor, artist Roland Topor, changed her life (you can see two minutes of the cartoon on her IMDB page).

I found many wonderful video tributes to Sylvia online, including this one (scored to Serge and Jane). The gentleman who runs the Sylvia Kristel fans blogspot has let us hear the lady speak for herself, with uploads of interview footage from the extras on the Emmanuelle DVDs:


The first Emmanuelle was the sexiest film she was ever in, but it was one of two films she was in that did phenomenally over here. The other one was the coyly sleazy Private Lessons. Here is the famous scene where she undresses to excite a young boy, carefully edited of course to remove any nudity (YouTube is an American-owned company, and as such can't deal with the sight of the human body).

It's a really goofy scene, with dippy music, but Sylvia does look wonderful, and I have the uncanny feeling that no film like this could be made in the American mainstream anymore, since we've gotten to be an even more Puritanical society in this, the age of the Internet:


Sylvia had a good singing voice and performed the theme from Emmanuelle 2, “L'Amour d'Aimer” by Francis Lai. Here's a great 1976 clip of her singing “La Chanson d'Emmanuelle.”

The best musical number I found by her on the Net was this nice bossa nova tune, “Changes,” performed by Sylvia with the Eddy De Clercq Quartet:

I decided to close out this tribute with three clips that I couldn't find anywhere online, so I uploaded them myself. The first is her entire appearance from the Alain Robbe-Grillet film Le Jeu Avec Le Feu (aka “Playing with Fire,” 1975).(Thanks much to Paul G.)

Robbe-Grillet's films are odd affairs that use the cyclical, open-ended construction of his nouveau roman novels, but they also have several sequences in which women are seen tied up. In this instance Sylvia is the victim and, although she looks lovely, she is shamelessly thrown in and then tossed out of the picture. NOTE: The English subtitles for this film make no sense, but that shouldn't affect your viewing experience.

The second film represents her most notable starring turn for an “auteur,” Claude Chabrol's Alice ou la derniere fugue (1977). The film is intriguing and downright bizarre at times, but is mostly notable for being the only adaptation of Lewis Carroll in which Alice is alone for long periods of time and only encounters a small handful of not-so-colorful characters! (But yes, she is naked here, so the clip briefly becomes NFSW).

And finally, my favorite moment from the “lower end” of Sylvia's career, her attack on Linda Blair at the end of the women-in-prison pic Red Heat (1985). The film is ridiculous, but wonderfully so at times. The scene that ends this montage is one of those times.


Sylvia Kristel DA by moreclipsplease
Posted by Media Funhouse at 12:50 AM