Since I’ve discussed what was utterly misguided on The Andy Williams Show — but is compellingly watchable in many instances as Sixties TV kitsch — I have to talk about what did work wonderfully. The show’s best element was the many duos and trios that Andy did with singers who were of his “generation” (and older). As a quick fer-instance, he did two incredibly smooth duets with Brazilian singers, “The Girl from Ipanema” with Antonio Carlos Jobim, and the less-often-heard but equally beautiful “Samba de Verao” (Summer Song) with Marcos Valle:

Given his background as a “boy singer” backing up Kay Thompson, it makes perfect sense that he dueted well with female singers, and that he did with Peggy Lee and the one and only Lady Ella. His duet with Aretha Franklin doesn’t hit the right note, to the point that Andy has to make fun of how un-soulful he is (to see a white variety-show host keep up with Aretha, check out Tom Jones’s wonderful duet with her).
One of my favorite under-appreciated performers was singer-songwriter Roger Miller, who came up with a string of great fast-paced, humorous country singles in the Sixties (and the timeless “King of the Road”). Andy and he dueted on “In the Summertime (You Don’t Want My Love).” Roger handles the humor on that one (replete with eefin’ action!).

More appropriate for Andy are the times he sang opposite other male singers, including the leagues of great male lounge-MOR performers of the Sixties. Like all the other middle-aged balladeers, he had the opportunity to work with the guy who influenced them all, Bing Crosby. He also did a spirited duet with the eternally smooth Tony Bennett on “This Could Be the Start of Something Big” (written by his former mentor Steve Allen, and performed here with the Count Basie band).
The most energetic numbers Andy performed are the show were always in the company of two other male singers (shades of his work with his brothers?). This set-up happened frequently on the show, usually with Bobby Darin in the trio. This occurred with Tony Martin and Eddie Fisher as the third side of the triangle. The oddest combo has got to be Darin and the always-amazing Anthony Newley (who has “long hair” for a 1966 variety show). Both Bobby and Tony seem to be into goofin’ around:
Also of note to me (and Funhouse folk who love this guy’s ultra-lounge-iness) is Andy’s warbling with the always amazin’ Buddy Greco. Trini Lopez is the third side in this instance, doing the full version of “America” (which seems rather odd out of context):
Sammy Davis Jr. was a ubiquitous presence on variety shows, and never, ever gave a less than energetic performance. Here he joins Andy to sing “Breezin’ Along with the Breeze”:
And of course, Funhouse viewers know I am fixated by the comedian everyone hates to love and loves to hate, the one and only Jerry Lewis. The most interesting exchange here occurs when Jerry is shouting his lines as usual, and Andy notes, “I’m not used to being yelled at.” Jer’s reply? “That’s how I lost my partner…”
*****
Leaving behind Williams’ variety show, I move back to his recording career and must point out the fact that, after a certain point in time, it seemed like Williams was always singing instrumentals. Perfoming what sounded like a hastily-lyricized vocal version of an instrumental was a staple of most singers’ repertoire at that time, but it did seem like Andy did a LOT of those prefabricated tunes. The MOR station my family listened to during the day, WNEW-AM, was constantly debuting Williams doing a vocal version of a popular instrumental, usually a movie theme. 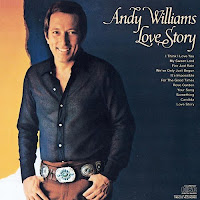 Thus, Andy could be heard warbling “the Exodus theme,” “A Summer Place,” “Charade,” “More,” his big hit “The Days of Wine and Roses, “A Time for Us,” and the very, very smarmy “Love Story theme.” Probably the last in the decade-plus series of movie themes sung by Andy was the Godfather theme, “Speak Softly Love.” A great movie theme, but a rather lame song (sorry, Al Martino).
One of the sorriest excuses for a lyric has got to be the set of verses written to be sung to the “Love Theme” originally recorded and brought to No. 1 in 1974 by the Love Unlimited Orchestra, a Barry White project. I remember thinking even as a child that it was a pretty sorry excuse for a song – and little did I know there was a disco remix of Andy's version:
The single best adaptation of an instrumental ever sung by Williams was most definitely “Music To Watch Girl By,” which is emblematic of the MOR Sixties in ways I can't even describe. Feast:
******
Like a lot of MOR singers, Williams covered a whole bunch of contemporary songs in order to find a new hit or fill up his albums (most likely both). Many of the songs weren't right for his musical style, but that makes them all the more fun to listen to now.
For a long time it was rumored that the version of “Aquarius” from Hair sung by Andy and the Osmond Brothers was left on the moon by Neil Armstrong as a strange souvenir of planet Earth. This story is debunked in this article on the Check the Evidence site. However, the recording still remains a wonderful relic of the time that “old” met “new” and the result was wonderfully cheesy:
Andy recorded a lot of songs that seem really fucking odd when heard in his echo-y silken style. Among them is the Classics IV hit “Spooky”:
After his variety show left the air, Williams continued to appear on network TV. Some of those appearances made sense (as with the homepsun Xmas specials). And some were very, very strange, as when he sang Randy Newman's “Short People” with singer-songwriter Paul Williams:
****
I started this tribute out by noting that there are some Andy Williams songs that make me cringe (“The Most Wonderful Time of the Year”) and others that I never tire of listening to. The two that dwarf all others in the latter category (standing tall beside “Music to Watch Girls By”) are his catchiest pop singles.
The first is “Can't Get Used to Losing You” (1963), written by Doc Pomus and Mort Shuman. Covered wonderfully by the English Beat in 1980 (with an echo-ridden sound that seems to duplicate Williams' original, with a great ska backbeat), the song is one of the catchiest and best things Williams ever sang:
And finally, the Williams record that is surely his best-ever serving of “pure pop for now people” (thanks, Nick). It's upbeat, fully orchestrated, and uses Andy's self-generated echo chamber to best advantage. Danny Boyle used it brilliantly in a mocking sense as the end theme for his 1994 dog-eat-dog thriller Shallow Grave (watch it here, but you spoiler-shy cowards may not want to partake before seeing the whole flick).
The song remains a pure delight and a kick-ass bit of an AM radio timewarp :

Posted by Media Funhouse at 1:23 AM