An echo chamber in his larynx: Deceased Artiste Andy Williams (part one of two) 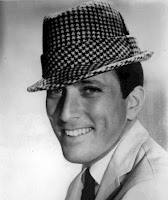 I've mentioned Andy Williams on this blog before in different contexts. I have a conflict about Andy's mega-mellow, super-easy-listening sounds. On the one hand, certain songs of his (one in particular!) make me cringe; on the other, I could listen to certain of his MOR hits over and over again and never get tired of them. It's all related of course to my chronological “relation” to his music (read: I heard it as a kid, and that music never ceases to have a primal pull on ya). I'll cover both “sides” of the Williams phenomenon, as well as spotlight some of the wonderful clips from his variety show, in this post.
First, for a little context. Much was made about Williams being one of the last “crooners.” Well, he definitely fit in that smooth-as-silk style, but I've always felt that the thing that distinguished him was the fact that his voice sounded like it was emerging from an echo chamber even when he was singing acapella. He was thus perfect for the MOR “sound” on unamplified, impure, and often crackly AM radio, and also on the non-stereo TVs folks had before the Eighties.
So who was this latter-day crooner who never, ever embraced that noisy rock and roll stuff? (Although he experimented with a LOT of pop-rock, as we shall see.) He was born in 1927 in Iowa, attended HS in Cincinatti, and then finally made it to L.A., He and his three siblings quickly landed movie and record gigs (including singing background on Bing Crosby's “Swinging on a Star”) as the Williams Brothers.

He was mentored by the actress-author Kay Thompson, who took a personal interest in him when he and his brothers broke up the act (Thompson and Williams had an affair when she was 38, he was 19). She did enough finagling to get him a lot of important gigs, including the one that broke him for real, his stint as the “boy singer” on Steve Allen's Tonight Show (the other boy singer was Steve Lawrence, who now stands along with Tony Bennett as the very last of a certain kind of male balladeer).
I knew none of this when I saw Williams on TV. I viewed him merely as the host of a number of programs — first a variety series (which ran nine years, from '62-'71), then a number of homespun, family-deified Xmas specials. As a TV host, Williams was slightly hipper (definitely younger) than Perry Como, but his mellowness didn't exactly make him a natural comedian (as Crosby could be when he was with Hope, and as Dean Martin always could be — Sinatra, btw, pretty meager comedian...). 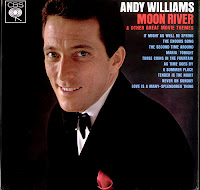 Andy was a devout “square” in an era when rock and roll became common currency. In going through his credits, I was surprised to find that “Moon River,” thought to be his biggest hit, was never a single at the time it was released (1962, after he sang it at the Oscars; Jerry Butler actually had the single hit with the vocal version of the song). He did, however, reach No. 4 on the charts with the pop tune “Butterfly,” which is in the mode of Guy Mitchell's “Singing the Blues.”
To get a serious dose of some pop-rock Andy Williams kitsch, I HEAVILY recommend this sucker, a cha-cha number originally sung by Earl Grant and released by Andy in '58. It will blow your mind, daddio... (it's also catchy as fuck)
But what did I know about this stuff when I was a little kid? I think the thing I enjoyed the most about his show (but also puzzled over) was a bear that wanted cookies all the time (yes, there was an overlap with Sesame Street).
There are two actors listed as being in the bear suit on the show in the IMDB listing, the most prominent being the “furry emeritus” Janos Prohaska. I'm not sure which actor is in the suit in this clip, which also features American instituion (and non-red-hot-mama) Kate Smith:
*****
Williams became inextricably linked in the minds of a lot of Americans with Christmas — and in fact his music is played on mainstream radio *only* at that time of the year these days (but that is because American radio is a sad cadaver that only digs out old music when the Yuletide season comes around). This is where I'll bring in the cringing I sometimes do when confronted with Williams' music.
His Xmas shows were indeed so homespun they could make ya choke, and they definitely overplayed the Currier and Ives adorable Americana aspect. For example, here, with a nice fake blue-screen (it was blue-screen back then) is Andy taking a sleigh ride with his singers. 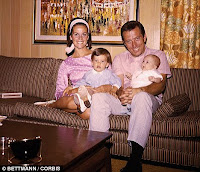 And then of course there's his many fireside moments with his then-wife Claudine Longet — the two continued to appear together on the later Xmas specials, even though the public knew they were divorced in real life (admittedly, it was less unctuous and pathetic than Sonny and Cher when they returned to the air to argue as a divorced couple in the mid-Seventies).
Longet, who is still alive, is most infamous for having shot her lover Vladimir “Spider” Sabich. Her claim was that the gun accidentally discharged into him when he was showing her how it worked — this was countered by evidence that noted that he was across the room from her and turned away at the time of the shot. 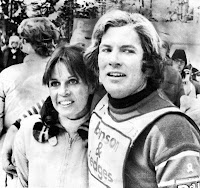 Also, there was a diary she kept in which she documented how the relationship wasn't going well — and thus, in one of those nice quirky twists of justice, she served 30 days in prison and paid a fine (she also got to choose which 30 days she spent, they were not consecutive). How extreme!
Anyway, what the Williams clan showed each Xmas was a united front — Andy and his brothers would reunite, Claudine and the kids would be together with him, and as many other relatives and guest stars as could be crammed onto the roster would appear in one cozy-home setting. But there was also THAT SONG...
Written for Williams' 1963 Xmas LP by Edward Pola and George Wyle (who was the vocal director for Williams' TV show), "It's the Most Wonderful Time of the Year" caught on in the years that followed, thanks to Andy performing it every year on his show, and the fact that it is the single most lying-est goddamned Xmas song ever. 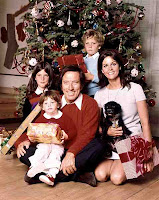 Think about it. “White Christmas,” “Blue Christmas,” “Have Yourself a Merry Little Christmas,” “The Christmas Waltz” — most of the modern Xmas songs are pretty down-hearted, but Andy's tune is a celebration of everything that exists purely in holiday-fantasy-land.
It's a catchy, hooky, upbeat Xmas nightmare and it literally HAUNTS the fuck out of all of us each Yuletide. It is a Christmas ritual, and these days I know that shopkeepers have decided the Xmas season is ON (usually the day after Halloween) when I hear this song coming out over a supermarket or convenience store speaker system. Abandon hope, all ye who hear Andy's merry declaration:
*****
The Andy Williams Show was yet another of the mind-bogglingly odd and amorphous variety shows in the Sixties that mixed the “old” and the “new” in stranger and stranger ways. As the “youth revolution” of the time was going on, these shows hugged tightly to the old, familiar ways of show biz.
Let's put it this way — Johnny Cash was perhaps the smartest of all the singers who hosted a variety show when he contracted to appear in no comedy sketches. Aside from Dean Martin (whose sketches ran the gamut from amusing to dowrnight godawful), the singers who hosted variety shows were not good comedians, and their writing staffs were mandated to write family-friendly comedy that was, to be kind, mediocre.
I submit as evidence this clip from The Andy Williams Show that begins with an awesome bit of Jonathan Winters ad-libbing with Andy, but then swiftly degenerates into a terrible sketch about a no-budget local TV station featuring Winters, Ozzie and Harriet, and Karen Carpenter (on drums!). The frame from Jonathan is great, the sketch is just unbelievable:
The clash of the “new” and the “old” was never as jarring and entertaining as it was in this appearance by Bette Davis, who sings a specially-written song to promote Baby Jane (it's a fucking twisting song!). Given that the film is a totally brilliantly deranged horror film/character study, this bit of odd promotion becomes even odder:
And what better to follow that than Miss Davis with the New Christy Minstrels and Andy singing “Michael, Row Your Boat Ashore.” Variety shows were wildly unpredictable at times:
Andy was indeed awful at comedy, but he did have some good comedians on his show. The only problem was that, for some reason, his producers thought it wise that he stay on the stage with them as sort of a straight man or a talk-show type inquisitor. He stays onstage for the opening of this appearance by Vaughn Meader, and is a wholly unnecessary interlocutor for a young Woody Allen:
This “why is Andy on the stage with these people?” factor also comes up when one watches him singing along with the younger musical acts of the Sixties. His becoming a fourth member of Peter, Paul and Mary kind of works, but him insinuating himself into Simon and Garfunkel is oh-so-pointless.
Add to that his odd musical number with the Carpenters, a rather clunky rewrite of the Beatles “Ticket to Ride” in the first-person plural (“We've got a ticket to ride, and we don't care...”). And what can be said about Andy becoming a part of the Ike and Tina Turner Review, doing a duet with Tina?
One of the cases where Andy was included in a rousing closer number is fascinating, in that he's not completely unnecessary, he's just the “lowest voice” on stage that serves to lead to the louder singers assembled around him: Mama Cass, a young Elton John, and Ray Charles. The last-mentioned duo play piano on the pop-gospel number “Heaven Help Us All”:
Thankfully, the Williams show featured younger performers on their own before they were forcibly detained with Andy. There are memorable turns online by Elton John, The Jackson 5, and Andy's label mates, the utterly awesome Sly and the Family Stone:

Further proof of the wondrous weirdness that was the Sixties is this terrific turn by Tiny Tim singing “I’m a Lonely Little Teardrop":