I don’t like watching movies on a computer, and will do so only when the film in question is extremely rare and can’t be found in another format. However, I am in the minority these days, because everyone loves to watch feature-length films on laptops or portable devices that can’t possibly do honor to the visuals of the greatest filmmakers (although the same devices are terrific for TV series, which are predominantly radio shows decked out with stylish-looking visuals that rarely, if ever, have a place in the storytelling).

I used to regularly chronicle on this blog favorite YouTube posters who have made available very rare material or entire films. Since in just about every case, these are fan-generated accounts and the notion of c*pyr*ght comes into play, I figure I should point these accounts out, before the files go down. In this entry I’ll discuss two such accounts, which I discovered while doing research into Ken Russell.

The first poster, lilacwine85, has put up a very nice selection of clips and features representing the “high” end of the artistic spectrum. Mikhail Kaufman (aka the “real Man with a Movie Camera” who shot his brother “Dziga Vertov”’s masterpieces) sumptuously visual In Spring (1931) can be found here:

As for Unkle Ken, two of his early short TV documentaries are up in their entirety. His vibrant 1960 portrait of the Taste of Honey playwright Shelagh Delaney (who died in November of last year) for the series Monitor, “Shelagh Delaney’s Salford”:

And his 1960 telefilm about the inhabitants of a London house where he used to live, “A House in Bayswater”:

Poster lilacwine85 has put up some lovely things (check out the shorter clips too), but the person whose uploads surprised the hell out of me is KingRabbit. The surprise came not only from the fact that this person has great taste in movies and uploaded the films as one long file each, but also because his/her uploads have now been up now for months, meaning the Russell postings were uploaded before “Unkle Ken” departed this mortal coil.

Perhaps they have stayed up because the copies of the films posted have French subtitles. This is no problem, though, as the majority of King Rabbit’s uploaded films are in English, so the subtitles are just a function of where the poster lives (I’m going to take a rather obvious leap here and say either it’s France or Quebec).

I am not one to advocate the blatant disregard of copyright — I’ll allow our hero, ”Uncle Jean” to do that for me — but if you’re interested in saving files from YT, you should already be well aware of savevid.com and keepvid.com.

And so, with that helpful hint in mind, I introduce you to “le stash” of King Rabbit, beginning with Frank Zappa’s extremely trippy experiment in mindfucking a cinema audience with odd lyrics, surreal happenings, and state-of-the-art (circa 1971) video fx. Me, I prefer Baby Snakes because it was my lengthy intro to Zappa-dom, but many fans from the earlier days prefer 200 Motels:

I am a devoted disciple of the work of Robert Altman, and thus would say if you haven’t seen his landmark film Nashville (1975), you’ve missed out on one of his most intricate and entertaining creations. Please see it on a movie screen first, but if you need a refresher course, it’s here:

As for the aforementioned “Unkle Ken” (that being his own spelling of “uncle” for his Facebook account), one of his best-remembered classical composer portraits is Song of Summer: Frederick Delius (1968):

One of his more flamboyant and engrossing composer biopics is The Music Lovers (1970). In re-watching his work to assemble recent Funhouse episodes, I was interested that, while he is best known for his composer-bios, he only made three of these for theatrical release. Mahler is probably the most intense, but the most kaleidoscopic is this portrait of Tchaikovsky:

The film that followed Music Lovers is indeed his masterpiece, The Devils (1971). King Rabbit has posted the version that has been released in France on DVD, and will soon be out in the UK on disc. It is missing the recently discovered seminal scene (which runs for over five minutes) called “The Rape of the Christ,” but it is still a potent and pointed statement about religious hypocrisy, and one of his finest stylized works:

Russell’s own personal favorite of all of his films was Savage Messiah (1972), because he felt a great kinship with the sculptor Henri Gaudier-Brzeska and made his biography of the man a paean to the dedicated work (and attendant creative genius) of an artist:

Currently out of print in the U.S., Russell’s Salome’s Last Dance (1988) is a wonderfully weird rendition (read: dream) on Oscar Wilde’s play. It is sexy, it is strange, and it does have something to say about sexual politics. Catch it here:

King Rabbit has also put up films at a different address. Among his postings is Mizoguchi’s 1929 short “Tokyo March”:

Readers of this blog will know of my undying fondness for Vincent Price. KR has also posted a wonderful TV special he did in 1972, wherein he recites the work of Edgar Allan Poe:

Paul Morrissey made the Warhol films watchable, and one of his first films that was independent of Andy (aside from its title) was Andy Warhol’s Flesh (1968):

I reviewed the new Criterion release The Films of Jean Vigo a few months ago on the Funhouse TV show. Vigo’s classic Zero for Conduct (1933) was the inspiration for Lindsay Anderson’s youth revolution classic If…. (1968):

Given the fact that YouTube is now the home of the music video (so much for “music television”…), it makes perfect sense that Yellow Submarine (1968) should be present. It was a Beatles side-project that the band itself gave little attention to (besides the creation of four songs, and a three-minute live-action sequence), but the animators involved, led by Heinz Edelmann, did some exquisite work:

I feel that if a “literary” film can draw you back to reading, it has achieved its goal. Paul Schrader’s brilliant Mishima: A Life in Four Chapters (1985) covers a lot of ground, and caused me upon first viewing to get to the library and start reading Yukio Mishima’s gorgeous (and gorgeously tortured) prose. It is a brilliant film:

I like using Andrew Sarris’s phrase “a subject for further research,” and for me one of those subjects is the amazing Swedish filmmaker Roy Andersson. I have Songs from the Second Floor (2000) and have been meaning to watch it for months. I will do so soon, but in the meantime…. (Note: French, not English subs.) 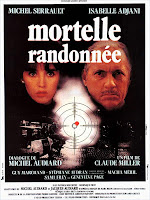 To show the rapid nature of the sharing that goes on these days, as I was checking this piece to upload it, I found that King Rabbit has struck again, putting up several more movies in their entirety, including the critically-favored Thai film Citizen Dog (2006) (with French subs), the Jodie Foster/Martin Sheen thriller The Little Girl Who Lives Down the Lane (1976), the terrific period piece Cooley High (1975), and the French thriller (note: without English subs) Mortelle Randonée (1983).

The new title that came to my attention instantly, due to my love for the work of Aki Kaurismaki, was La Vie de Bohème (1992). The film is Kaurismaki’s deadpan, non-musical adaptation of the novel Scènes de la vie de Bohème, starring the finest AK actor, the late Matti Pellonpää, and featuring a supporting turn by Jean-Pierre Leaud:

Posted by Media Funhouse at 5:58 PM