A "nurse" to the end: Deceased Artiste Zina Bethune

A death was announced this week that was very sad in its particulars, yet quite invigorating as a story of survival and reinvention in show business. The death was that of dancer-actress Zina Bethune who, to most reading this blog, will be best remembered for being the female lead in Scorsese’s first feature Who’s That Knocking at My Door? (1967). She was a doe-eyed blonde actress (and that phrase was very appropriate for her) who was quite good in Knocking, but who had become, as far as many of us were concerned, a “whatever happened to…?” figure. 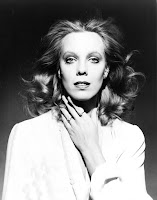 Her death was tragic enough to be reported on gossip blogs (by the likes of the annoying Perez Hilton) without any mention of her accomplishments, and important enough in show business to merit a New York Times obit that curiously didn’t mention her work for Scorsese. The details are this: she stopped her car on Forest Lawn Drive in L.A. to look after an animal that she thought was injured (one obit said it turned out to be a dead possum). She was struck by one car, and then hit by another, which ran over her and dragged her 600 feet. One driver stopped and reported the story; the other driver kept on moving.

To step beyond the sad essentials of this story (the fact that Ms. Bethune’s love of animals cost her her life — I know quite a few ladies who would go to the same lengths, and would sadly end up in the same situation), the obituaries revealed that, as both an actress and a dancer, she had had quite a rich career that saw her reinventing herself and having several personal triumphs.

The first of these triumphs was the fact that she went from having scoliosis as a child to studying at Balanchine’s School of American Ballet, and performing in his production of the Nutcracker. After having soloed at the New York City ballet, she went headfirst into an acting career that found her appearing on many dramatic TV series — I recently reviewed the Criterion release of The Fugitive Kind on the Funhouse TV show and was pleased to air a clip of one of the extras, a 1958 “Kraft Television Theater” presentation of short plays by Tennessee Williams (directed by Sidney Lumet, introduced by a higly uncomfortable Tennessee) that included “This Property Is Condemned” starring Bethune.

During this period she appeared as one of FDR’s kids in Sunrise at Campobello, had a regular role on The Guiding Light, and appeared on various dramatic series, including the wonderful Naked City, in which her mom takes credit for a murder she committed by mistake (in a switch on what was believed to be the “real” story of the Lana Turner/Johnny Stompanato case):

And this find, an episode of Cain’s Hundred (1961-62) called “The Swinger,” written by the show’s star Robert Culp, and guest starring none other than Sammy Davis Jr.:

Her biggest success on television was a starring role in the soap The Nurses (1962-65), which got her on the cover of TV Guide and found her being booked as a guest to sing, dance, and make silly small talk with the host on The Judy Garland Show in 1963. The cutesy opening (where Zina B. affirms that, yes, that is her real name and, no, she was not a real nurse). The intro is here. Judy and Zina do “Getting to Know You” here (with a booze joke from Judy!):

Judy, Zina, and Vic Damone do an “all-purpose holiday medley”:

After The Nurses went off the air, she was a regular on Love of Life from 1965-70. It was at this time that Scorsese cast her as the female lead in his first feature, which was initially called on “Bring Out the Dancing Girls” and “I Call First,” before it became “Who’s That Knocking…” with the addition of a sequence intended to get the picture a more “adult” audience (and provide the first big-screen visualization of the Doors’ “The End”). More on that below, though.

Her acting career continued with small roles on TV in the Seventies and Eighties, but her biggest success onstage in her later career was a role in the Broadway show Grand Hotel from 1989 to 1992:

Bethune kept moving in other directions as well. She became the founding director and choreographer of an L.A. dance company and also ran a dance/performance program for kids with disabilities called Infinite Dreams. She is seen here in a recent interview for a documentary called L.A. Woman (she’s at 1:07):

Since I was a devout Scorsese follower for many years, I will close out on the film that most of us knew Ms. Bethune (married name: Zina Feeley) from. Her scenes in Who’s That Knocking…? were shot in 1965, and it is noted in an interview with Mardik Martin that is online that she was an established TV actress, so they had to do her scenes all at once — the film’s lead, Harvey Keitel, was an unknown at this point, but Zina Bethune was a star and was getting the highest salary in the film.

She first appears in the film in the scene that basically put Scorsese on the map (since Ebert loved the picture when it was titled “I Call First”) as a visual innovator, the meet-cute moment where Harvey Keitel talks her up in the Staten Island Ferry terminal, discussing John Ford movies with her and being the first chatty, charismatic, and slightly dangerous Scorsese protagonist. The scene is most definitely inspired by Godard and the other New Wavers, but the visuals come from Scorsese’s own restlessness and invention:


A bit later on in the pic, Harvey and Zina walk to the insanely catchy “I’ve Had It”:

Her death was tragic, but it is indeed nice to know that she enjoyed not only a second act in her career, but also a third and fourth.
Posted by Media Funhouse at 3:11 PM