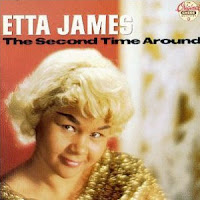 The old adage about celebrities “dying in threes” means that sometimes actors are jammed in with authors, singers with filmmakers, and TV stars with composers. In the past month, three musical legends died in short succession. Two of them knew each other well (in fact one discovered the other), and the third individual was connected to them in terms of musical stylings, and the fact that he too was a soulful, effortlessly funky musician. (Some might argue that he wasn’t up to the standard of the other two musically, but I’ll offer evidence to the contrary below.)

Etta James was the last chronologically to depart (she died on January 20th, the next two gents left on the 17th). She is remembered primarily for “At Last,” an incredibly romantic song that has indeed been played to death over the past few years. She had a number of big hits, but that was her signature song, and much was made of the fact that when it was sung at Pres. Obama’s inaugural ball, the singer chosen was the pretty but utterly soul-less Beyonce. (Anytime you stack her up against the true r&b singers of the past and present, you find she’s… really, really pretty. And dances well too!)

James had some big battles in her life — against the music business’s treatment of “girl singers,” against drugs, and finally against leukemia and dementia. Those battles informed her absolutely gorgeous ballad singing. But first there was rock ’n’ roll.

The above song was “dirty’ in its day, so dirty that its title had to be changed from “Roll With Me, Henry” to “The Wallflower” (which is some kinda brilliant joke on someone’s part). The song was an “answer song” to Hank Ballard’s “Work With Me, Annie,” and was cowritten by Etta and Johnny Otis — but more on him in a minute. First, another sample of Etta rocking it out back when it really mattered, with the terrific “Good Rockin’ Daddy” and “Shortnin’ Bread Rock.” Never has the phrase “you better see that I’m well-fed” had less to do with food.

There is a dearth of live footage of Etta in her prime online. This terrific clip, which appears to be from the mid-Sixties, gives an indication of how electric she was. This woman did not fuck around:

We do have an ample amount of clips from her later career, especially of her dueting with other artists. The weirdest one has to be The Grateful Dead, the most appropriate is Chuck Berry (whose competitive streak comes out throughout this performance — he can’t stop “responding” to Etta’s vocals, and even does the duck-walk to draw attention away from her):

One of her other killer rock/r&b tunes, “Tell Mama,” also eclipses the hell out of the gorgeous but way-too-slick “At Last” for me. Her other indelible signature song was the heartache standard “I’d Rather Go Blind”:

Etta knew true emotion in music — her only cover album was a tribute to Billie Holiday. Here is one of the prettiest of what Sinatra used to call “saloon songs”:


She had impeccable and interesting choices in covers over the years. She did a great version of Alice Cooper’s “Only Women Bleed,” and in the early Seventies delivered gorgeous versions of three Randy Newman songs — the sexy “You Can Leave Your Hat On,” the emotion-riddled “Sail Away,” and Randy’s incredible ode to an uncaring deity, “God’s Song (That’s Why I Love Mankind).” This is perhaps the most perfect version of this atheist’s ode, sung in beautiful gospel tones: 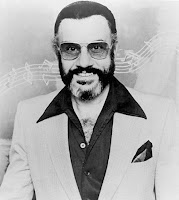 Etta’s initial mentor in the biz also died this past month, on the 17th. Johnny Otis was a 100% r&b/rock ’n’ roll legend whose obits made much of his many identities: musician, bandleader, songwriter, mentor, and DJ (for four decades!). Later in his career he left show biz for a while and served as a minister. Throughout his life he remained an activist for political causes and also had a deep interest in organic farming (!).

So there was all that feverish activity in his life, but the most interesting item about Otis was that he considered himself black but was in fact born a Greek-American. Brought up in an African-American section of Berkeley, he felt more at home among blacks, and assumed that identity (from Ioannis Veliotes to Johnny Otis) for good when he became a musician. He started as a jazz drummer and quickly became a bandleader. His biggest hit during this period was the haunting “Harlem Nocturne”:

Take in the raunchy sounding “The Midnight Creeper” and you’ll hear where his head was at in the Fifties. He was part of the wave of r&b acts who created what we know of as rock ’n’ roll — please listen to this scratchy old recording of “Rock Me Baby,” and you’ll know (as with Etta and her “rolling” with Henry) that r’n’r wasn’t intended to be background music for fucking, it was ABOUT fucking.

But that was hard to sell on AM radio, so more polite metaphors were necessary. Hence Otis’ biggest hit, with a riff taken off of Bo Diddley, “Wille and the Hand Jive.” Here a troupe of Broadway dancers show us that rock is safe for white people (while Johnny produces an “earworm” hook like no other):

Johnny’s other identity in the early years of rock was as the man who discovered a raft of major talents, including Etta James, Little Richard, Hank Ballard, Big Mama Thornton, and Jackie Wilson. While he was doing that, he also found time to release killer singles like “the Hash”:

Otis was a versatile musician who picked up on a bunch of genres, including Latin music (which we’ll get back to with our third Deceased Artiste), as in his sequel to “Hand Jive,” “Willie did the Cha-Cha.” He didn’t remain stagnant as the years went by, and the music made by his band, wonderfully called “The Johnny Otis Show,” moved with the times. Check out this awesomely funky number that posits a dance that probably never existed outside of Johnny’s vivid musical imagination:

The singer on the “Watts Breakaway” above, Delmar Evans, joined Johnny and his virtuoso rock guitarist son Shuggie Otis for an album credited to “Snatch and the Poontangs” that contained some wonderfully dirty novelty music, including this old chestnut performed by many other artists including “Dolemite" himself, Rudy Ray Moore:

Although Mr. Otis was a man of God, and by all accounts an extremely moral individual, there is no other word to use to accurately describe his brand of raw rock ‘n’ roll than “raunchy.” In closing, I pass you “Low Down Dirty Dog Blues”: 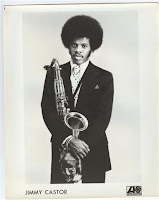 The third member of this troika didn’t ever work with the first two, but his music overlapped with theirs, especially Otis’s, in its emphasis on soul, Latin, and funk. Jimmy Castor was a NYC boy (who grew up, according to which obit you read, in either the Bronx or the Sugar Hill section of Harlem) who first established himself in a doo-wop group called Jimmy and the Juniors. He wrote a song, “I Promise to Remember,” that became a hit for his friend Frankie Lymon.

He continued on a saxophonist and percussionist until his first hit in 1966, the Latin-inflected “Hey Leroy, Your Mama’s Callin’ You” (you don’t get many excellent direct-address titles in music).

Castor’s lyrics were always, how shall I put it, silly, but sublimely silly. Here he is in 1973 performing a medley of “Hey Leroy” (watch him kick ass on the timbales!) and the sequel-tune — yes, this is the full title — “Say Leroy (the Creature from the Black Lagoon is your father).”

Castor’s music was terrific and his lyrics were, yeah, pretty bizarre. Being a fan of novelty records, I love them to pieces, though, particularly because of their mix of funky music and nonsense lyrics. In 1972, he had his biggest hit with “Troglodyte (Cave Man),” which introduced the immortal refrain, “Gotta find a woman, gotta find a woman…”

And the equally immortal sequel, the “Bertha Butt Boogie”

As the Seventies continued, disco eclipsed funk and Castor was right in line with the dance beats of the time, as in the trippy and relentless instrumental “Psych Out.” His music was heavily sampled in later years by rap artists, and he set a precedent for other recording artists by suing the Beastie Boys for using a sample out of his “Return of Leroy” without credit or remuneration (he made a settlement, and later claimed he had pursued it not for the dough, but for the principle of the thing). One of his most “utilized” tunes, funky as all hell (minus the novelty lyrics), was “It’s Just Begun”:

My favorite piece of odd trivia about Castor is that he filled his albums with renditions of songs you wouldn't figure he'd cover. During his Latin period he covered "Winchester Cathedral," later on (during the funky era) it was Elton John's "Daniel" (lounge-y!), on another LP it was "Stairway to Heaven," and on one of his later disco-funk recordings he for some damned reason had a cover of "You Light Up My Life."

Since I do really love novelty records, let me close out with two of Jimmy’s silliest, his ode to the one and only Dracula:

And my favorite of all his songs, a tune that burned itself into my brain a quarter of a century or so ago. All bow down before “King Kong!” Here Jimmy performs the song’s opening verse live:

But here is the full version of the song with my favorite verse: “He didn’t dance or party/he spoke at times but hardly/One woman heard his love call/but he was too big and too tall.” Jimmy, we’re gonna miss you, Kamasami!

Posted by Media Funhouse at 1:31 AM

I never warmed up to Castor's biggest novelty hits (Leroy/Bertha Butt/Troglodyte) because I find them really unpleasant, so when I'm in the mood (as I was earlier this week when I learned of Castor's passing) I reach for my LPs of "Super Sound," "Maximum Stimulation" and "E-Man Groovin'" rather than the best-of compilation. "King Kong" and "Dracula" still make me laugh. -- Po