"Hugo": a love letter to cinema (and respite from Leo!) 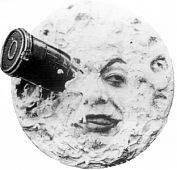 I’ve already noted on this blog my great disappointment in the beautifully crafted but soulless work produced by Martin Scorsese in the years since Kundun. His latest film, Hugo, contains several elements that would seem to make it yet another venture into multiplex-land: a massive budget, a kid protagonist, a “heartwarming” promotional campaign, and 3D. Instead, the film is the best thing Scorsese has made in a decade and a half, and the first time his holy cinephilia has been “smuggled” (his phrase from Personal Journey) into a fictional narrative.

The film is a few minutes too long — Scorsese can't really answer his own question to young filmmakers, “is it as tough as Bresson?” (read: lean) — and is also incredibly sentimental. In this instance, though, the sticky-sweet sequences are evenly spaced out, and in the latter half they are hooked securely to the love of cinema in a way that makes them quite touching.

In the end, there are two key elements that make Hugo vastly different from the last decade of Scorsese “pictures”:

— it was made in England with a predominantly British cast, thus ensuring that no wildly miscast American star (Cameron Diaz, Gangs of New York), comatose lead (Nicolas Cage, Bringing Out the Dead), or preening wonder boy (Marky Mark, The Departed) shows up to utterly disrupt the narrative.
— no Leonardo DiCaprio (hosanna)!

The greatest joy of Hugo is that it seems to exist for an actual reason (was/is there any reason for The Departed to exist — and be 151 minutes long?), and that reason is for Scorsese to use state-of-the-art technology to conjure up the most primitive cinema there was, and the most magical: the works of Georges Méliès. It’s a perverse decision to be sure, but one that succeeds beautifully.

3D is a gimmick, one that was created in the Fifties to combat television and has been reintroduced into the marketplace to combat movie downloads. It has held no interest for me, as it has been used to gussy up the kid-centric fodder that occupies every multiplex everywhere. However, if this resurrected and improved technology is used with an experimental purpose in mind — as in Herzog’s Cave of Forgotten Dreams and Wenders’ Pina — the effects can be remarkable. 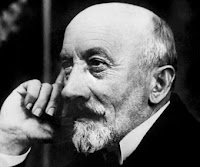 In Hugo Scorsese first creates a clockwork universe that seems derived in equal parts from Tati and Jeunet, and then takes us into the less intricate but more riveting world of magician-turned-filmmaker Méliès (right). Though chronologically “primitive,” Méliès’ films remain far more impressive than the computer-crafted flicks that currently flood into the multiplex.

So, as Herzog used the third dimension to convey the nuances of prehistoric cave paintings and Wenders spotlighted the spaces between dancers, Scorsese uses the current technology to underscore the hard work and surplus of imagination that went into Méliès’ handcrafted films. Hugo may have a young protagonist (two in fact), but it aims quite higher than the usual raft of anthropomorphic animal (or doll, or car) movies that are being presented in 3D (oh, and that nightmare of tedium that is “motion capture” — just make a fucking cartoon, guys, or a live-action feature!).

Here Scorsese draws on the tradition of French films about children leading independent lives (Forbidden Games, Truffaut’s work, and a healthy dash of Zazie dans le Metro). The constant succession of chases in Hugo does parallel what goes in most kid-centric H’wood pap, but here it evokes the races-against-time that distinguished silent cliffhangers from the likes of Feuillade and Griffith.

As noted, I detected the influence of Jean-Pierre Jeunet throughtout Hugo, and this is just as it should be, since, as I’ve noted on the Funhouse TV show, the most interesting uses of CGI effects in the past decade has occurred in French films (Rohmer’s The Lady and the Duke, Vidocq, every film in French by Jeunet), creating distinctive period pieces, but also fashioning interdependent universes in the Metro, a bar, an apartment building, and so forth (take a glance at Amelie, or Jeunet and Caro’s Delicatessen, and you’ll see the blueprint for Hugo).

Scorsese demonstrated his debt to the French New Wave in his sublimely rough-edged Seventies masterworks (think of the Alka Seltzer scene in Taxi Driver, evoking Godard’s Two or Three Things…). Here he openly pays tribute to Godard and Truffaut by having an “expert” (Méliès, played by Ben Kingsley, above) supply an entertaining lecture on the beginnings of cinema, looking straight at us. Kingsley’s Méliès is every expert Uncle Jean introduced to explain something in detail to a character, as well as every Truffaut character who spoke directly to us rather than another character, to tell a story from the past.

A few quibbles aside, Hugo is the film that older Scorsese acolytes of old have been waiting for — giving us a respite from the deadening central presence of Leo. It’s a film that reminds us exactly how expert a filmmaker Scorsese is, putting his technical proficiency at the service of a storyline that evokes genuine emotion and wonder.

I can only hope that Scorsese continues to make British or European-themed films, as it can reinvigorate him as it has reinvigorated Woody Allen. Never forget that European and British funding allowed Funhouse deity Robert Altman to survive when he was out of favor in Hollywood (which was quite often).

I’d love to see “le grand Marty” produce another picture that is “as tough as Bresson”; I’m not sure that’s ever going to happen again, now that he’s infatuated with big, large, massive, colossal budgets. I’ll settle in the meantime, though, for something he really cares about, that isn’t a star vehicle and is worth rewatching. Merci, MS.

*****
Méliès' work is available in profusion all over the Internet because (unless the film in question has been wildly tinkered with), it has fallen into public domain. Thus, you can see numerous copies of his most mind-warping films, but I would recommend these as a “starter kit.” First, the “greatest hit,” featured heavily in Hugo, “Voyage to the Moon”: