Three Jewish comedians on the topic of Christmas presents 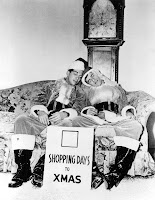 So these three Jews walk into a department store… no, no, that’s very politically incorrect. However, since I want to salute the holiday without trotting out the same tunes you hear ALL the time, and I certainly don't want to go anywhere near the religious content of the occasion, which (let’s face it) has nothing at all to do with what goes on around this money-centric country anyway. The Yuletide is all about the gifts, and so there is no better subject to be tackled by comedians in search of an Xmas single. (When people did release singles, that is. I am old.)

In this spirit I offer three Jewish comics from different comedic backgrounds supplying their takes on Xmas. First, the rarest track of the three, one I personally uploaded to YT, Marty Feldman’s “A Joyous Time of the Year.”

This is included in a CD release called “I Feel a Song Going Off” that is made up of the contents of a 1971 Marty LP called The Strange World of Marty Feldman, plus extra tracks which may or may not have been singles. Marty was a true original who did Keaton-precise physical comedy (see his “Loneliness of the Long Distance Golfer”), but he was also extremely funny as a manic character comic (watch this sketch). Here is his Xmas ditty:

A few years later, Albert Brooks released this single written by him and Harry Shearer. Interestingly, Albert was not a dad when this came out, but had children later in life. It’s a nice and nasty piece of business that comes from the period when Albert was a wonderfully abrasive comic presence (see my article on his transformations as a comedian and filmmaker). From 1974, “A Daddy's Christmas”:

And finally, since we never heard from him this past Labor Day (or since), I’ll close out with the “unkillable Jerry” (French variant title of one of his comedies). Here he laments the crappiness of his gifts with a song that is a lot more listenable than “All I Want for Christmas is My Two Front Teeth” or “I Ain’t Getting’ Nuttin’ for Christmas (’Cause I Ain’t Been Nuttin’ But Bad).” Herewith Jerry’s “I Had a Very Merry Christmas” — whatever you think of it, it’s worth it just to hear his pronunciation of the name “Minnie the Mermaid” (and, yes, I uploaded this one too -- these things need to be heard!):

Thanks as always to Jim G. for his diligent work unearthing the rarest comedy LPs found on the Net. His hard work is invaluable.
Posted by Media Funhouse at 12:05 AM