In terms of having read Hitchens’ writing, I am severely undernourished [UPDATE: not any more, but more on that in a future blog post], so I will speak about his importance as a media personality and a public intellectual, which is a very rare and valuable commodity in the culture of idiocy (oh, sorry… oversimplification) that has ruled in America since the B-movie actor was Pres. Hitchens could be, and quite often was, a major pain in the ass to listen to or read, if you disagreed with him. As a Lefty who enjoyed his columns in The Nation, I found his later discussions of how the Iraq War was a just one (against “Islamofascism”) endlessly annoying — more than likely because I wanted one of the best media intellectuals on my “side” and not putting his impressive intelligence in the service of something that was so clearly wrong.

But Hitchens, like any good intellectual, argued on a higher plane than most individuals whom you encounter on a daily basis, so even his most stridently wrongheaded arguments had a grounding in facts and were presented with a force that is rarely encountered outside of academic settings. 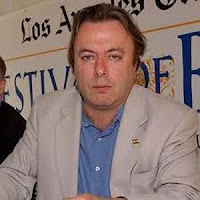 Hitchens had personality, dammit, whether he was right or wrong, and his lectures, print interviews, and TV appearances exuded the kind of contentious brilliance that was de rigeur in the days of Norman Mailer, William F. Buckley, and Gore Vidal (thankfully we still have Vidal among us, an American national treasure and a rapier-sharp speaker), but has sadly disappeared from sight.

Hitchens was defined for many Americans by his English accent, incredible erudition, his linearity of thought, the reputation as a massive smoker and drinker, and yes, his obnoxiousness in interview and debate settings. Watch this wonderful clip from the fucking awful MSNBC show Scarborough Country and you’ll see him in fine form, telling off a representative of Jerry Falwell whom he’s supposed to be debating about the “war on Christmas.”

The fact that Hitchens didn’t suffer fools gladly made him a joy to watch, and this impatience made him invaluable when confronted with ridiculous belief systems like the “selfishness is good” Objectivism cult of Ayn Rand. His comments here decimate the whole Randian philosophy (plus her crappiness as a writer) in a scant few minutes:

He began as a socialist, a Trotskyite in fact, and was a heralded writer for Leftist publications until his “Islamofascist” period, which was followed by what seemed to be a move back to the Left (perception… and American politics!) with his decision to devote his attention to the dangers of organized religion and to explore his atheism.

Throughout his life, however, he remained a man of ideas who wrote books about authors and politicians he idolized (Orwell, Paine, Jefferson), while taking on people whose mythologies he felt concealed their hypocrisy (Kissinger, Clinton, Mother Theresa).

At times it seemed like he pursued conflict for its own sake. At one point he made a strident, Jerry Lewis-like, incorrect pronouncement in Vanity Fair about women comedians not being as funny as men — a topic that can be debated endlessly, but I think has much more to do with the audience reception (that audience including Hitchens), and the cult of personality that surrounds humorists and comedians. The question is, will straight men ever be cult followers for a woman comic as they would for a male? Will other women? 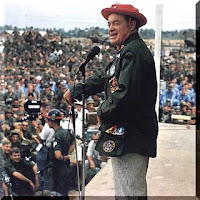 That debate truly felt like it was “Hitch” just honing his contrarian pain-in-the-ass image, although I have to fully agree with his savage attack on the inherent unfunniness of Bob Hope. Sure, Hitchens was ignoring the extremely entertaining movies Hope made in the Forties and early Fifties, but by the Sixties the Old Ski Nose was truly agonizing to watch (his specials from the Sixties through the Nineties remaining interesting more as cultural curios than classic comedy). Hitchens was one of the few to write about this after Hope died.

Hitchens was thus an invaluable voice even when he was being petty and bitchy about something that just popped into his head — his positions required that the listener/reader think in order to respond. He addressed the issue of whether his ire was fabricated in this very good C-SPAN interview:

I believe his decision to deconstruct “the Mother Theresa myth” was extremely important — so many people blindly worship the lady that Hitchens’ contention that her beliefs (among them, that suffering is “holy”) were wildly illogical and in fact detrimental to the people she “gave her life to” was something that needed to be said. He backed this up with facts about the way her missions operated, and how she moved among world leaders while espousing her message about the “biggest crime” (abortion).

A short-form version of his argument against her can be seen in this segment from Penn and Teller: Bullshit!, but a full thirty-minute documentary he made, Mother Theresa: Hell’s Angel, is available on YT:

Without question, what wound up being Hitchens’ legacy is his devotion to advocating and explaining atheism to those who are still tethered to the reassurances of religion. He lacked the scientific background and logical precision of Dawkins, but his lectures and interviews on the topic were never less than brilliant.

One YT poster put together an expert little montage of some of the best moments from his public debates and TV appearances. Herein you find him making some absolutely superb intellectual points, as well as a few moments where Hitch seems, like good old Norman Mailer, to be playing a “heel” wrestler to an antagonized audience:

What he shared with Dawkins was the ability to point out to the “faithful” that atheists could enjoy life with as much fervor as those who felt they had a safety net in the afterlife. Here both men speak at one of Hitchens’ last public appearances, at the Texas Freethought Convention two months ago. Dawkins gives a nicely sentimental tribute to his prickly debate partner and colleague in rationalism. It's a very moving clip, especially during the visibly weakened (physically, not mentally) Hitch's turn at the mic:

There are literally hundreds of Hitchens clips on YT and even a Hitchens channel. The best way to end this piece, though, is to spotlight his statements on death, first in an interview with Anderson Cooper talking about how the faithful were hoping for him to experience a “deathbed conversion”. Here are his comments about the key use of the afterlife as a come-on in religion:

Most of Hitchens’ fans were taking swigs of his favorite Johnnie Walker Black on the day of his death. I am not fond of the taste of whiskey, so I salute his memory as I can, with a clear thought and a rationalist’s admiration. Yes, he could be massively annoying, but we need many more people who can annoy the way that Hitch did.
Posted by Media Funhouse at 6:36 PM