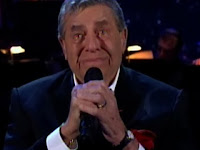 Well, the expected event has occurred, but before we thought it would (a lousy month before): the MDA has announced that Jerry Lewis has “completed his run” (nice ex-employer wording!) as National Chairman and won’t be hosting this year’s Telethon. Clearly the crazy and idiosyncratic press conference Jerry held last week — recounted to best effect here — spelled the end of Jer’s tenure at the MDA.

He stated at that conference that he would explain his so-called “retirement” from the show at a press conference after the ’Thon was over, and inferred that this wouldn’t be his last year as the show’s host, by using a reference to what he referred to as the “The New York Times ‘Dewey Wins!’ headline” (that most likely went over the heads of the younger journalists in the room — and it was actually the Chicago Daily Tribune proclaiming “Dewey Beats Truman”). 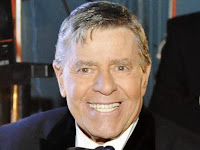 Jerry has always been a loose cannon, and that’s been the delight of watching the telethon. In an era when nothing unpredictable ever happens on live television (even on the talking-head political shows that are theoretically “unpredictable”), watching Jerry be so blatantly arrogant, rude, giddy, sentimental, and emotionally overwhelmed provided one of the last pieces of genuine (and genuinely bizarre) TV entertainment to be found.

As I noted in my last post about Jerry’s leaving the telethon, it was pretty evident that he was being ousted by the MDA when the two press releases announcing the telethon being cut back to six hours and Jerry’s “retirement” as host of the show didn’t include a single quote from the man himself.

So, as I did in the last post, let me acknowledge that the MDA’s main goal is to raise money to pay for research and items to help those afflicted with the disease. (Jerry has always spoken about a cure, whereas I don’t know if the MDA ever goes near such a notion.) Jerry’s “pity-based” way of raising money is from another era, when it was okay to diminish those who suffer from the disease. The famous “half-a –person” quote comes into the argument here. Warning: this clip includes "Angry Jer":

But, then again, the central reason most folks have even heard of the MDA is because of Jerry’s work as the National Chairman for the past few decades. You can argue that he made the telethon the main focus of his career because his movie career died in the late Sixties (and his TV career never, ever took off after the breakup with Dean).

Still, as the National Chairman and host of the Telethon, he has raised millions (actually $2.6 billion cumulatively). Here is a great example of the aforementioned “pity-based” fundraising that I uploaded to YT several years ago. It seems very corny and clichéd these days, but it did raise big dough from the time that the Telethon became an annual occurence, back in 1966:

So should the MDA have ousted him so unceremoniously? On the pragmatic level, you can’t have the host of your annual telethon badmouthing the organization on national TV (or whatever remains of “the Love Network”). But when your official spokesman has been Jerry Lewis, you’ve already made a Faustian bargain (shades of Damn Yankees!) — since Jerry was never going to be a Danny Thomas-like, friendly “face of charity.”

The MDA has pitched Jerry out in order to “rebrand” the franchise, but it has made a perennially angry senior citizen FURIOUS. And, whatever they may’ve thought they were doing, they did indeed muddy the organization’s image (unless they go the limit and change the name from MDA), since those who have heard of it to this date would most likely identify it with “that all-night TV show with that old comedian” — who, as much as he may be hated by some, is respected, revered, and beloved by others.

Neither option benefits the MDA in the long run — for surely the Telethon will be gone in a year or two at most, as the very notion of a telethon is something that appeals only to older viewers. Younger viewers brought up on the Internet (and those clunky two-hour celeb-filled approximations of telethons) have no referent for it, nor should they — since, as Jerry pointed out in a far brusquer fashion at his press conference last week, “appointment television” no longer exists, except for sporting events, award shows, or the occasional news phenomenon (like the recent Casey Anthony trial). 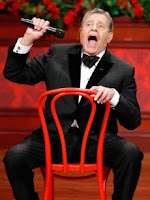 Those who have followed Jerry’s career over the years (either as a function of worship or derision) are obviously waiting to see how long it takes him to address the situation publicly (he is not the kind of person who could be bribed to shut up). I expect that an “exclusive interview” (or two or three) will find him, if he’s wise, playing the injured senior whose pet charity (which he’s raised billions for!) has thrown him out with the trash. If he plays the role properly (and the “I raised billions for them” aspect is obviously true), Jerry could be viewed in the public eye in a way he’s rarely (if ever) been seen before: sympathetically.

******
Since the tradition of watching Jerry on Labor Day has now officially been killed by the forward-thinking types at the MDA (that tradition, by the way, *won’t* end on the Funhouse TV show), let’s take a little trip back to the earliest surviving record of a Martin and Lewis telethon-type show. 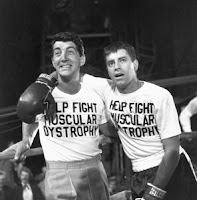 For trivia buffs, the very first M&L-hosted telethon occurred in March 1952 (they also guested on the very first telethon ever, for the Damon Runyon Foundation, hosted by Milton Berle). The 1952 show lasted from midnight until the afternoon of the following day, and the proceeds were split between a cardiac hospital and muscular dystrophy research.

The official start date for the telethon as we know it was 1966 — but Jerry apparently did local ones in between the early Fifties and then, if this piece of footage of a “1959 telethon” isn’t mislabeled. The first surviving footage we have of a TV show done by M&L to benefit muscular dystrophy comes, however, from a two-hour show that aired on November 25, 1953, and was called “The Television Party for Muscular Dystrophy” (!):

Labor Day just won’t be the same without ’im.
Posted by Media Funhouse at 3:24 AM

Excellent editorial. Believe it or not, I too am extremely disappointed. Supposedly, life is all about change, but some things - like the telethon, and perhaps Jerry Lewis himself - occupy that Venn diagram overlap: the anticipation of the unpredictable and unknown on one hand, and the comfort of repetition and sameness, which we all crave. Especially when it comes to Jerry Lewis. Our taking any pleasure in kitsch is a true luxury in a rapidly changing world.

I thought Jerry handled it pretty well
considering the fact that
being interviewed by Chris Wallace is
like listening to fingernails
screeching down a blackboard.