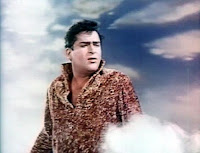 I know very little about Bollywood cinema, but what I have seen I've loved. During the early years of the Funhouse TV show (which began in 1993 — comin’ up on 18 years, folks!) I showed and re-showed a small handful of B’wood musical numbers I taped off PBS, several of which involved the inimitable Mr. Shammi Kapoor, who died on Aug. 14 at the age of 79.

A four-part series about Indian cinema aired on PBS in the late 1980s, and the two episodes that melted my mind in wondrous ways were something called “Dance Invasion” and another that profiled Shammi. These programs have never been rerun since to my knowledge, but I believe “Dance Invasion” was seen by the folks who did Ghost World, as the Bye Bye Byrdie-ish rockin’ clip from the thriller Gumnaam (1965) that starts off that film also started off the “Dance Invasion” special (and was later reshown on a Manhattan access show, again from the DI special). 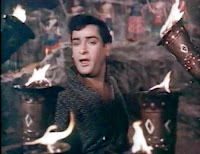 The carefully chosen B’wood clips in that series were a revelation to me, and the performer who simply blew me away was Kapoor. I was struck at first by how feverishly he danced around during the musical numbers.

In most of his best Sixties musicals he’s a somewhat chunky guy with a prominent pompadour, but he did dance moves that were, by turns, wildly funny and extremely cool. Without any ado, I give you the clip from Teesri Manzil (1966) that converted me to the cult of Kapoor. If you don’t smile when watching this, you’re officially dead. [HEAVILY RECOMMENDED]:

I watched and rewatched these clips with my friends on “video nights” back in the Eighties, and all of them were duly impressed by Shammi’s frenzied movements. The only possible way I can explain Kapoor’s dancing is to say he seemed like Dick Shawn’s long-lost Indian brother.

Shawn, of course, was a comedian-actor who danced wildly, and Kapoor was a leading man who played in dramas and comedies that were chockfull of musical numbers. Both men were far more uninhibited in their gyrations than Elvis — Kapoor in fact was dubbed “the Elvis of India” in the late Fifties. They both were also high-key performers who were unashamed of looking silly onscreen and were totally in control of the film frames they inhabited.

On this last point, it should be noted that Kapoor may have seemed like he was shakin’ out of control onscreen, but in that PBS profile I taped, he spoke at length about how he planned his wild, uninhibited dances. He discussed how he knew exactly when to quickly exit the frame on a beat and when to reappear in another set-up (thus putting him in the class of comedian-filmmakers from the silent era). This resulted in some kinetically edited musical sequences like this one (no I can’t explain why the schoolchildren get involved) or this playful number. This item, also from Teesri Manzil, is a delightful bit of song-seduction with a refrain that sounds like “peachy, peachy”:

For some seriously frenzied rockin’ out from Shammi, here is yet another scene from Teesri Manzil that seems modeled on the “What I Say” scene in Viva Las Vegas [RECOMMENDED]: 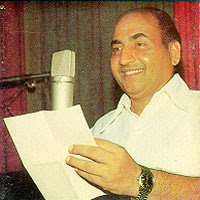 The most interesting thing to keep in mind when discussing the musical sequences in B’wood productions is that the actors rarely if ever sang their own songs, thus spawning an entire industry of Marni Nixon-like “playback singers.” Shammi’s primary playback singer was a legend in the annals of B’wood, Mohammed Rafi — who, according to various Internet sources, sang in 15 Indian languages and dialects, as well as English and several European languages, and recorded over 25,000 songs!

In his online vlog entry about Rafi, Kapoor maintained that he would talk to Rafi about what he was going to be doing physically during a given musical number. Rafi didn’t look like a rocker at all (see above), but he matched Shammi’s energy levels with his rockabilly-styled vocals.

Here is another of their collaborations, a low-key number from Kashmir Ki Kali (1964) that Shammi performs in an empty bar (Frank called ’em “saloon songs”) with a sax player in attendance:

Kapoor of course performed many low-key ballad-type songs in his movie career but, again, my focus here is on his upbeat moments. I still am blown away by his energy, particularly as he put on weight as the Sixties turned into the Seventies. I do occasionally laugh out loud at his dancing and gesticulations, but I think that would be okay with the man himself (especially given the impression of him one receives in his vlogs).

He was so into what he was doing onscreen that to laugh while watching him is to merely acknowledge that he was having a GREAT time performing a given number (and/or flirting with his delightfully pretty costars). Kapoor was unafraid of looking silly onscreen, which is a rare quality among film stars — unless they are comedians or actors who are known for musical-comedy performances (Zero Mostel, Bert Lahr). 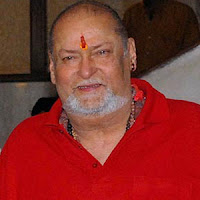 Shammi was truly one of a kind and, although I know quite little about his personal life and the incredible cinematic legacy of his family (the Kapoors were/are indeed a “dynasty” that have been quite important in the history of Bollywood), I feel that I got to know him a little better by watching the aforementioned video blogs, called ”Shammi Kapoor Unplugged.” (He apparently came up with the name, as he says it on-camera proudly in each entry, further proving his Cool Old Guy status.)

Uploaded to YouTube by three separate posters, they constitute a very informal personal history of a performer’s career. Kapoor was a Net addict in his later years (he talks about it here), and he understood how to communicate with the average Net-surfer, who is not likely to read a bulky show-biz memoir, but will surely watch a superstar sharing his favorite anecdotes on camera. Here is one of my favorite entries, proving that Shammi definitely had a sense of humor about what he was doing:

You can see Shammi as a thin matinee idol in this 1962 clip. From the same film, Dil Tera Diwana, here is a classic Bollywood number in which both hero and heroine get soaking wet as they seduce/sing to each other:

Shammi does some more classic seduction with ebullient dance movements (in a boat, yet!), in Kashmir Ki Kali:

Perhaps the most energetic scene that Shammi took part in didn’t involve dancing — it was this number in which he hangs from a low-flying helicopter (in a bathrobe!) from the 1967 film An Evening in Paris.

The best part about rewatching these Kapoor musical numbers is being reminded of the catch-phrases that he had as wild choruses in his songs, as in this rockabilly number from China Town (1962) in which he repeatedly intones a phrase burnt into my brain, “Tally-ho!” [RECOMMENDED]:

A number that is blatantly comedic from Dil Tera Diwana, which includes the phrase “woof!” Yes, Shammi is singing to a man in drag:

One of the films that made him into a star was Junglee (1961). Here’s a killer number from that film in which the phrase “Yahoo!” is screamed (not by Shammi, or by the singer Rafi, according to Shammi, but by another actor who had a deeper voice). [RECOMMENDED]:

Another number in which Shammi is a bona fide wildman. I can’t tell what he’s screaming at the opening, but the song is another high-energy rouser. From Tumse Achha Kaun Hai (1969):

And a last unforgettable catchphrase, “Suku suku,” from Junglee again. This scene reflects the B’wood passion for Russian and Spanish dancing (I’m not sure why these two cultures fascinated the makers of B’wood pics, but they did). The female lead in the film, who gets more screen time here than Shammi does, is billed as “Shashi Kala”:

Next are two oddities: first, Shammi does an entire song/dance sequence holding two bags after having exited a store (they were just tryin’ ta slow him down, but the man could not be slowed down!). From Professor (1962):

And, yes, although he was called the “Elvis of India,” Shammi did do one Beatles number. It’s a Hindi version of “I Wanna Hold Your Hand” (!). The Nehru jacket comes home in this number, which was shot months before George discovered the sitar on the set of Help! From Janwar (1965); sung, of course, by Mohammed Rafi:

I have to close this tribute out with a another killer number. This one comes from Tumse Achha Kaun Hai. It has a Big Bopper-esque beginning, a heavily rockin’ sound, a sailor in blackface (or is it greenface — I can’t tell if this is racist or just insane), cute girls in brightly colored dresses, and Shammi providing a super-energetic performance of a hyperventilating vocal by Rafi. [HEAVILY RECOMMENDED]:

Thanks to Charles Frenkel for passing on the fact that Kapoor had died. One of the best comments I read about his passing was from one of his directors: “Don’t mourn Shammi, envy him!” The gent seemed to have had a very nice life, and continues to entertain his countrymen and those foreigners like myself who stumble across his work and are duly impressed. Mourning does seem beside the point. Tally-ho!!!
Posted by Media Funhouse at 12:14 AM