Back when my dad was trying to convey to me the vibrant and important nature of what is now called “the Golden Age of Radio,” there were only a few scattered rebroadcasts of Thirties and Forties shows in the NYC area. But there was Jim Harmon’s terrific 1967 book The Great Radio Heroes. Harmon died last week at 77, so I want to note his passing, and also salute his subsequent tomes, all of which opened up the world of nostalgia culture for those of us born after the Kennedy presidency.

They included The Great Movie Comedians (1970), The Great Movie Serials (1973), and one my dad particularly enjoyed, as it had images of the decoder badges, giveaway rings, and ice-cream lids with movie-star mugs on ’em, Jim Harmon’s Nostalgia Catalogue (1973). Harmon also contributed to the awesome (but not comic-filled, which pissed me off as a kid) history of comics All in Color for a Dime and edited the Marvel ripoff of Famous Monsters, called Monsters of the Movies. 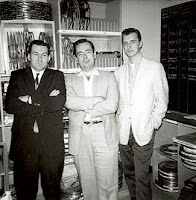 Harmon’s bio notes that he was a pulpsmith in the Fifties and Sixties, which must’ve meant that he was writing when the pulps were dying out and being replaced by the digest-sized sci-fi, western, and crime mags (Ellery Queen, we bless you). He is pictured to the right at a screening of Donald Glut's films in 1962 with Bob Burns and the awesome "Rat Pfink" himself, Mr. Ron Haydock! Harmon is the middle.

One of Harmon's colleagues has put up a nice segment from his appearance on a panel at the Friends of Old Time Radio convention in Newark, N.J. last fall. I heard the audio of this talk on the utterly indispensable “Golden Age of Radio” program that originates on WBAI-FM in NYC on Sunday nights, but can be heard around the world via streaming on the Net. The show is hosted by Max Schmid, who is as invaluable for me as a radio historian in my middle-age as Harmon was when I was a kid. We need to celebrate these gentlemen while they’re around, since the “theater of the mind” that old-time radio represented needs to be kept alive.

Posted by Media Funhouse at 5:15 PM