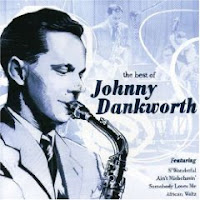 Catching up to another, vastly different, musical death, I should definitely salute Sir John Dankworth, British jazz legend, composer, and big-band leader. Dankworth had a very accomplished career in jazz, having worked with icons from Ellington and Parker to Herbie Hancock and my personal favorite-named musician Zoot Sims. He is best known to American audiences, though, for his work as arranger and bandleader for his wife, Dame Cleo Laine, and for his terrific Sixties movie soundtracks. 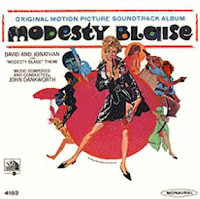 His music created moods and punctuated action in kitchen sink classics, timeless character studies, and truly camp creations. The titles include Darling, Morgan!, and Modesty Blaise, but two of the finest films he scored were Joseph Losey’s perfect Pinter visualizations, The Servant (1963) and Accident.

The trailer for The Servant shows off Dankworth’s score:

But let’s backtrack to Dankworth’s jazz career before going back to his scores. First, a 78 of a song called “Marmaduke”:

Then, a terrific tune called “African Waltz” that Dizzy Gillespie later had a hit with (with the same Dankworth arrangement):

A sample of the five-decade long collaboration between Dankworth and Laine, the song “Woman Talk”:

And, since I can’t resist, back to scores. A TV theme that we never heard over here, the music for the original 1961 Avengers before the female agents hit the scene, and it was simply Patrick Macnee and another guy, Ian Hendry:

A bossa nova number from the score for Fathom, largly known as “that Raquel Welch bikini movie”:

A TV theme from Britain, for Tomorrow’s World in 1978:

Definitely my personal favorite Dankworth score, as it is burnt into my brain from repeated viewings of the film as a teen. The jaunty yet resolute horns heard in the finest (my opinion) kitchen sink/"angry young man" film of the early Sixties, Saturday Night and Sunday Morning:

And just ’cause I can, you can hear the Dankworth score for the Sammy Davis-Peter Lawford hip-detective vehicle Salt and Pepper here in the trailer for the film, but you really need to see this scene wherein Sammy rocks the fuck out in Swinging Sixties London. I note on the Funhouse quite often that it doesn’t matter how long Sammy’s been dead, the dude can still kick my ass with some hitherto unknown all-out performance, and here’s another one:

Posted by Media Funhouse at 1:34 AM