Any regular reader of this blog knows that I do it for no money whatsoever, but merely to spread the good word about the finest in high art, low trash, and other essentials. On the menu bar to the right I have a list of other sites and blogs that offer terrific content, but I think that perhaps only one of the bloggers actually is making money from what he’s doing on his blog (and that money comes from a nice side mail order business, and not the blog proper). These days, I seem to be discovering like-minded bloggers a few times a month, and have come to the very evident conclusion that the Internet is an unending series of trees falling in the forest. My advice is... just listen for the sound.

Sometimes another blogger approaches me, as happened when San Francisco artist Peter Combe wrote praising the full episode about New Yorker Films that I had put up on YouTube (btw, folks, it has been announced that New Yorker is coming back to life as of this writing). Peter does the blog A Tale of a Few Cities. He is a movie fan who posts arthouse-movie joke images in among the many fascinating images of l’art moderne.

And, since I like to move from art to trash and back again, I have to spotlight a blog that is absolutely chockfull of good things and represents of good deal of work by its blog-meisters. It’s called Temple of Schlock, and is a wonderful labor of love that sprang out of a zine started in 1987 by Syracuse residents Paul DeCirce and Chris Poggiali. Those gentlemen now run a blog with that name that incorporates a pretty sizeable collection of newspaper clippings, press booklets, posters (featured in the “One Sheet of the Week” entries), movie collectibles, and even View Master reels.

The Schlock blog is very content-intensive, and two features are personal favorites of mine. The first is the “This Week on 42nd St.” entries, which gives us a list of what played on the Deuce on certain dates in certain years, for instance 1978 and 1985. 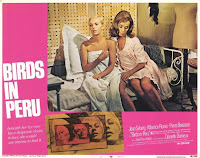 The most important entries DeCirce and Poggiali write, however, are the “Endangered List” blogposts about movies that they have information on, but which have never been released on VHS or DVD. They’ve written up dozens of these films, which include such unfindable rarities as the Romain Gary film Birds in Peru and an amazing-sounding (in so many ways) Rich Little vehicle in which Nixon and Agnew are seen as a kind of Laurel and Hardy for the Seventies. The film was produced by Tom Smothers, and directed by Bob “Super Dave”/“Officer Judy” Einstein. Its title? Another Nice Mess. 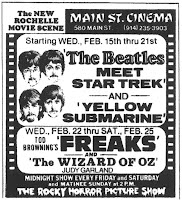 And what can be said about a blog that poses as many interesting questions about lost movies as it answers about surviving ones? In the case of the “endangered” films the bloggers ask us outright for more information on the films’ whereabouts, but in the case of some items, it’s time to just scratch one’s head and wonder. What in the holy hell was the midnight movie “event” entitled The Beatles Meet Star Trek? We’d all love to know.
Posted by Media Funhouse at 1:31 AM

Hi Ed! Thanks for the great write-up and the nice words about the Temple. We had no idea you were one of our worshippers! :)

I feel it's my duty to pass great URLs on when I find them. Keep up the excellent work!