It’s that time of year again, Jerry Lewis Telethon time! These days I’ve taken to paying tribute on the Funhouse to the cinematic Jerry, since the ’thon itself is clearly in its waning years, and I find a lot more enthusiastic “old show biz” in the NYC portions of the show, hosted by the unstoppable Mr. Tony Orlando.

So, since I’m on the topic of Jer the movie performer and “total filmmaker,” I must single out the YouTube poster of the week, a person who wants to be known as LoveJoeCartwright. This UK fan-poster has put up close to 900 videos relating primarily to Dean and Jerry — and also Michael Landon, Roy Orbison, and Gene Pitney. The Dean stuff consists of postings of his songs, like one of my fave earlier tunes. Also Westerns like Five Card Stud. The must-see (although here it is presented without letterboxing) is Billy Wilder’s masterful Kiss Me, Stupid:

And, for sheer Sixties superspy fun, Phil Karlson’s The Silencers:

The poster has put up a LOT of Dean and Jerry on the radio, and also most of their feature films. The complete Martin and Lewis films up are My Friend Irma, My Friend Irma Goes West, At War With the Army, Sailor Beware, Jumping Jacks, The Stooge, Scared Stiff, The Caddy, Money From Home, Living It Up, Three Ring Circus, You’re Never Too Young, Hollywood or Bust, and Pardners

I enjoy the M&L features, but most hardcore fans will readily admit that the most entertaining work the team did was on The Colgate Comedy Hour. A sample: 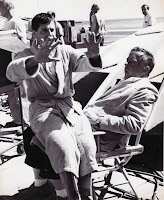 Solo Jerry is an up-and-down affair, with the most essential pics to watch being the early films he directed himself and several utterly charming films directed by the master, Frank Tashlin (seen to the right with Jerry on the set of It's Only Money in 1962). The complete films up on YT are The Sad Sack, Tashlin’s Rock-a-bye Baby and The Geisha Boy, Don’t Give Up The Ship, The Bellboy, Tashlin’s Cinderfella, The Ladies Man, The Errand Boy, Tashlin’s Who’s Minding the Store?, The Patsy, Tashlin’s The Disorderly Orderly,
The Family Jewels, Boeing Boeing,
Three on a Couch, Way Way Out, Don’t Raise the Bridge…, Hook, Line and Sinker, Which Way to the Front?, and Martin Scorsese’s masterpiece (from the period when Scorsese commanded worship, which has gone sadly the way of Leo) King of Comedy.

This week on the show I’m presenting short clips from one of the forgotten Jerry comedies, Tashlin’s tiptop It’s Only Money (1962):

And perhaps his most over-the-top film, his second “comeback” pic which never received a theatrical release in America — but which played in France as “You’re Nuts, Jerry!” — Smorgasbord aka “Cracking Up”:

Another poster, nicknamed “Safe in Pants,” has put up the best single Martin and Lewis movie, Frank Tashlin’s terrific Artists and Models: 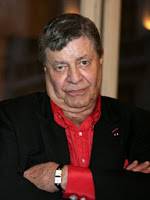 And please, now go to the “Watercooler to the World” blog and listen to the closest thing to a “carol” for this telethon season, “Rock Me, Jerry Lewis”
Posted by Media Funhouse at 3:23 AM