AM pop heaven: part the second 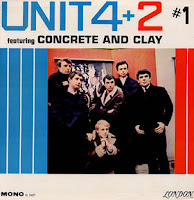 Continuing on from last week’s post, I offer two more hook-driven Sixties hits that will never, ever exit my cranium. First, the tale of a young lad who love the daughter of his bossman, the melodramatic and catchy-as-hell Billy Joe Royal 1965 chart-topper “Down in the Boondocks.” The song was written by Joe South, who had hits of his own around the same time. The song can be heard in in its thoroughly produced single version or you can view Billy Joe singing it live on Shindig:

And because one hook conjures another, I salute one of my fave-ever pop ditties which, unbeknownst to me, has been revived a whole buncha times. I was introduced to the awesome “Concrete and Clay” by the admittedly Seventies-mellow version of the tune by Randy Edelman. The original is the faster-paced and thoroughly awesome version by the Sixties group Unit 4 + 2 (which, naturally enough, had five members).

The song has the simplicity of a doo-wop tune with a bossa nova beat, a rock-solid hook, and blissfully corny lyrics. Little did I know that the sucker had come back several more times, including an oh-so-Eighties version by a German band named Hong Kong Syndicat. None of the cover artists produced as weird a visualization of the tune (well, actually there's neither concrete nor clay involved) as this 1999 bit of gender-bending bizness from former Dexys Midnight Runners’ lead Kevin Rowland. It’s a nice little what-the-fuck music-vid (Kevin does not make a good lingerie model) that proves the song is as indestructible as any great pop tune.